We’re now halfway through the 10 episodes of Stargate Origins, so the structure is a lot clearer. All of the main characters (beyond one dim-witted Nazi) are on Abydos in various states of danger. We’ve met the two Goa’uld characters, Aset and Serqet, who are generally more interesting than the flimsy heroes. The Nazis and Dr. Langford remain captured by Aset and can only wait for the next steps. They’ll need Catherine and her pals to step up and save the day. The stage is set for the big conflict between the various parties, but our time is short.

Only about 50 minutes remain in the entire show, and you can only accomplish so much in 10-minute episodes. Despite some fun moments, the limitations on money and time make it hard for Origins to really thrive. A lot has changed since I wrote about the first three episodes, however. Longtime Stargate writer and producer Joseph Mallozzi has initiated the quest for a new full series to extend the franchise. His presence has rejuvenated the fan base and made Origins’ success seem less essential for its future. Before diving into those efforts, let’s take a quick look at the two new episodes, which premiered yesterday at Stargate Command. 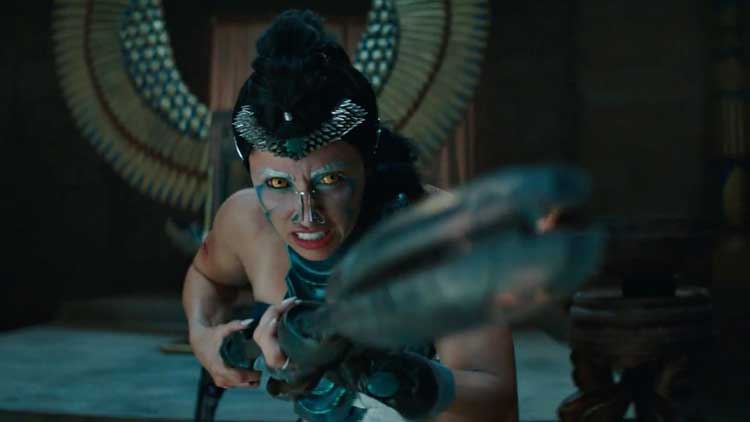 I love a good sci-fi adventure, and the classic premise of discovering an unknown world via the Stargate can work brilliantly. It’s a relief when Catherine, Beal, and Wasif leave the main structure and venture into the desert. That moment happens in Episode 5, however. They first battle with the Goa’uld warrior Serqet and have little chance against her. She’s played by Michelle Jubilee Gonzalez, whose career includes a lot of stunt work in TV and movies. Gonzalez is an imposing enemy, though the fight isn’t very thrilling.

I did enjoy seeing Serqet’s different type of staff weapon that worked for hand-to-hand combat. The large hook at the end makes for an effective tool in close fights. It’s cool to see a little action on Origins, but this scene feels a bit awkward. The staging appears off, and the room’s tight quarters make for a limited fight. The appearance of the transportation rings is an exciting callback, especially to the movie and early SG-1 seasons.

Before encountering Serqet, the confused trio exits the Stargate and arrives on Abydos. I like the small touch of the ice on Catherine’s face, which is a callback to the early days. Less exciting is the over-the-top reaction from Beal, who’s just a painful character. He veers between obnoxious and cheesy behavior, and I don’t see any chemistry between him and Catherine. Beal is mostly around to set up Catherine as the stronger character. Exchanges like this are a good example:

While her reply made me chuckle, it’s hard to care much about Beal. Yelling “Boo!” at the Abydonian tribe member they discover is such a jerk move. Ellie also slaps him when he suggests that Dr. Langford is dead, and it’s well-deserved for a lot of reasons. Wasif mostly seems like an afterthought to the pair, despite his cool discovery of the world outside. The attractive shot of the three moons and the dunes mostly sells the off-world location. I can’t wait to get a chance to explore a little bit of this outside world. 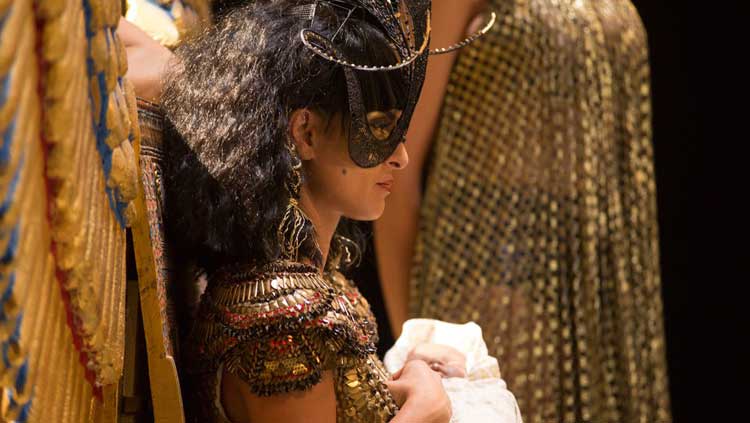 While Episode 4 mostly involves the fight with Serqet, its follow-up involves all the characters in some fashion. We check in with the Nazis, Goa’uld, and Catherine’s group within a packed 10-minute story. It seems fitting to have so much as we reach Origins’ midpoint. The most interesting part of Episode 5 is the conversation between Aset and Serqet. There’s a revelation that the baby is a harsesis, which is the show’s first big surprise. We learned on SG-1 (particularly in season four's “Absolute Power”) that this child of two Goa’uld is extremely powerful. While it’s unclear who the father is right now, Ra is a possible candidate.

We also learn that Aset plans to use the humans to ferment a revolution against Ra. I’m not sure how this can go well, but it presents her more as an opportunist than a generic enemy. The idea of Aset using the Nazis for her own devious plans intrigues me. We also learn of her mysterious resurrection, which might help to explain fans’ continuity questions. There’s a lot of plot to uncover in limited time, so I’m unsure how much we’ll learn down the road.

Less inspiring is the scene with the Nazis, who remain weird caricatures. My reaction is similar to Dr. Langford, who’s just over the entire situation. His only solace is that Catherine is back on Earth, and a split-screen shot reminds us of how wrong he is. She’s busy having a painful conversation with Kasuf (Daniel Rashid), the Abydonian tribe member. Catherine’s attempts to teach Kasuf her name feel straight out of an old colonial narrative. Her frustrating approach treats him as dumb simply because Kasuf doesn’t understand English. It’s bad news.

Kasuf is a familiar name to Stargate fans; an older version of him encounters O’Neill and Jackson on Abydos in their first trip. Erick Avari played Kasuf in both the movie and SG-1, but that character seemed unfamiliar with Earth in that film. It will be interesting to see how that is presented in upcoming episodes, if it’s addressed at all. His character is mostly around to draw comedy out of their cultural differences, and those jokes fall flat.

On a positive note, Wasif’s stabbing by a frightened tribe member is a shock. Seeing all that blood (and a possibly mortal wound) brings weight to a show that has felt very light so far. I did not expect Wasif to die, and the quick resolution with the Wand of Horus ends any speculation. Even so, it’s refreshing to bring actual stakes to this story. The battle with Serqet included limited tension despite her skills. The stabbing is the first moment that convincingly sells the danger of going through the Stargate, and I hope to see more in the future. 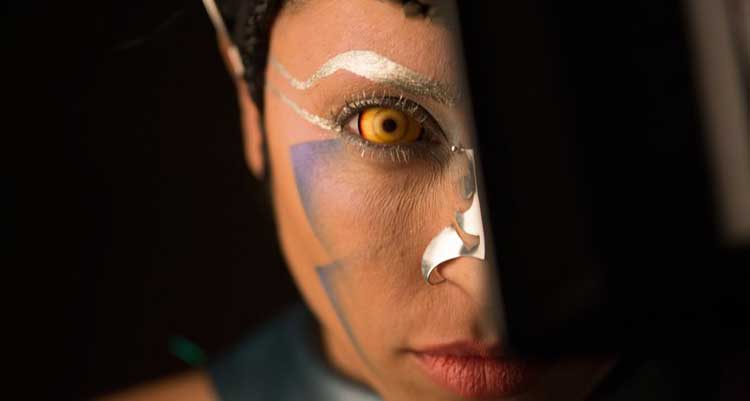 The most exciting news of the week was Mallozzi’s surprise announcement of a strategy to strongly encourage MGM to revive Stargate completely. In a blog post titled “Stargate – the next step!”, Mallozzi outlines his feelings about the future of the franchise. He clarifies that a reboot or remake won’t serve the best needs of fans or the series. We’ve seen the challenges in Origins with shoehorning a story into Stargate’s past. Mallozzi pitches the idea of going back to the guys that helmed the ship for many years – Brad Wright and Robert C. Cooper.

What I love about the idea is how much it makes sense and isn’t just a pipe dream. It also unites the fans with a single objective – support the creation of a new series that continues the ongoing story. The possibilities for this show are endless; it could involve beloved characters from all three series plus new roles that expand the storytelling universe. I’d love to see more of Stargate Universe (SGU), but why stop there? You could explain what happened to The Destiny and involve Atlantis, Earth, and more all within a single package. Why not build on past success instead of recreating it?

If you’re a fan of any part of the Stargate world and want to help this cause, your first task is easy. Follow @StargateNow on Twitter and tweet out support with hashtags like #StargateNow and #DrivetoRevive. I’d also suggest following Mallozzi @barondestructo; he posts regular updates about the project. If you aren’t on Twitter, there’s also a Facebook page open for Stargate Now. This is just the beginning of the initiative, but the response has already been so positive. Fans may disagree on SGU or Origins, but few can argue with the push for a full Stargate rebirth. Let’s make this happen!