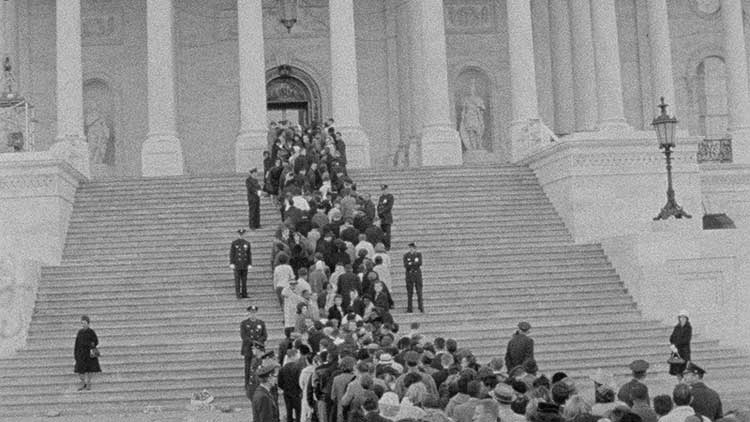 Back in November, I wrote a short piece about Robert Drew’s documentary short Faces of November with thoughts of putting together a longer piece about his work. It was shortly after Donald Trump’s surprise victory, and I was still in shock about the results. While I’m less freaked out with our situation, the negative impact remains every day. I haven’t decided to dive back into Drew’s films since that point. It wasn’t a conscious decision but probably related to a desire to escape from a very different vision of the presidency.

I decided to post my thoughts on Faces of November now instead of waiting to pull together a longer essay. I did see Primary back in 2011, and I’d like to dive further into his works on Kennedy and others. Perhaps completing this article will inspire me to allot the time to uncover more gems from Drew’s career. Without further introduction, here is my unpublished review from November about his 1964 film.

We’re living in difficult times following an election result that has traumatized many of us. Even so, it’s still hard for me to contemplate the national climate following an assassination. This is particularly true for a popular leader like John F. Kennedy. Faces of November does an excellent job in capturing the outpouring of grief in the faces of onlookers at the funeral.

This Robert Drew documentary doesn’t overdo the importance of the historical event. Instead, he places us with the people as they say goodbye to Kennedy. We see the resolute look on Jacqueline Kennedy’s face as she tries to stay strong. Bobby Kennedy stares into space like he’s seen death itself. No dialogue is needed to feel the grief emanating from their entire bodies.

Faces of November opens with an image of trees while gun shots blare in the background. Rain pelts the Capitol at night and the wind blows strongly the next day. It’s like nature recognizes the blow to a nation’s consciousness. Drew doesn’t cram too much into the 12-minute timeframe. The camera stays with an interesting face and connects with us through the onlookers’ emotions. Soldiers maintain their composure as the camera draws close looking for a crack. Men and women openly cry while “Taps” plays at the funeral.

It’s a quick glimpse at a pivotal U.S. event, yet the people are the story. The lone exception is a grand shot inside the Capitol, and it’s more about beauty than scale. It’s a quick reminder of what we all can do, despite the odds against us.