Two by Chris Marker – Three Cheers for the Whale and Junkopia 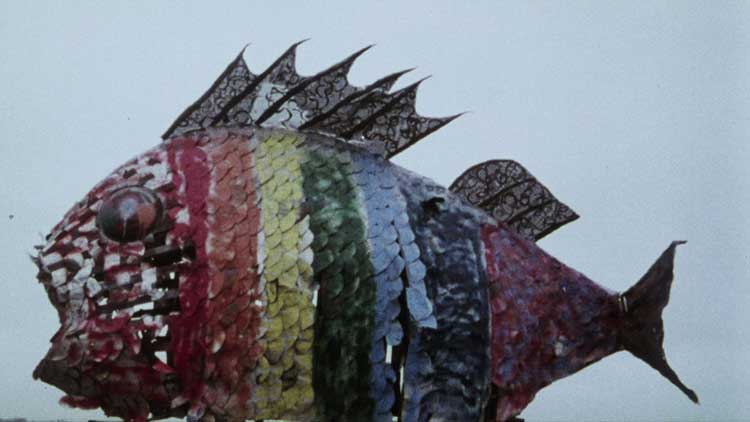 French director Chris Marker is known primarily for his 1962 sci-fi short La jetée, which inspired the Terry Gilliam film Twelve Monkeys. That film remains quite powerful today, but it only scratches the surface of the work from this prolific filmmaker. Marker worked steadily for more than six decades going back to the early ‘50s. A large portion of his career has included documentaries like 1983’s Sans Soleil, a brilliant look at connections across different cultures.

Marker rarely takes the expected road when approaching a documentary subject. His films often maintain an eerie quiet because they aren’t packed with explanations. He is a skilled thinker who is able to put together an interesting film with limited resources. La jetée is mostly just a series of still images, but its story resonates because of the excellent craftsmanship. For this article, I caught up with two of his documentary shorts that had previously escaped my attention. Each is remarkable in its own way and shows the breadth of Marker’s talent. 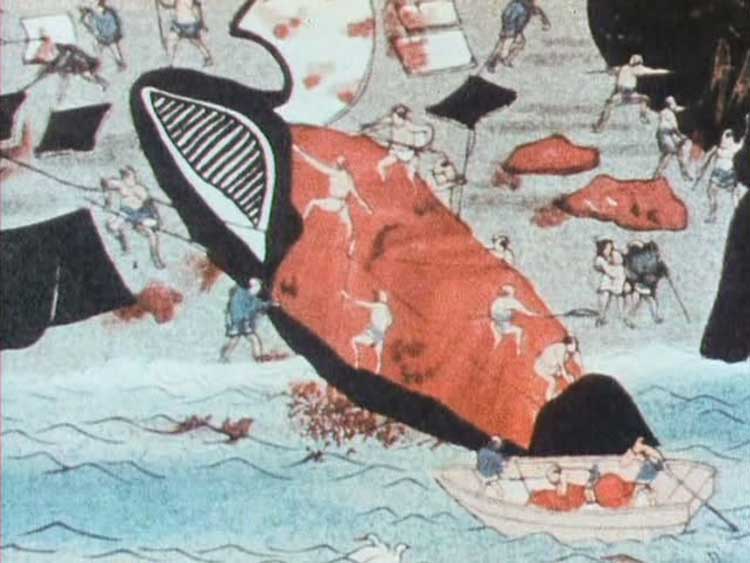 For this 17-minute short film, Marker teamed up with Italian filmmaker Mario Ruspoli to offer a quiet plea for protecting whales. Composed mostly of still photographs and paintings, this piece makes a convincing case against industrial whaling. Leonard Lopate and Emily Hoffman provide the narration for the English version, which was prepared by Marker in 2007. Their words help chronicle the history of whaling from the Eskimos’ utilitarian approach to the factory-like approach of Japan. To the latter group, the whales’ status is now solely for commercial use.

This material hardly feels new today, particularly given the spotlight on films like Blackfish and The Cove plus the TV show Whale Wars. There’s an interesting connection between that series and this film in the form of the Japanese whaling vessel the Nisshin Maru. It appears briefly here and was pursued by the Sea Shepherds on the show. It reminds us of the long history of whaling, which was already a major issue in the ’70s. The message of this film is positive about love for whales yet doesn’t shy away from the dangers posed by humans.

The final section of Three Cheers for the Whale includes harrowing footage of a whale being shot and killed by a harpoon gun. The idea that “nature is no longer neutral” continues today with regular attempts by politicians to gut the environment. It’s too easy to look at countries like Japan and Norway as the lone enemies. We do plenty on our own each day to make wildlife the enemy. Marker and Ruspoli’s work remains poignant in our ugly modern climate. 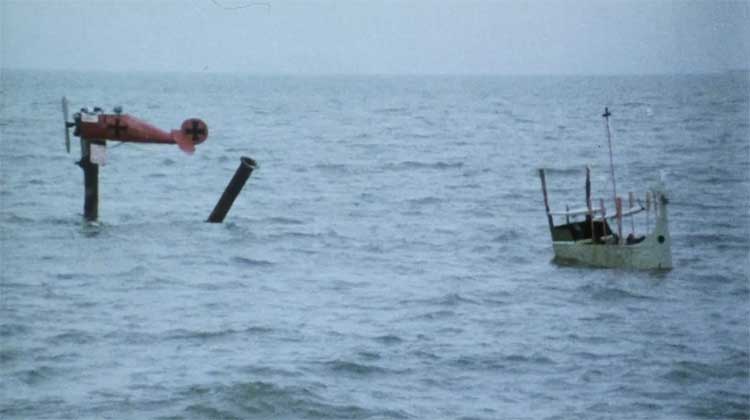 Our modern world is constantly moving, particularly for those who live in the cities. It’s rare to experience a moment of calm without cars, machines, and other people infringing on our space. When we see a quiet place, it can feel eerie to escape the madness. Marker captures that sensation in his 1981 film Junkopia. The six-minute short presents a collection of artful contraptions on the beach near San Francisco. Ominous music and ambient sounds just add to the post-apocalyptic atmosphere of this undisturbed spot.

The “junk” in this location includes driftwood sculptures in the shape of a turkey, an airplane, and even a moon lander. The work from the anonymous artists washes away due to the tides, so a few are seen floating out in the water. Although they occupy a tranquil setting, the art can also deliver chills when presented in a different way. Marker shoots the shadow of an old sign that resembles a looming monster when shot from that perspective. He reveals a mastery of creating moods and shifts gears with a single cut.

The illusion of Junkopia is shattered when Marker cuts to a highway and reminds us of the daily grind. There’s an ugly contrast between the cars slowly moving along the freeway and the creative expressions on the beach. It’s a glimpse at a place that no longer exists, and the sense of loss permeates this footage. Marker shot it with a Zoetrope Studios crew during the production of Sans Soleil and captured a moment in time. The final shot of a wooden boat drifting away in the waves says it all. It may seem like junk, but Marker finds plenty to make them worth a look.
Documentary Film Review