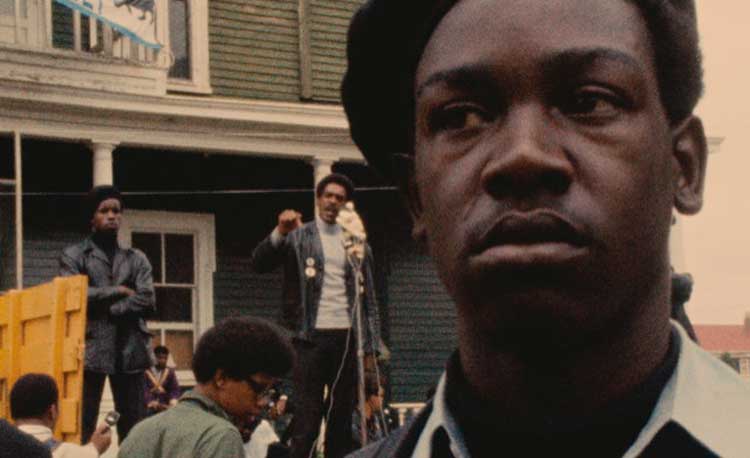 It’s easy to look back at the Black Panthers as a small piece of history from a chaotic time. Founded in 1966 and active until the early ‘80s, the Black Panther Party took a militant approach to black nationalism. On the other hand, they also promoted education and built social programs that made a difference in the community. Agnès Varda’s 1968 short film Black Panthers gives an up-close look at a group that was hardly one-note. Also known as Huey, this 28-minute documentary offers a human portrait of a complex organization.

The opening shot depicts a sign displaying the words “Black is Honest and Beautiful” in large letters. This statement reminds us that the Black Panthers had an uplifting message. Shots of kids playing and dancing at the outdoor event are quite a contrast from the usual images. Despite the live music and happy children, an unidentified female narrator reminds us that “this is no picnic in Oakland”. It’s part of the “Free Huey” movement to protest the arrest of co-founder Huey P. Newton for the shooting of police officer John Frey. Varda gives a snapshot of the Black Panthers at a specific moment in their history and reveals quite a bit in a short time.

Varda’s camera delivers some remarkable shots within the fly-on-the-wall framework. One stunning image presents an extreme close-up of a serious face in the foreground while a speaker addresses the crowd far in the back. It shows both the commitment and the education from the Black Panthers all in one shot. The speakers include Stokely Carmichael, who makes a convincing case that the U.S. has “declared war on black people”. It’s easy to connect his words to what we’ve seen recently with the killings of Michael Brown, Eric Garner, and many more.

There’s also an interview with Newton, who talks about his poor conditions in prison. He seems optimistic about his case but recognizes that the deck is stacked against him. Newton was only 26 at the time and looks even younger, but he makes valid points. It’s tricky because we only have a small portion of the story. Varda is French and presents the Black Panthers from an outsider’s perspective, but also with respect for their views. This empathy makes it easy to understand their struggle, especially given the forces marshaled against them.

Varda also focuses on positions of power for women in the Black Panthers and their choice to go with natural hair. Kathleen Cleaver is a memorable figure that speaks passionately about her role in the party. She’s now an accomplished lecturer and academic, and that’s no surprise after seeing this film. It’s clear from her brief scenes that she’s intelligent and committed to making a difference.

Black Panthers plays differently in the Trump era as many of us look for ways to resist his policies. A statement that describes the U.S. as “this racist nation” rings true when you consider our current leadership. Militant actions may not be the best choice today, but the commitment that we see from the Black Panthers does connect to the struggle now. An effective mix of activism, greater education, and a convincing message should help to change the tide. It helps to know more of the past, and this film offers a glimpse at a small part of the bigger picture.