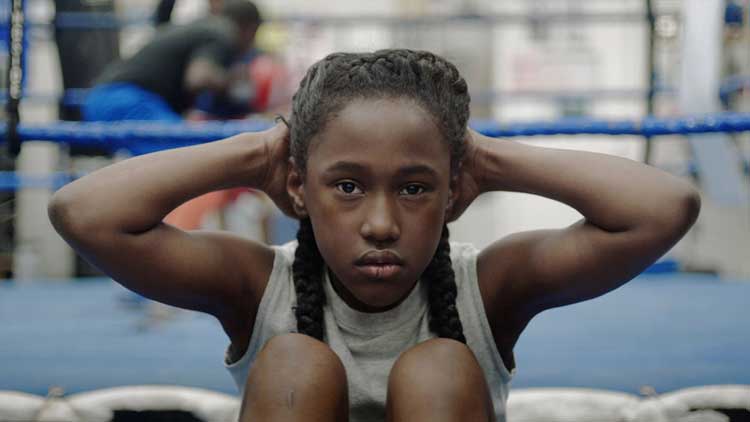 Our story begins with quiet shots of 11-year-old Toni (Royalty Hightower) training at a boxing gym. The camera pulls closely in to her face and doesn’t cut away. We’re quickly immersed within Toni’s world of the Cincinnati community center with seamless effort. She trains with her older brother Jermaine (Da’Sean Minor) and longs to join the drill team – the Lionesses. It would be easy to describe The Fits as a slice-of-life film, but that label is too limiting. In her directorial debut, Anna Rose Holmer crafts something more off-center than how it originally appears. Toni’s experiences don’t play out as expected, and the atmosphere becomes quite surreal.

Clocking in at just 72 minutes, this tale doesn’t feel like it needs another minute. Why are all blockbusters over two hours? They must justify the expense, apparently. Watching a contained story that makes its case with nearly every shot is refreshing. It’s also a plus to check out this film with limited prior knowledge. The first act seems to set up a look at how Toni will become a good dancer and learn about herself in the process. She does improve her skills, but little happens as expected here. When her fellow dancers start having “fits”, it sends Toni’s world into disarray. I experienced a similar feeling as an audience member.

The question hanging over the remaining time asks what is causing the seizures. Is the water contaminated? Are otherworldly forces at play? Holmer doesn’t try to explain the fits in a clear fashion, and that’s a wise choice. Instead, she builds a growing sense of uneasiness with each subsequent incident. The music from Danny Bensi and Saunder Jurriaans deserves awards consideration for how well it builds the mood. When Toni looks directly into the camera while the eerie sounds play in the background, a simmering fear grows inside us.

The final act arouses suspicions that perhaps the fits occur because the girls want them to happen. It’s a cynical take on the beautiful moments yet could speak to a teens’ need to conform. Toni’s friends ignore her because she hasn’t experienced the same thing. Instead of providing danger to avoid, the fits become a rite of passage. It’s no stretch to connect this moment to the shift into adolescence. There’s beauty in each fit despite the harm that’s happening to the subject.

It’s not surprising that Holmer collaborated with a real dance team (the Q-Kidz) as the performers. Their moves are far too original to come from actresses learning on the fly. These aren’t the expected group performances you might see in a Hollywood film. Instead, each girl shows her own style with remarkable agility. There’s striking intensity to the way they let loose and dare the others to match their efforts. This in-your-face quality is undercut by the way the fits reduce their control. The women are so powerful yet knocked down by this force.

Material in The Fits is rife for analysis from high-minded cinephiles, but that doesn’t take away from the joy in the movements on the screen. The climactic dance sequence is a beautiful display of life and energy that feels therapeutic in these troubling days. Diverse voices like Holmer’s (plus producer Lisa Kjerulff and editor Saela Davis) deserve a lot more attention. Kjerulff and Davis also co-wrote the script with Holmer (and comprise the collective Yes, Ma’am!), and we never hit expected beats. It’s a thought-provoking, moving tale that deserves a lot more attention.

The Fits is currently streaming on Amazon Prime. See this film.
2016 Film Review