Rogue One: A Modern Take on a Classic Adventure Story

We’ve reached a point with our technology where films are rarely massive events that draw audiences from every spectrum. It’s become a niche world thanks to greater options in TV, gaming, and other pop culture zones. There still are a few exceptions, however. Star Wars was the type of film (and series) that created obsessive fans for life. Parents initiate their kids into the cult at a young age through the movies, TV series, toys, and books. Now that Disney owns the franchise, they’re focused on building a new group of young fans that never leave. They’re also rewarding the patience of adults like me that became attached to the original trilogy in the ‘80s.

Rogue One is the latest installment in a series that will keep drawing huge crowds as long as films are relevant. Don’t get me wrong; I’m right there with the excited viewers. It took me a week to see it, but I wasn’t going to miss this event. I’m a few steps below fans that dress up as the characters and analyze every small link to the expanded universe stories. Even so, my mind will forever remember every little part of the original films (particularly Star Wars). I’m 40 and definitely a major part of the audience, and I played into Disney’s hands by taking my seven-year-old daughter to see it. We had a great time, and we were hardly unwilling participants either.

It’s unnecessary to describe the plot at this point. The storytelling is effective, but it’s already well-known to anyone that’s interested. I managed to avoid the specifics before seeing the film, and that improved the viewing experience. I watched each trailer a few times and understood the basic premise. It’s difficult to create a story where everyone knows how it will end; George Lucas struggled mightily to keep us engaged in the prequel trilogy. Director Gareth Edwards and screenwriters Chris Weitz and Tony Gilroy do a much better job here. The sense of inevitability doesn’t hamper the momentum too much. Even if Star Wars had never existed, we would understand how this type of adventure will function. The characters know this is probably a one-way trip. 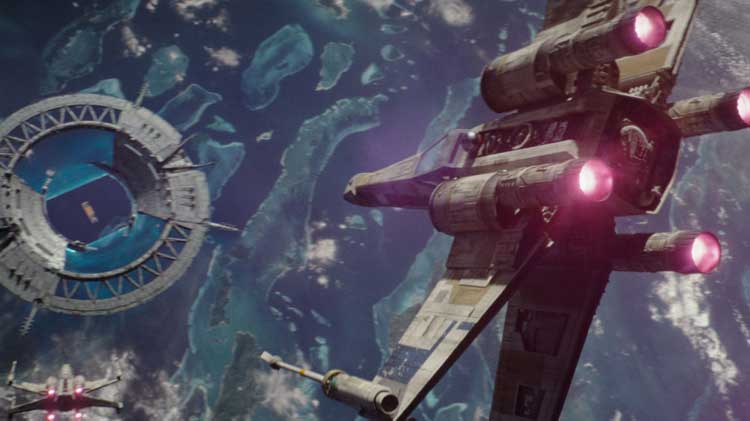 Rogue One benefits from the strong emotional connection that we feel to the Star Wars universe. We care about the fate of the rebels without unnecessary exposition. The stakes are clear, and witnessing the Death Star’s destructive power early in this film just reminds us of that fact. On the other hand, the familiarity is a crutch when fan service goes too far. The random appearances of Dr Evazan and Ponda Baba (from the Mos Eisley cantina) cheapen the project. I’d also love to have someone make the executive decision to retire lines we hear in every Star Wars film. Those quotes wink at the fans yet also take us out of this story.

Even so, some cameos feel organic and build a believable environment. The shots of the original Red Leader and Gold Leader (from deleted footage) in the attack on Scarif fall into this category. They’re familiar yet also work in the context of this movie. Darth Vader also connects because he’s directly involved in this story. Plus, it’s hard to argue with seeing him wipe out a bunch of powerless rebels in a lightsaber fight. He’s more frightening here than in any moment in the prequels. I know the Death Star plans get away, but I still wanted to shout “throw the plans out the door!” to the frightened rebel. It shows how much Edwards succeeds with this film.

I can defend most of the creative choices in Rogue One, but there is one striking exception. I recognize that advances in digital effects are one key to this movie’s success. However, the CG creation of Peter Cushing’s Grand Moff Tarkin is a mistake. Despite looking convincing at times, it feels unnecessary and appears slightly unreal in the eyes. Re-casting this character would have made sense and not been questioned. While paying tribute to Cushing, the choice to build his face digitally is distracting. That’s also true with the appearance by Princess Leia at the end, but it’s at least a quick shot. Tarkin plays a much larger role in the main story.

Looking beyond my few qualms, I found plenty to love within this film. The opening scene is set on a gorgeous planet and introduces key characters well. It’s easy to get on board with Jyn Erso (Felicity Jones) because the opener aligns us with her plight. Seeing her mother killed and father captured right in front of her would traumatize anyone. Jones under plays Jyn’s anger towards her childhood challenges well, and we can still see the emotional scars. There’s a lot riding on Felicity Jones’ shoulders, but she doesn’t perform like someone who feels the pressure.

The most important thrill for me is enjoying the classic adventure story. Jyn and Cassian (Diego Luna) inadvertently pull together a mismatched band of committed rebels for the daring quest. Donnie Yen is great fun as a blind man with connections to the Force. The conservative rebel leaders want no part of their dangerous plans, so it’s up to this small band to do it. The odds against them are great, yet faith still means something. I don’t mean to get too cheesy when considering their plight, but it’s only been a few hours since the credits rolled. There’s a reason that Firefly is one of my favorite shows. I’m drawn to characters that try to do the impossible (it makes them mighty!). There are fewer wisecracks here, but the spirit remains.

Rogue One is the first Star Wars film to portray the mess of battling a powerful enemy on the ground. That sense of loss is evident in the slightly mad face of Saw Gerrera (Forrest Whitaker). He’s killed civilians and committed brutal crimes to fight the Empire. There’s no black-and-white feeling in this story. The rebels commit murder in the name of liberty, and they often do the wrong thing. The deaths are largely bloodless, but we feel the weight of each one. It’s a Star Wars tale for the modern world, and it’s easy to make connections to the Trump era. Fighting an enemy with all the control takes sacrifice; hope is often gained through paying the ultimate price.