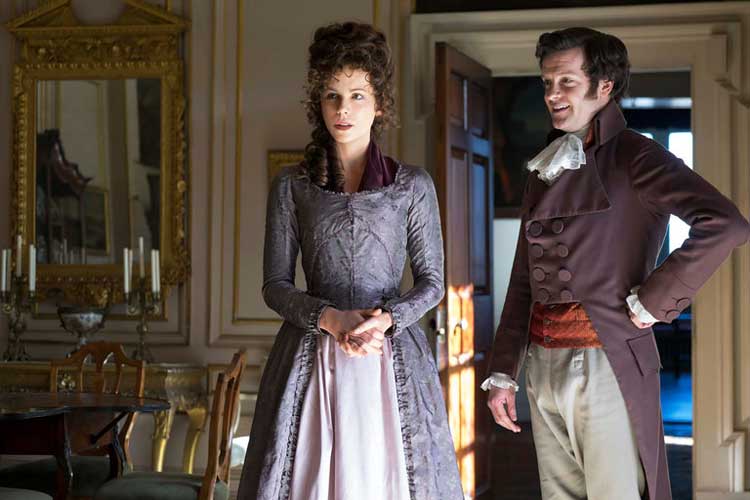 It’s difficult not to spend this entire review of Love & Friendship just raving about Tom Bennett. His comic work as the foolish Sir James Martin energizes the material from Whit Stillman. The wide-eyed Bennett injects the broad dose of silliness this film needs to counter all the proper behavior. Martin is basically the David Brent of this society; people tolerate him because of his status. The difference is that Bennett keeps his character endearing despite a lack of decorum. While others whisper in the shadows, he talks loudly about everything on his mind.

The surprising part of Bennett’s success is how little he appears. It takes a while for Martin to arrive on screen, and he largely occupies the background. Stillman wisely recognizes that spotlighting Bennett would be too much of a good thing. There’s little depth to this guy, and that lack of self-awareness drives other characters mad. Martin has lots of money, and that makes him a valuable commodity in a place where marrying into wealth is essential. A guy that speaks of the “12 Commandments” and jokes about peas is not a fabulous house guest. On the other hand, Martin is such a contrast from the guys around him that even his dumb ideas are likable.

I must also spotlight the great work of Kate Beckinsale as the lead; it’s easy to forget how charismatic she can be on screen. Her Lady Susan brilliantly twists guys around her finger and looks for every angle. The inventive ways that she hides her lack of money keep even the more suspicious people from seeing the truth about Lady Susan. It wouldn’t be proper to actually pay the woman who assists her; it would only hurt their friendship! Beckinsale has starred in five (!!!) Underworld films, and it’s refreshing to see her in such a commanding role. When Lady Susan isn’t on screen, the other characters spend all their time talking about her.

Love & Friendship reunites Beckinsale with her Last Days of Disco co-star Chloe Sevigny, though it’s a much different relationship between their characters. Sevigny’s Alicia Johnson is a pal who marvels at hearing of Lady Susan’s deeds. The pair has a relaxed camaraderie on screen, but it’s mostly a secondary role for Sevigny. What’s interesting is the way that both speak openly about the dim-witted guys that surround them. There’s no guilt about wishing for Mr. Johnson (Stephen Fry) to get a disease as soon as possible. It’s a man’s world, but the guys actually have little power.

Stillman is one of my favorite directors, and I’ve yet to dislike one of his films. That trend continues here, though I wasn’t as thrilled as I anticipated. This story is based on Lady Susan by Jane Austen, and Stillman doesn’t veer too much from the expected style. There are gorgeous costumes and country homes where characters look for marriage. The change here is that romance takes a back seat to the best situation. Lady Susan’s daughter Frederica (Morfydd Clark) still believes in love, but she’s young. Most characters are resigned to doing the best they can in the confines of this social construct.

I’m drawn to Stillman’s biting and witty dialogue, and there’s plenty on display in Love & Friendship. Lady Susan is the perfect character for Stillman to convey his usual style. The screenplay feels a bit like a throwback to indies from the ‘80s and ‘90s. Stillman injects his signature wit into the mix, and it’s a pleasant experience. Beyond the work from Bennett and Beckinsale, I don’t see as much that makes me want to dive back into this film. I’ve watched Stillman’s other four films many times, particularly Metropolitan. The Austen source material just wasn’t as enticing beyond the great work from Beckinsale and Bennett. Despite these reservations, I’m excited that Stillman has found success and can’t wait to see what he does next.

Love & Friendship is currently streaming on Amazon Prime and is definitely worth your time.