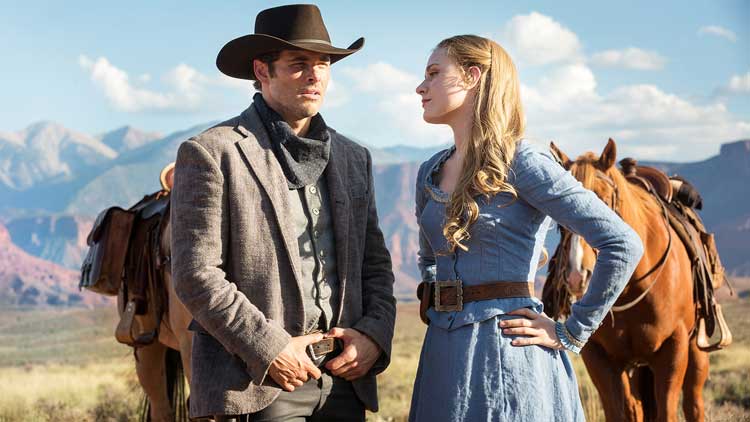 Few series have arrived this year with more anticipation than HBO’s Westworld. Loosely adapted from the 1973 film written by Michael Crichton, it strives mightily to become the next must-see drama. HBO has invested serious dollars (reportedly around $100 million) into building another hit. Creators Jonathan Nolan (Person of Interest) and Lisa Joy Nolan (Burn Notice) have solid TV experience but are facing massive expectations. Can they build a one-hour drama with real staying power? The premiere episode “The Original” shows great promise, but there are a few warning signs that could signal problems if they aren't rectified.

Before continuing, I should give you the obligatory spoiler warning. I will be discussing the entire episode in the upcoming paragraphs. Still here? Let’s do this!

“The Original” begins on the cold, dead eyes of Dolores (Evan Rachel Wood). An unseen voice says “bring her back online”, so there’s little mystery on her status as an android host. The Nolans’ script dives right into the Westworld universe and forces us to keep up with them. It’s wise to avoid the big expository speeches (at least for now) and let the story breathe. After the prologue with Dolores, it’s time for gorgeous outdoor vistas and a town straight out of a vintage Hollywood Western. We also meet the upbeat romantic cowboy Teddy (James Marsden), brothel madam Maeve (Thandie Newton), and the usual outlaws and grimy types populating the streets. It all runs like clockwork, so it’s no surprise when the real architects appear.

The big reveal of the Truman Show-like view above the world comes just 17 minutes into the episode. Given what we already know from the original film and the marketing, it makes little sense to hold the twist back for too long. On a less confident show, this moment would happen at the end of the premiere. The reason it comes now is the importance of the humans (we think) that maintain the park. We spend a lot of time with the overseers and their internal politics, which isn't that exciting. However, this focus does expand the show’s world and allows for a larger mythology behind Westworld’s real purpose. Unfortunately, it also leads to some clunky and obvious dialogue.

Anthony Hopkins is the right choice to play the Hammond-like creator Dr. Robert Ford. He’s now a secondary figure that tinkers with his work and muses about what they’ve done. Hopkins finds the right mix of curious evil and regret. But he also utters lines like “they don’t make anything like they used to” while the corporate honchos take over. We get it. The humans are the real villains, and the hosts just follow their programming. This is hardly new territory, so I hope the writers find more nuance as the show progresses. Having programmer Bernard Lowe (Jeffrey Wright) say “they all rebel eventually” is also way too on the nose about the main themes. He could basically just claim that “life finds a way” if we’re going to be that obvious.

The good news is that there is plenty to discover about the mystery. When the host playing Dolores’ father develops a “glitch”, the results are creepily intriguing. This is more than Yul Brynner killing tourists like he’s The Terminator. There’s history in Westworld that should be fun to uncover. The newcomers that patronize the park are secondary and barely register as real characters. It’s all about finding what’s behind the curtain. We do learn that Dolores is the park’s oldest host, and her perceived happiness masks a lot more. Shots of flies landing on the hosts’ faces are all over this episode, so a final scene with Dolores killing one says plenty.

One hesitation that I have with raving too much is the sadistic behavior throughout “The Original”. In particular, Ed Harris’ Man in Black gleefully beats and rapes Dolores early in the episode. The scene largely happens off-screen, but it’s still a lot to endure so early. He also tortures and scalps another host to gain information. Harris is a master at playing this type of grim character and leaves a strong impression. On the other hand, the show aligns a bit too much with the Man in Black. He’s portrayed like a cool loner on a quest for the game's next level. The Nolans must be careful not to condone such vile acts. Dolores may be a host, but she looks like a woman. Given our modern culture, it’s too easy for shows to follow typical gender stereotypes.

Westworld’s killer premise offers many opportunities for interesting stories. A theme park with hundreds of intersecting arcs is fascinating. It’s basically a “choose your own adventure book” that’s come to life. These are not just tailored scenes built for certain customers either. The loops happen even when newcomers decide to avoid them. It’s an evolution from Disney’s Pirates of the Caribbean attraction; the animatronics there still go through the motions even when no guests are riding the boats. The Man in Black is the equivalent of the guest that sneaks into Disney’s backstage areas. He’s presented as a human, but I have a theory that he’s an earlier model of the hosts looking for a way back to Ford. His pursuit feels too personal to just be from a guy that’s grown overly engaged in Westworld.

The skilled ensemble cast sells the potentially ludicrous material. There’s even a blink-and-you-miss-it appearance from the gravel-voiced Michael Wincott as Old Bill. Wright and Shannon Woodward also bring much-needed grace to the programmers on the front lines. Neither character seems thrilled with serving their corporate overlords, but they’re committed to fixing their products. The centerpiece in “The Original” is Evan Rachel Wood, who has the premiere’s most challenging role. Her drastic shift between glee and cold nothingness isn’t an easy switch, but she nails it. When Dolores experiences terror from The Man in Black and sorrow at Teddy’s death, we feel it right with her.

HBO is banking on Westworld to be its next prestige drama and follow in the footsteps of Game of Thrones. The premiere feels weighty and not always by necessity. It wants so much to be taken seriously but is rather silly when you think about it. There’s a brief moment where the bandit Hector Escaton (Rodrigo Santoro) reveals that B-movie energy while robbing the town. We need more of that style. It’s great to tackle serious themes, but sometimes it’s fun just to kick back and start a little mayhem. With the world building mostly completed, it should be easier to include more levity now. Having a piano play Soundgarden's “Black Hole Sun” is goofy, and I like the small touches. They help make the premise click and avoid falling into the trap of being too “important”. With some slight tonal adjustments, Westworld could become a thrilling series.