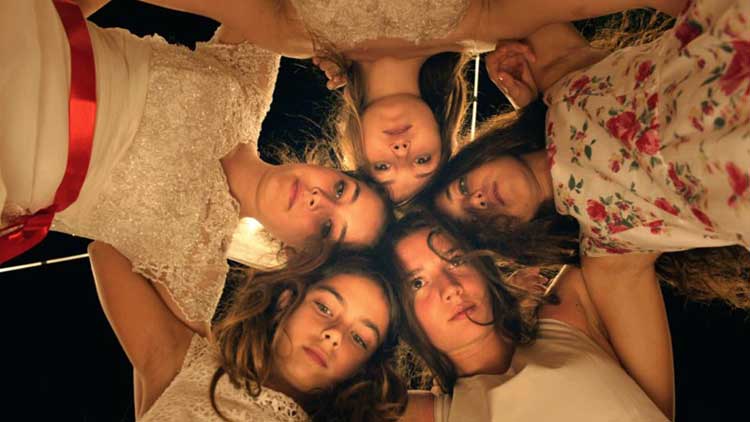 If anything positive has come out of our current election cycle, it’s been opening the door to unspoken problems. In particular, pervasive institutional sexism is now discussed freely. Donald Trump is not an outlier and symbolizes systemic behavior. The individuals are at fault but act with the approval of a much larger group. This fact stands at the core of Mustang, Deniz Gamze Ergüven’s frank look at constraining social constructs. Viewed through the eyes of five young sisters, the sexism that drives a northern Turkey community is laid bare.

Released in late 2015, Mustang tells a specific tale but with plenty to say. I have two young girls and don’t plan to weld bars to our windows, yet the story reminds me to be wary of small daily gestures. In this film, everyday propaganda on the radio proclaims that feminists “refuse motherhood”. What should be a lively home becomes a dour “wife factory” to help maintain the status quo. Men like the domineering Uncle Erol (Ayberk Pekcan) will do anything to maintain power.

Imprisoning the sisters early ensures continuation of trends that work in men’s favor. A culture of fear extends to the older women, who present the girls to other families like items at an auction. Women like the grandmother (Nihal G. Koldas) understand the problems but don’t know anything else. It’s easy to fall into familiar patterns and just accept them.

What pushes the girls into captivity is innocent frolicking with boys in the water. There’s nothing scandalous, and the bad result shows the lack of agency for young women. This scene also confirms the adults' pre-existing suspicions. They subconsciously wait for a chance to subvert the next generation. The grandmother is abusive in public, but her society encourages that behavior. Erol’s actions cross another line and treat the girls as subhuman. Subjecting them to a “virginity report” treats their sexuality as a prize he can sell. They’re worth nothing to the community without their purity.

Despite the confinement, the sisters’ world remains a place of wonder for a while. Ergüven presents nature outside as bright and inviting. Shots of the five girls intertwined together reveal their power with each other. It’s a sharp contrast from a similar scene at a funeral late in the film that is far less empowering. No matter what the town enforces, there’s still beauty there. Scenes with adults locking away the phone, computer, and other modern devices lack that serenity. The camera totally avoids showing the grown-ups’ faces during this scene. No individual is making this happen; it’s a collective fear of female sexuality and power that drives it.

Mustang is not a tale of rebellious teens wrecking their lives. Most bad behavior comes directly from captivity. When Ece (Elit Iscan) has sex with a stranger in town, it’s because she’s lost her will. Her chosen fate afterwards reinforces the dangers of trapping the girls. The marriage meetings are horrifying examples of their lack of power. The grandmother is a tool of the patriarchy to maintain control. With each successive event, the cruelty of this fate becomes clearer. The men then arrive and “settle the matter” like a real-estate transaction. Even when a girl marries for love like Sonay (Ilayda Akdogan), it’s barely under her control.

The football match is the last joyful interlude for the five sisters. Their efforts to escape for a few hours of fun resemble a prison break. The beaming face of Lale (Günes Sensoy) reminds us of how innocent their lives should be. The close-up shot of the girls dancing shows how the game doesn’t matter. We don’t even see the game; it’s all about freedom. By stifling their childhood, the adults create a self-fulfilling prophecy. The match’s aftermath reminds us that the older women are not dim followers. The aunt’s silly efforts to cut the power and avoid discovery are helpful. The problem is how rare they are. She buys the girls a fun day but little else.

The centerpiece is Lale, who has no interest in following her sisters’ footsteps. Her efforts to prepare the escape keep the story proactive. Even when bad things happen, there’s hope that Lale might avoid them. Günes Sensoy makes it easy to root for her; there’s no way she’ll take it. Lale’s friendship with Yasin (Burak Yigit) is a rare connection away from the house. He’s in his 20s but isn’t the problem, which shows a little hope for the future. Yasin lends a helping hand, but Lale makes it happen.

Mustang’s conclusion works because of its simplicity. There’s no way to know how they’ll fare, but the most important thing is escape. Lale deserves better, even if it comes in a mysterious city. There are real options beyond a forced marriage in this free community. The finale still feels a little sad, however. The adults will not change after one setback. Circling back to the political climate, will the current discussions lead to real progress? We’re a long way from major change, but it’s a step in the right direction. Accepting the status quo is the worst solution.
2015 Film Review