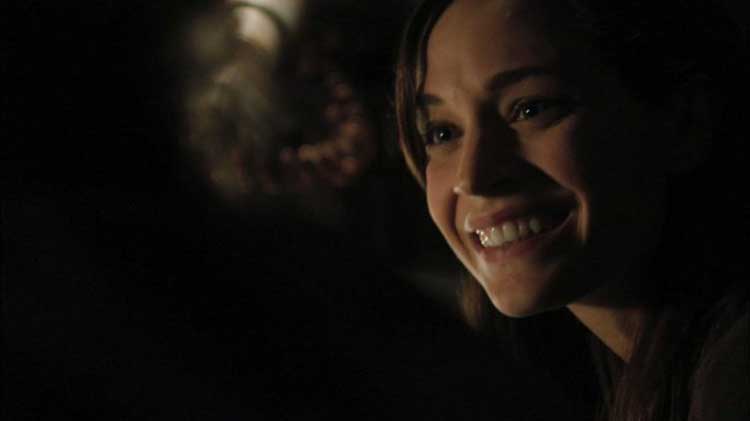 We’ve reached the point of the season where so many intersecting story lines are coming together. There’s a risk of piling exposition on top of exposition without keeping the audience engaged. Thankfully, the SGU writers find interesting ways to build on past work. “Sabotage” resolves the “Lost” main plot, introduces a new character, and circles back to a nearly forgotten supporting character. When you add in pursuing aliens and a climactic space attack, it’s hard to miss. Life keeps getting harder on the Destiny, but characters are now willing to step up to ensure their survival. They’ve become a more cohesive group, and each new success brings them closer together. The sharp division between Young and Rush feels like a thing of the past.

“Sabotage” functions best as a look at how characters are growing stronger. Wray’s choice to switch bodies with the quadriplegic Amanda Perry (Kathleen Munroe) is quite brave. Rush lets his outer defenses break down while spending time with Perry. Franklin (Mark Burgess) also sacrifices his body for the sake of everyone on board. The growing challenges remove the pettiness and help people show their value. And these obstacles are just a set-up for greater issues on the horizon. Enemies are lurking everywhere, and the Destiny is a valuable prize. 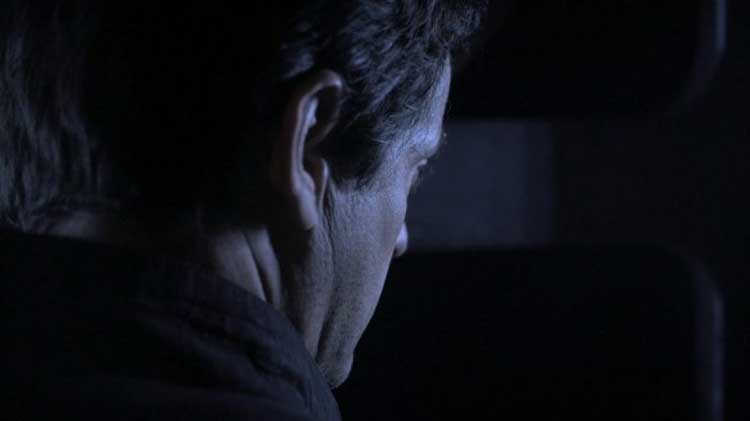 The team environment is evident in the opening sequence as Young gives a speech about the fates of Scott, Chloe, and Eli. We begin with Young shaving in the mirror and feeling the weight of the world. A striking over-the-shoulder shot follows him from his quarters to the gate room for the announcement. A glance at the crowd shows committed faces with no doubt about their leader. It’s a sharp contrast from only four episodes ago in “Divided” when the civilians mutinied. When Rush calls him with news about falling short of the next galaxy, they discuss the problem together. Neither fully trusts the other, but they’ve developed a solid working relationship because of the conflicts.

This cohesion also shows in the work from Brody and Volker, who disagree but have a say. SGU is still different from SG-1 and SGA, but the characters are becoming a team in that vein. They’re working to solve problems under difficult circumstances within new territory. There’s no instruction book for the Destiny, particularly when it crosses large galaxies. Even with all his knowledge, Rush needs help from Perry. James can’t go through with being a quadriplegic, so Wray steps up to fill the gap. This crew will only survive if they work together, and it definitely saves them in this case.

The mid-episode music sequence does a good job illustrating mundane life on the ship. Julian Plenti’s “Only if You Run” strikes the right tone as people just live. Greer gets his head shaved, Brody creates a new alcoholic concoction, James feeds Franklin, and Scott and Chloe lay silently in bed. The shot of crew members running while the title lyrics play is way too on the nose, but it doesn’t kill the moment. This montage reminds us of how much downtime occurs when space battles, explosions, and other challenges aren’t happening. We rarely saw these moments in earlier Stargate shows, and they’re commonplace in this lived-in environment. 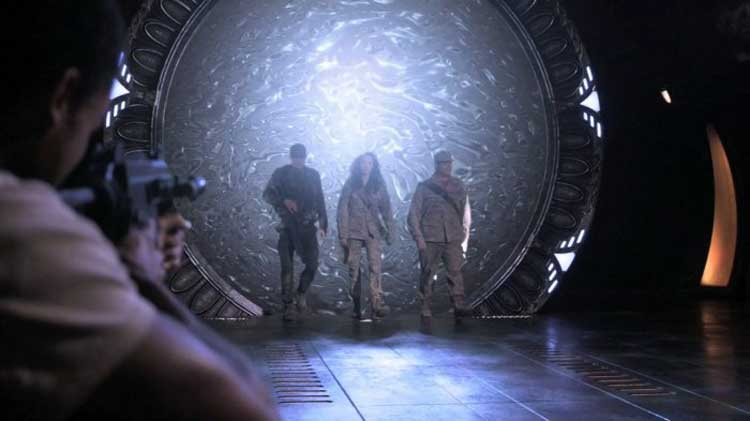 The episode title implies nefarious intent with the sabotage, but it’s actually just bad luck. James’ inability to handle being paralyzed gives the aliens a chance to control her. It shows just how precarious the situation is aboard the Destiny. Even a minor slip-up could lead to the end. It’s a little frustrating to see the writers again have James fall short, but she handles it well after the fact. The interesting part is how the explosion inadvertently saves Scott, Chloe, and Eli. After trying mightily to reach the Destiny and failing, they succeed through random chance. The blast also offers a chance because it removes the FTL drive’s weakest link. Everything feels strangely convenient, but it only works if the characters take advantage of the opportunities.

I have mixed feelings about how the writers save the lost trio. It doesn’t seem earned and is a loophole to escape the narrative box. On the other hand, it shows how much the crew is at the mercy of other factors. They’re learning more about the Destiny each day, but they still aren’t equipped to survive. Unlike the superheroes of past series, this lack of skills helps us connect with these characters. Eli is brilliant but still figuring out what to do. Their return does give us a touching moment where Eli gives Rush back his glasses. The silent exchange says a lot about the respect between them. They’re becoming friends and are no longer a random collection of strangers with no emotional bond. 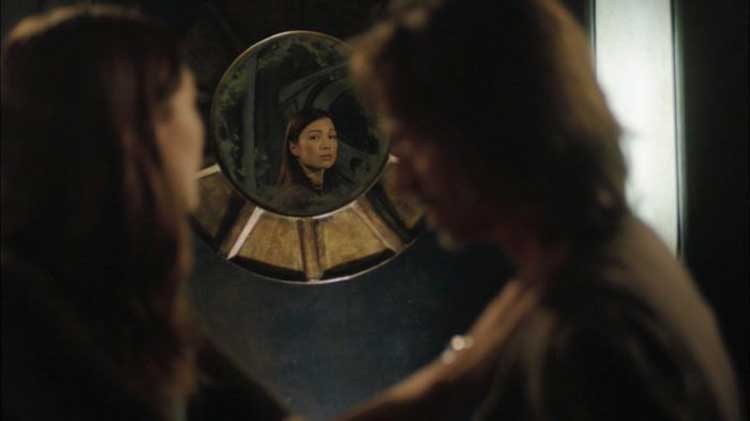 The story’s emotional center is Perry, who gets the first chance to move freely since she was nine. She joins the Destiny to help fix the FTL but can’t help but enjoy this rare experience. Amanda describes it “like a dream come true” despite their tough situation. Another factor is the chance to spend time with Rush (Nick to her), who is a crush from her past. He’s also quite fond of her, and the informal way he calls her Mandy says plenty. They’re a great match in a lot of ways, though his mourning of his wife and her physical state make it trickier. Kathleen Munroe does an excellent job in showing both her excitement and uncertainty about their connection.

A key scene highlights both Perry’s interest and the added complications of the communications stones. If they have sex, she’s doing so in Wray’s body. This happened previously with Young and Telford in “Earth”, but it’s still murky territory. Rush’s hesitation is partially for that fact but also due to reliving his wife’s illness in “Human”. Robert Carlyle again adds so much with limited dialogue. We can totally sympathize with a guy who needs love but still can’t move forward after his wife’s death. Nick and Mandy could work as a couple, but the stones add some major complications.

I wasn’t aware of the controversy surrounding Perry’s character until recently. Watching the episode without that knowledge, there’s little that seems too problematic. Munroe’s wide-eyed approach to the character reminds us of just how magical these moments are for Perry. The communications stones create an interesting discussion about ownership of our physical selves. When Wray uses the stones to switch with Perry, does she allow for sex? The same questions would apply when she returned home to her girlfriend Sharon (Reiko Aylesworth) in “Life”. There’s no simple answer, but the questions are handled with respect throughout this episode. 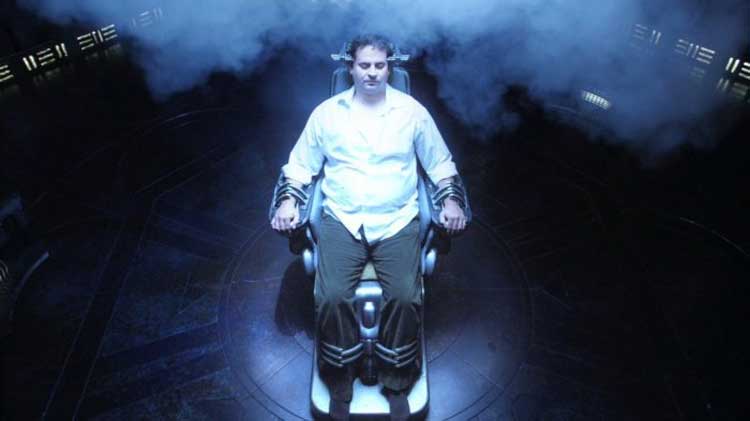 A recurring theme in “Sabotage” is how far each character will go to save their friends. Young is ready to sit in the chair before Franklin intercedes, and that move would likely fry his brain. Wray becomes a quadriplegic to bring Perry on board. Sharon stops her life on Earth to care for Wray despite her appearance as Perry. TJ convinces Young to keep her involved despite her pregnancy. They’re building a community on the Destiny, and everyone is contributing to ensure their survival.

Most importantly, Franklin accepts his fate and returns to the device that destroyed him. His choice to sit in the chair in “Justice” was presented like an act of cowardice from a weak man. This story reframes that moment is a precursor to this brave sacrifice. What makes the scene click is the mystery behind Franklin’s disappearance. There’s little idea of what happened in the ice-cold room. It’s another reminder that a lot more exists on the Destiny that what we’ve seen thus far. More discoveries are coming, and not all will be friendly encounters.