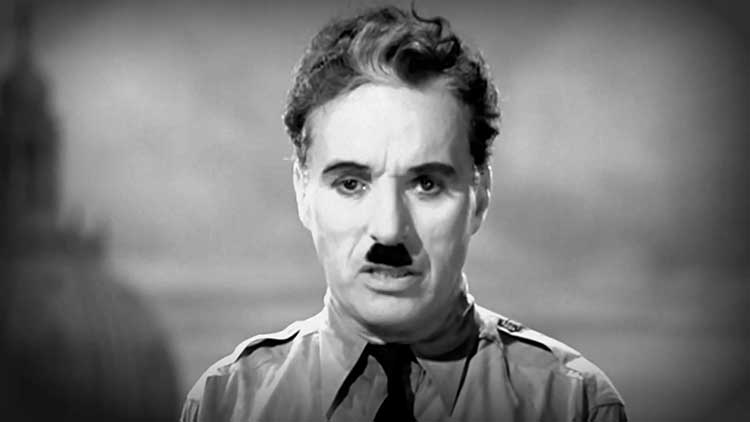 Rarely has a film included a finale so powerful that it makes the rest of the story fade away. When Charlie Chaplin turns to the camera and makes a plea to humanity in The Great Dictator, it lifts the story to another level. He breaks the fourth wall and blatantly expresses the film’s mission statement to remove any doubts. Costumed to mimic Hitler, Chaplin warns of the “machine men with machine minds and machine hearts”. After two hours of satirizing the military, Chaplin emotionally brings it all together for us. The film's jokes provide cheap laughs for a moment, but they only click if there’s more beneath the surface.

Beginning with the phrase “I’m sorry, but I don’t want to be emperor”, Chaplin delivers a long monologue that’s a tricky proposition. If he doesn’t convince the audience, this moment could derail the movie. The somber look on Chaplin's face eliminates any doubts. Watching The Great Dictator more than 65 years after its release, it’s easy to dismiss the turmoil in the world at that point. Particularly in Europe, the threat from Hitler was real. It’s hardly just a historical document, however. This line feels particularly apt given today’s divisive climate: “Let us fight for a world of reason, a world where science and progress will lead to all men's happiness.” This message still connects now, and Chaplin sells his conviction.

I’ve started on the final scene because I wasn’t that engaged by much of this film. When Chaplin directly satirizes Hitler with Hynkel (Dictator of Tomania), his ridiculous take is effective. It’s such an over-the-top character that he seems more convincing as a cruel dictator. He’s the kind of guy who declares war on anyone just to avoid boredom. There’s no logic to his madness, and he tries to wipe out entire groups because he can. Hynkel is clever satire, but there’s a lot of other material that feels like filler. The running time is more than two hours, and you definitely feel the length. It’s such a personal project for Chaplin, and I suspect he tried to make sure all his ideas made the final cut.

The opening scenes during World War I are well-done and satirize the weapons of war. Moments like a bomb following a soldier in a circle work because they’re so over the top. The barber (also played by Chaplin) is completely over his head in war and feels similar to his famous Little Tramp character. I should note that this is a full sound film, which can be jarring if you’re used to Chaplin’s silent work. It isn’t a huge adjustment after a short time, and there are some familiar gags. The scene with a group of men eating pudding is a highlight that would fit in his classic films. Each guy doesn’t want to find a coin in the pudding, which would set them up for a hero’s death. The look on Chaplin’s face when he bites into the coin is just perfect.

I hate to dismiss the middle section of the movie, which does include fun moments like the pudding sequence and a food fight with the Mussolini surrogate Napolini (Jack Oakie). Having already seen (and loved) City Lights, Modern Times, The Gold Rush, and others, it’s hard not to compare The Great Dictator to those films. It’s a daring project that deserves all the acclaim, and I’m glad to have finally caught up with it. I might prefer the others on the whole, but that’s more about personal preference. It was Chaplin’s most successful commercial film and is still watched regularly today. The mayhem and direct satire doesn’t feel dated, and that says a lot in 2016.