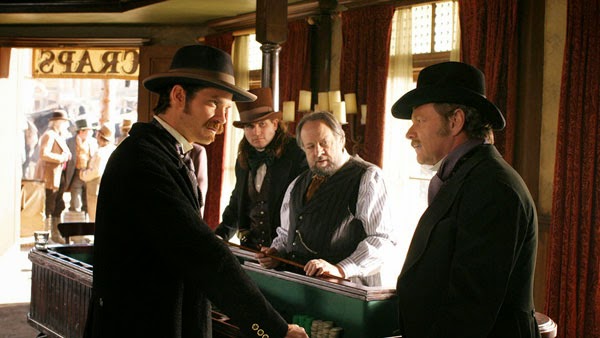 Delivering a satisfying finale is no easy feat, especially when you have as many story lines as Deadwood. The season has given considerable weight to all the different characters in town, and resolving their arcs would be difficult. What makes this episode succeed is not closing down every important plot strand. Instead, it gives the emotional payoff that the characters deserve, for better or for worse. I can’t think of a recent finale that’s thrilled me at every turn like this one. We see significant progress, but it never feels like the characters know they’re in the season finale. Also, there are no jarring cliffhangers that leave anyone’s fate hanging in the balance. That type of move can lead to great results, but it would have felt out of place on Deadwood. This episode could end the show and not leave the audience needing an explanation. Thankfully, two seasons remain with these incredible characters.

We begin with Swearengen standing on his porch and looking down at his changing town. His nemesis Magistrate Clagett returns to cause more problems, and a military regiment arrives to join the fun. Given the promise of annexation, this won’t be the last government party. The soldiers are led by General Crook (Peter Coyote), a grizzled veteran of the Civil War who leads “Custer’s Avengers” against the Native Americans. I’ve been trained to expect Crook to be corrupt, so it’s a surprise when he doesn’t fall prey to the temptations that lurk around every corner. Coyote brings a strong presence to a guy who can tell the difference between honorable and awful people. It’s refreshing to watch him see through Tolliver’s charms and recognize the evil beneath the surface. This reply to Tolliver’s attempt at bribery says it all:

The evidence keeps mounting about Tolliver seeking more than a profitable business; he wants to own this town. His transparent moves to take over Wu’s territory are risky for multiple reasons. Swearengen will only sit back so long before taking action to protect his power. Wu also won’t go down without a fight. With Joanie and Eddie working against him on the inside, Tolliver has no friends. His $50,000 offer to Crook is a desperate move to bypass the obstacles and take charge. He can’t fathom the idea that honor outweighs money, and they’re living in different universes. Tolliver has an imposing presence, but that bluster looks shallow when he’s dressed down by a more formidable leader like Crook.

The standout performance comes from Timothy Olyphant, who goes through every range of emotion. When Alma reveals the true nature of her treacherous father, Bullock proves his mettle and steps up to protect her. There’s no stronger act of love than the way he takes charge and lays down the law for Russell. But does he go too far? Bullock gives a vicious beating to a guy who has it coming and pushes all the wrong buttons. It’s hard to fault Bullock for losing his cool against such a slimy guy. When you consider his growing affection for Alma, the result feels right. His choice to stick Dorrity on Russell is a different act entirely, but even that is understandable in this place. When Bullock admits the immoral choice to Crook, the general's reaction is the opposite of his stance against Tolliver. A man who’s spent that much time in the military recognizes an honorable soul.

Bullock also delivers a quick end to the unfortunate tenure of Con Stapleton as the town sheriff. His ridiculous outfit identifies Stapleton as a phony, and siding with Tolliver means he’s no good. We’ve seen evidence that Bullock wants the sheriff’s job for several episodes, and there’s no one else for the position. I called it after the first episode, though it felt like Swearengen would be his enemy. Their final conversation reveals that perhaps the very different guys can work together. Bullock and Swearengen stand on the balcony while the town parties below them, and an understanding clearly exists. Al has a new right-hand man with Silas and has removed the magistrate, but he shouldn’t make an enemy of Bullock. He may be mild-mannered, but Bullock's treatment of Russell shows his ferocious bite.

The unfortunate slide of the Reverend Smith reaches its logical conclusion, though he receives a push from an unlikely source. Killing the dying man is the most humane act that Swearengen has made thus far. It’s been difficult (and tedious) to watch the guy suffer every week, but the Reverend's death reveals a lot about Swearengen. He will do almost anything to keep power, but that has nothing to do with this move. Doc is praying for God to take the Reverend, and it takes a sinner to make it happen. Brad Dourif’s remarkable work in this episode also deserves a mention. He brings such heart to a character that is trying to believe in something. I’ve never seen Dourif give such a three-dimensional performance.

Looking towards the second season, there is great potential to outshine this incredible first collection. We understand all the players and where they fit, so the stories can build on that foundation. Tolliver and Swearengen are heading for a fight, with Bullock somewhere between them. I don’t expect Eddie’s plan to rob his boss to work, but he’ll certainly try. There is real happiness for Bullock and Alma, but his wife and son are on the way. What will become of their relationship when his family returns? Annexation is on the horizon, and more people like the magistrate are certain to arrive. Can Deadwood function like a real town with laws and leaders running the show? Farnum may have the title of mayor, but he doesn’t inspire anyone. Regardless of where the stories go, I can’t wait to spend more time with these characters and meet new faces along the way.

It’s been great to tackle the challenge of writing about each Deadwood episode during the past 12 weeks. I’m going to spend time covering some other TV series, but I’ll return to South Dakota in October to chronicle my experiences with the second season. Could it actually improve on this one? Given the show’s legacy, I have a feeling that I’m in for some great times with the next slate of episodes.
TV Review