My daughter Elise is five years old, and she’s fallen for normal movies that kids love like Frozen and Despicable Me. Neither is her favorite, however. Her first choice is Mary Poppins, and the fandom is showing no signs of slowing down anytime soon. I’ve seen it many times without even trying, and it’s an entertaining movie. The 139-minute running time feels too long, and certain sequences lag on repeat viewings. Even so, my favorite shot doesn’t arrive until the final act. Last year’s Saving Mr. Banks made the case that what cracked the mystery for Walt Disney was discovering that Mary Poppins hadn’t come to save the children. That story line doesn’t take hold for much of the movie. It’s the final visit to the bank for Mr. Banks (David Tomlinson) that sells that point. His son incited a riot earlier by refusing to deposit his tuppence there, and it’s time for his dad to face the music. The once-proud employee knows he’s getting fired, and he mournfully walks to the bank. 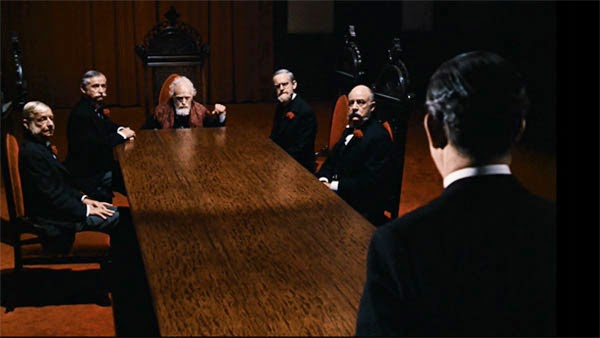 The pivotal shot happens when Banks enters the bank and sees his bosses waiting. It’s a gigantic room that dwarfs the little guy, who seems nonexistent. The set design feels more like Citizen Kane than a Disney musical. The stern bankers sit at the far end of the shot and also look tiny, yet they’re an imposing force at the end of his journey. The room is unnaturally large, and there’s little reason for them to meet in such a massive space. The red colors make the place Banks’ own version of hell, which he must endure to reach his salvation. This feels like the most depressing moment in the film, but it’s actually uplifting because it sets him up to succeed. Banks realizes that trying to please these petty guys is pointless. Mr. Dawes Senior (Dick Van Dyke under heavy makeup) is a relic of a different time, and his compassion is gone. When he finally enjoys a joke, it’s too much for his body to bear. The death is a strange moment yet corresponds to Banks’ own resurrection. 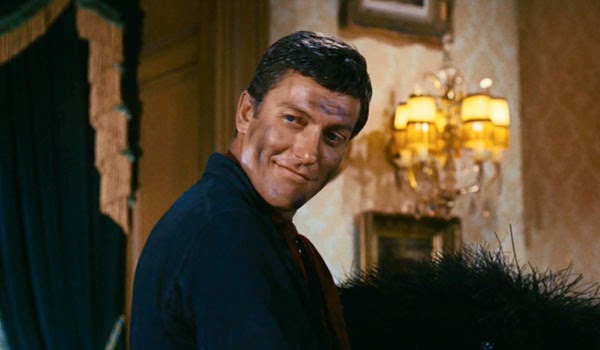 The build-up to this pivotal moment does a great job in setting the stage for this scene. Bert (Van Dyke again) gives Banks a subtle push towards realizing he’s a bad father. His song appears to encourage the guy about his current road, but it really helps to reveal his shortcomings. A man who sang earlier that “tradition, discipline, and rules must be the tools” starts to realize it’s a sham. If he doesn’t let it go and enjoy life, he’ll waste the precious time with the kids. He’s been doing the wrong things in hopes of running a proper household, but it means little without enjoying it. Bert knows exactly what he’s doing and is finishing the touchdown drive that Mary Poppins (Julie Andrews) initiated. Fitting lines about the children like "And all too soon they've up and grown and then they've flown, and it's too late for you to give" are phrased just the right way to push him forward. Despite their efforts, Banks needs to be the one who takes the last steps towards a different life. 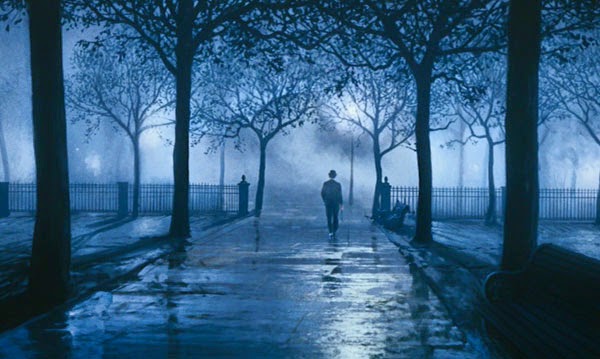 One masterful use of the longer running time is not cutting from the house to the arrival at the bank. Instead, we join Banks while he walks to his execution. It’s a mournful scene, yet there’s hope that the guy who rarely listens finally understands his predicament at home. Banks needs the walls of his perfectly constructed façade to crash down around him. I love Peter Ellenshaw’s gorgeous matte paintings of London, which create the perfect backdrop for the story. They sell the fantasy yet maintain a connection with reality like the overall film. The shots from the rooftops during “Chim Chim Cher-ee” give the city such an elegant and romantic feeling. This atmosphere helps to lift the movie beyond similar Disney films of the time period. The music wouldn’t work as well in a more generic setting. 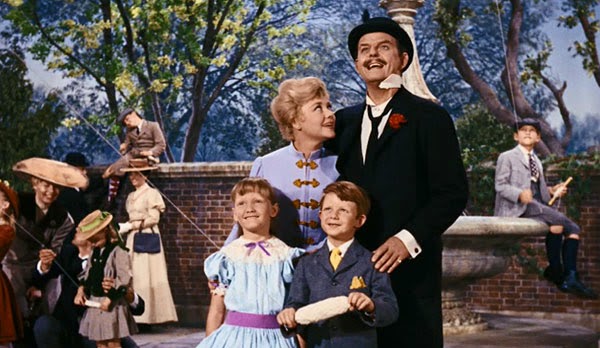 It’s been surprising to catch up with Mary Poppins as an adult and recognize parts that I missed as a kid. The animated sequences with the talking penguins and horse race are fun, yet it’s the emotional through line that pulls me today. When an excited Banks dances around the house and sings “Let’s Go Fly a Kite”, it’s an earned happy ending. I can’t help but smile, and the reason is that we’ve experienced his transformation. Mary Poppins gives the kids fun memories, but her presence truly saves Mr. Banks. David Tomlinson can play the goofball, especially in a movie like The Love Bug. His considerable stage work also helps him to sell the emotions. The story takes some extended detours, but it succeeds because it mixes fun and poignant moments. That combination is hard to pull off in a family film, but my favorite sequence hits all the right notes and delivers a remarkable film.
Disney Film Review