Disney in the 1940s: Der Fuhrer's Face/Reason and Emotion 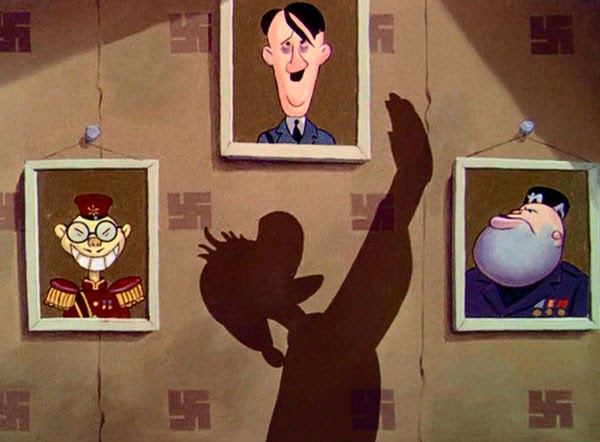 I recently finished Mark Harris’ intriguing book Five Came Back, which documents five directors’ experiences supporting the military during World War II. Some were directly involved in propaganda films, which others were focused on depicting what it felt like on the front lines. It seems crazy to think of modern filmmakers risking their lives and postponing their careers for a war. It was a much different time in the 1940s. The stakes were so high, and the battle to control the message was pivotal. That fight still happens today in the TV and online media landscape. Harris didn’t choose Walt Disney as a subject for his book, but he also played an important part in selling the war.

The On the Front Lines DVD release from the Walt Disney Treasures collection offers a wide range of remarkable material from that effort. Some were pretty hard to locate before this 2004 release, and they give a stunning look at effective propaganda. Two years ago, I discussed Education for Death in a guest post for Forgotten Films’ series on forgotten Disney movies. It’s a brutal look at the ways Hitler is leading the German people to their deaths. In this post, I’m focusing on two of the most interesting shorts — Der Fuhrer’s Face and Reason and Emotion. Both aim to deliver a similar message and paint the Nazis as cruel automatons who’ve forgotten the traits that make them human. 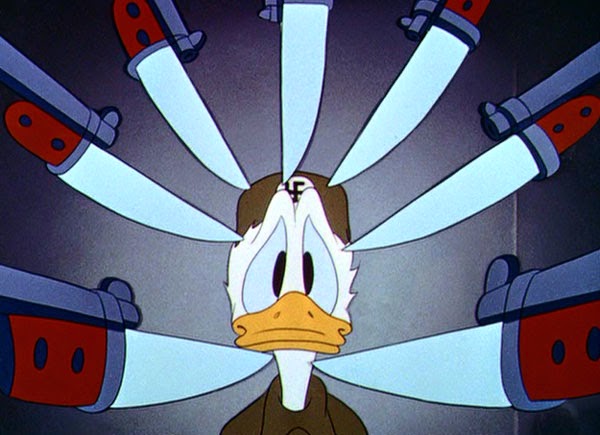 One brilliant way that Disney made their points about the war was using familiar characters the audience loved. Donald Duck first appeared in 1934’s The Wise Little Hen and had already become a favorite by the start of the war. He starred in many short films to help this country sell the conflict and demonize Germany. The most famous example is Der Fuhrer’s Face, which depicts a terrible scenario of being a Nazi solider. Donald must constantly salute pictures of Hitler and work feverishly to help their cause. The ridiculous opening of Nazis marching to the Oliver Wallace title song sets the comic mood. They’re presented as large and misshapen guys with no warm characteristics to connect with the audience. Even the chickens must salute constantly, and there’s no fun in this single-minded totalitarian state. 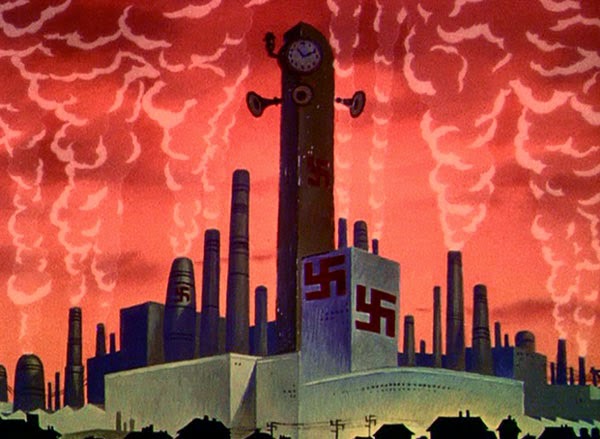 Donald works at a factory that resembles hell with monstrous-looking machines controlling the action. Directions come from off-screen soldiers represented by knives to remove their personality. He battles an assembly line of bullets that keeps increasing his speed; it’s essentially the famous I Love Lucy chocolate episode. Donald’s vacation is looking at a photo of the Alps for a moment, and he’s immediately thrust back to work. The life of a Nazi solider shown here is pure hell and leads to madness. Donald enters a surreal nightmare with bullets and other objects saluting Hitler. There are plenty of laughs, yet they come from painting the enemy as a caricature. It’s a brilliant way to make them look utterly ridiculous.

It’s still amazing to consider the Donald we have today playing a Nazi, even in a propaganda film. The final scene reveals everything as a terrible nightmare, but the images remain. Donald wakes up in an American flag outfit and hugs the Statue of Liberty; could the point be any clearer? If that wasn’t enough, his last line is “Am I glad to be a citizen of the United States of America!” This ending nails home the contrast between our freedom and the German war machine. It blatantly makes the case yet disguises it behind a comic tale of Donald in a strange land. It's no surprise that it took home the Oscar. 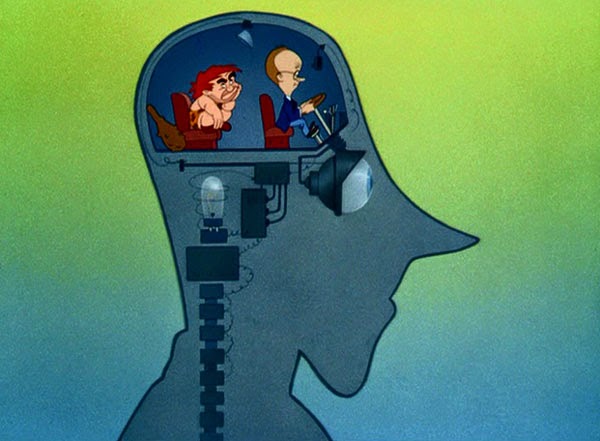 Another route to win the information fight was educating the public on how to react to bad news. Reason and Emotion takes a roundabout path to nail home the point that fear is our enemy. We may hear about losses, but we shouldn’t worry about the “Nazi superman”. That message comes at the end after a presentation on the conflict between the two sides of our brain. We begin inside a baby’s mind, where emotion pushes reason aside. The caveman inside each of us is dominant in the undeveloped brain. When we get older, our rational thoughts gain control. They’re represented by a well-dressed guy driving our mental processes. Of course, all it takes is an attractive woman to change the dominating force. The caveman is ready to act and go back to the simple emotions of a baby. 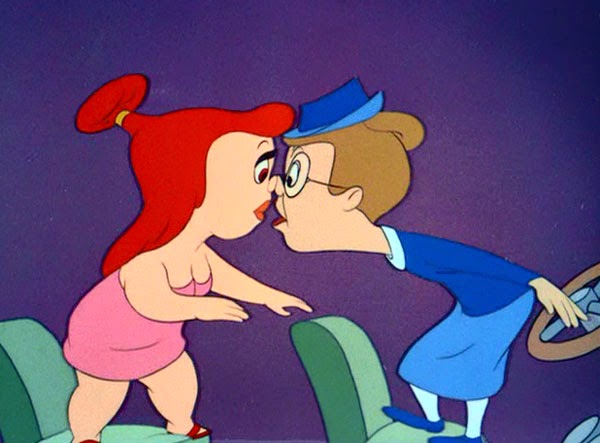 It’s a simple point that might be convincing if it wasn’t for the blatant sexism. The guy is shown as having a one-track mind obsessed with sex, and it gets even worse when we enter the woman’s mind. Her emotional side wants to eat a giant sandwich and chase down the guy. The rational part explains her case by stressing the importance for women to not get fat. We’re veering pretty far away from the main points. I realize it was a different era, but it’s still jarring to watch such an unfortunate look at gender dynamics. It’s played for comedy yet sticks with young longer than the war propaganda. The key theme is less impactful at the end despite the triumphant imagery about a future victory. It’s an intriguing look at a different way to present the message, despite the murky road to get there.

Interested in Disney? Check out my page for my writing about their movies and rides.
Disney Film Review