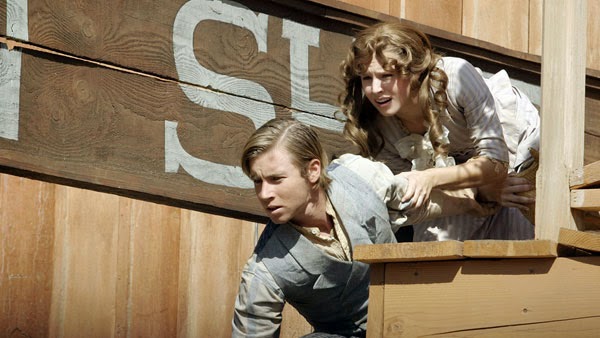 Cy Tolliver’s bad side is not a good place to be. We’ve seen hints in past weeks of his brutal tendencies with threats against Joanie Stubbs and corrupt practices at Bella Union. That was just the set-up for what transpires with Myles and Flora. The young hustlers don’t recognize who they’re dealing with and go for the quick score. This isn’t Tolliver’s first rodeo, and he recognizes a shady character who’s hiding secrets. Once she stabbed him and made a break for it, Flora sealed their fate towards a violent end. The sadistic gleam in his eyes tells us everything about Tolliver. He claims not to enjoy meting out punishment, but that’s hardly true. His face occupies the entire screen and paints a grim picture of a world gone mad. Swearengen may inflict violence when necessary, but this is a different kind of evil. Tolliver hasn’t gotten to his current spot by letting anyone take advantage of him.

This episode provides insight on Stubbs’ mindset and her relationship with Tolliver. He has a strange affection for her, yet they aren’t on equal footing. She can’t stand this sour life, but escaping from his iron grip isn’t so easy. Flora can steal from her and throw insults to her face, but Stubbs does little. Tolliver may force her to pull the trigger, but that doesn’t mean anything has changed. Their final conversation reveals both her desperation in this spot and willingness to die to escape it. I expect he’d look upon that result as a victory for her, and that isn’t going to happen. Plus, he seems to need her. Despite his threats and anger towards Stubbs, she represents part of Tolliver’s life that he wants to retain.

The other major story line involves Alma preparing to leave for New York City with the girl and sell the claim. Bullock isn’t ready to see that happen, and I’m starting to wonder if his interests aren’t entirely professional. Alma hints at similar feelings in their conversation about his discovery of gold in the wilderness. Bullock has a wife still living in another state, but he’s been away for a long time. What’s surprising is the way that Swearengen decides to use Bullock as his front man. Farnum wants him dead so he can gain financially from the claim, but that’s short-term thinking. Keeping the honorable guy around meets Swearengen’s interests, though I don’t completely understand why that’s true. His conversation with Bullock is odd because they’re both talking around the issue. They’re feeling each other out and can’t seem to pinpoint how to react to the other.

Paula Malcolmson continues to shine as Trixie and gets plenty to do this week. Alma and Doc Cochran (Brad Dourif) are doing everything they can to keep her from returning to the Gem, but she doesn’t believe in the escape route. After trying to commit suicide and nearly succeeding, Trixie doesn’t feel recharged by the second chance and decides it’s better to maintain her spot. It’s tragic to see that choice, but it makes sense given her character and the Deadwood environment. She returns to the devil she knows and takes the road with less chance for disappointment. Her moment with Sofia when the girl finally reveals her name is heart-warming but also sad because they have a true connection. The girl likes Alma but looks at Trixie like a mom. It’s too bad their relationship won’t keep moving forward.

This episode brings the apparent end of the plague, which left a few bodies yet failed to decimate the town. Tolliver’s wary look at Andy makes me wonder if they’ll have a renewed conflict in the future. There’s also news of a deal with the Sioux, which could set the stage for statehood. That’s bad news for Swearengen, who wants as little justice as possible. This could also explain his interest in keeping Bullock in place for his gold claim. There are fewer questions with a guy like that running the show. I don’t expect their current peace to last very long, though. They remain at the opposite ends of the ideological spectrum, though neither sits on Tolliver’s level. His enjoyment of the nasty side of their business makes him a threat to everyone in town. I expect more fireworks are coming.
TV Review