Deadwood Watch, Episode 1.11: "Jewel's Boot is Made for Walking" 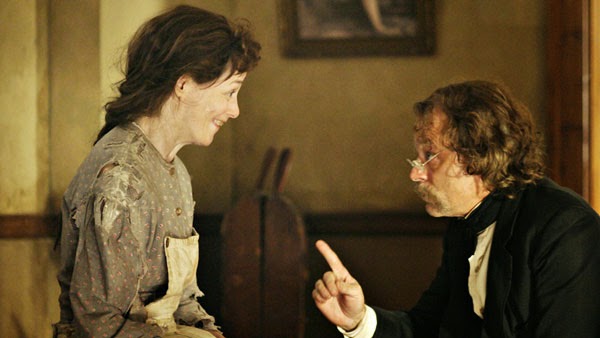 Prestige dramas frequently use the penultimate episode to reveal the showstopper moments and then clean up the mess in the finale. The Wire has turned this method into a formula, and Game of Thrones has employed a similar structure. Will Deadwood follow the same path? The main difference is the lack of a central arc. The gold claim has played a major role, but it’s one of many stories that continue to develop. This episode keeps the momentum going yet feels more organic. We aren’t living in the world of The Walking Dead where little happens until the end. Characters keep evolving in a way that doesn’t feel jarring or out of place. A prime example is Bullock, who’s seen enough bad things to want the sheriff’s job. He won’t admit this fact to himself, though. Swearengen sees it and isn’t just being sarcastic when he raves about Bullock’s skills. There’s a growing respect between the pair despite their different world views. Another reason is the complete idiot who’s grabbed the role. Con Stapleton (Peter Jason) has no business being anywhere near an official position.

“Jewel’s Boot is Made for Walking”
Season 1, Episode 11
Directed by Steve Shill
Written by Ricky Jay

The episode title concerns Jewel’s request to have Doc Cochran build a boot to help her walk better. Geri Jewell doesn’t get much screen time, but she deserves credit for making Jewell an engaging character. She was the first actor with cerebral palsy to have a major role on TV and brings such heart to Jewell. Cochran’s hesitance to create a possibly harmful device makes sense and puts him in an extremely difficult situation. I’ve never seen Brad Dourif play such a three-dimensional character, and he’s one of Deadwood’s unsung heroes. The scenes with Cochran and Jewell work because they are so different than the typical happenings. He’s really trying to do the right thing with her, even if it means not making the boot. The goal is maintaining a rational approach to what could be a huge benefit.

Ricky Jay wrote the script for this episode, which is pretty rare for the actor/magician. This involvement makes sense given his role as Eddie Sawyer. The show closes with an epic monologue from Swearengen, who looks broken while recounting his awful childhood. His new companion doesn’t know what to make of these revelations, and it’s clear that he’s exorcising his demons. The girl means nothing and isn’t the real audience for these comments. It’s a disheartening way to end the episode and reminds us that Swearengen’s imposing presence masks serious doubts beneath the surface. He’s been hardened by his environments and has discovered the only way to thrive in a brutal world. McShane nails the monologue and reveals both the hurt and the nastiness within his character’s soul.

Part of Swearengen’s anger comes from Trixie’s free tryst with Sol Star, and her time with him is much different than her frequent rendezvous with the boss. There’s a great comic moment with Bullock catching them in the act at the hardware store. Unfortunately, he inadvertently reveals this discovery to Swearengen and sets up the whole situation. This is hardly the first crack in the Trixie/Swearengen relationship, though. It’s just a symptom of a larger problem, and Star is on the opposite of the end of the spectrum because of his sweet behavior. Bullock’s mind is on losing the sheriff’s position to Stapleton, who gets the job despite Swearengen’s objections. I expect it’s only a matter of time before that title changes hands. This guy is possible the worst candidate for sheriff in the entire town.

I’ve yet to even mention the most prominent new arrival in town – Alma’s father Otis Russell (William Russ). It’s clear that he’s up to no good despite the kind words that come out of his mouth. He’s traveled there to check on the gold claim and ensure that he gets a piece of the action. Alma does her best to keep up the charade that she isn’t concerned about her dad’s true intentions. This isn’t her first rodeo with his deceptive plans. Bullock joins them for dinner, and he recognizes the danger with this clever guy. This meal represents another step in the growing connection between Alma and Bullock. Russell sees their bond and tries to use it to his advantage, but his marks want no part of him. They’re tolerating his insinuations because he’s Alma’s dad, but the calm should only last for so long. This is one of so many interesting story lines that should deliver an incredible finale. Light up the fireworks!
TV Review