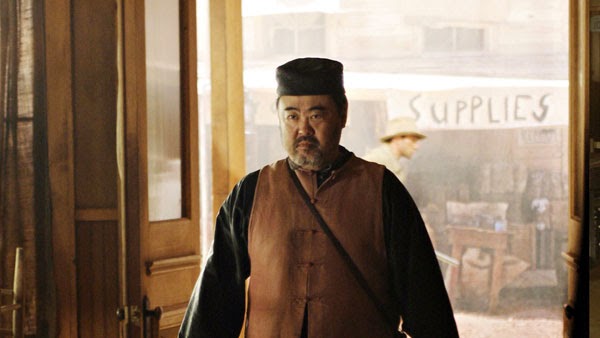 The racism of 1870s America rarely gets a mention in the nearly all-white Deadwood beyond a few cracks about Mr. Wu (Keone Young). He takes center stage this week and forces people to let their feelings about the Chinese residents be known. Some are not kind, especially Tolliver. When an angry Wu steps through the front door and into the Gem, the guys inside regard him like an alien. Barking out “Swearegen!” repeatedly, he’s going to be heard regardless of what they think. The impetus for the visit is the killing and robbery of one of his men, who delivers drugs to Swearengen. Someone must answer for the crime, and the culprit should face the pigs. The conversation between Wu and Swearengen provides great comedy since they share few words ("cocksucker!"). Despite the stakes in play, it’s an amusing look at an outsider who demands respect despite the societal forces against him.

Despite everyone’s claims that the government posts mean nothing, it’s not a surprise to see people taking on their roles. Bullock can’t help but get interested in public health; he’s that kind of guy. Farnum walks around like the king of the town as the mayor. William Sanderson is such a perfect comic sidekick to Swearengen. The boss’ clear direction to “steal none of this money” is priceless. On a related note, Deadwood seems a lot more crowded since the deal with the Sioux happened. Is this town big enough for all these folks? The masses of people in the breakfast area at the hotel are out of control. This influx should be great for local businesses, but it’s sure to lead to new challenges down the road. It’s harder to keep a grip on power when the population keeps growing all around you.

Titus Welliver has such a powerful screen presence, even when he’s playing quiet guys like Silas Adams. It’s hard to make this cast any better, yet he still brings such an interesting vibe to the mix. Welliver and Ian McShane play off each other so well and could form a strong partnership. Swearengen recognizes a kindred spirit and lets Adams join him while he resolves the Wu situation. He needs a right-hand man with more smarts than Dority, who’s effective as a straight-up killer. Adams works for the corrupt magistrate who’s bribing Swearengen, so there’s a risk in trusting him. He’s finding Tolliver more frustrating with each passing day. His limited thinking and inability to recognize the importance of allies creates problems. He’s also looking to grab power for himself and doesn’t want to share with Swearengen. This experience has revealed Tolliver’s real plans to take out his biggest rival.

If there is a tipping point in my thoughts about the Reverend, it happens this week. He’s the show’s least interesting character and gets way too much screen time. The one benefit is getting to see a new side of Swearengen, who’s uncomfortable with the guy in the Gem. I’m guessing there will be an interesting end for the Reverend, but we’re seeing the same things too often. I’ve also been a little disappointed in Ricky Jay as Eddie Sawyer. His plans to steal from Tolliver seem unwise, especially given their boss’ vindictive nature. Helping Joanie Stubbs escape is a nice gesture, but Sawyer better understand the risks. Tolliver enjoys inflicting pain, and their history won’t mean a thing.

In a different realm is Swearengen, who rigs the game to take out his own man. He’s concerned with maintaining power, and few benefit from a war with Tolliver. Adams wisely points out the possibility that the Bella Union leader is goading Swearengen into a fight. Jimmy Irons has no chance to come out of the bathhouse alive. This leaves the weasel Leon (Larry Cedar) alive and ready to do anything for Tolliver. Watching Swearengen drown a man with little remorse is chilling but not as shocking given his dilemma. This murder shows Adams his willingness to make the tough choice. It takes a guy who’s willing to do the dirty work to keep his power. It's interesting to connect this killing with Tolliver's murder of Flora and Myles. Despite the fact that Swearengen is taking out his own guy, it feels less sadistic. He needs a body to preserve his relationship with Wu, and Tolliver has him trapped. Their day of reckoning will come, but this move postpones it for a while.
TV Review