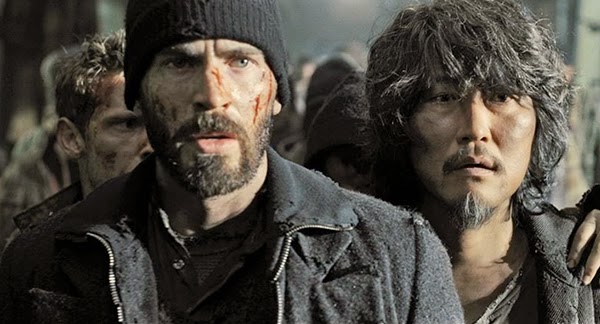 This summer has been dominated by the familiar band of super heroes, giant robots, and other franchise characters. It’s been rare to see an original story that packs a punch yet enters new territory. A talented South Korean filmmaker has arrived to shake up the formula and deliver one of the year’s most unpredictable gems. Bong Joon-ho is building quite a fan base around the world after the success of The Host and Mother, and his latest outing should continue that trend. Snowpiercer is an epic tale that provides the thrills and surprises of a summer movie. The budget is just shy of $40 million, but it feels more expansive than films that cost four times as much. The trick is getting us engaged in a story that could go anywhere. It occurs in the confined space of a moving train, yet there’s a sense that anything may exist behind each gate. Despite Harvey Weinstein’s best efforts, it's catching on through word of mouth and deserves a larger audience.

Comparing movies to video games is an overused trope, but it actually fits in this case. The revolutionary forces led by Curtis (Chris Evans) are progressing through each level, fighting enemies, and solving problems to reach their ultimate goal. There are even boss fights that raise the stakes and offer new challenges with greater difficulty. Like the skyscrapers in The Raid or Dredd, the train offers the perfect setting for this type of incremental progress. Each gate moves them closer to the final stage, but the dangers increase and require added skills. Curtis is supported by a group of adventurers with their own abilities. Namgoong Minsoo (Kang-ho Song) knows the electronics for opening the gates, Yona (Ah-sung Ko) can see what’s coming, and Grey (Luke Pasquilano) is a skilled hand-to-hand fighter. They’re a formidable team with a chance at escaping their awful situation, but it won’t be easy. 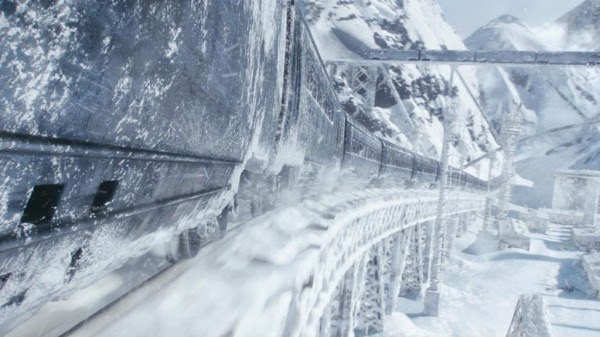 What makes Snowpiercer more than just another cool action film is the creativity in the set design and this entire universe. It could easily become a one-note story with a great concept but limited execution. The remarkable part is the way that the inventive environment sets the stage for a gripping film. Joon-ho supersedes the genre trappings and delivers thrills while digging into compelling sci-fi themes. In a frozen world of limited resources and space, how do you avoid pure chaos? Wilford (Ed Harris) has developed an extreme class structure to maintain the “balance”, and it feels like an immoral construction of a deranged man. But what’s the alternative? Would the rich folks of the first-class cabin give up their posh life and share their wealth with the lower classes? That’s a tricky question, especially when the system’s been in place for nearly decades. Usurping this structure will most likely deliver rampant destruction.

It’s easy to understand why Curtis will lead the revolution. The tail section has miserable conditions with bodies living on top of each other. They’re fed with bars of a jello-like substance and have no freedom to move around. Kids are taken from their parents with no explanation, and it’s essentially a totalitarian state. What’s surprising is the way Curtis’ status as the hero slowly drifts away. We’re still on his side and want to reach the end, but there’s little sense he’ll save the universe. The upper-class folks view him as a non-person and barely acknowledge his existence. Limited resources only allow for so many to thrive while others suffer. It’s essentially a simplified look at a capitalist society. Wilford may claim benevolence and intent to preserve the balance, yet there’s a joy in being a savior. The privileged few like Tilda Swinton’s Mason revere him and look down upon anyone that says differently. Who wouldn’t love a guy that’s created such an isolated paradise? The screenplay delves into complex themes, but it's also rousing entertainment. The hatchet battle is possibly the most thrilling sequence that I’ve witnessed this year. Although it’s bloody and action-packed, there are small touches that separate it from the typical fare. In the middle of the fight, everyone stops for a brief New Year’s celebration. That brilliant segment is matched by a comic sequence involving a classroom of students, a history video, anthems praising Wilford, and machine guns. It’s ridiculous and represents a drastic shift in tone yet still feels right in this world. It takes major skills to get away with this move and keep the audience right with the story. I wasn’t budging for a second.

If there’s an emotional center to Snowpiercer, it’s Chris Evans’ steady presence. Curtis is struggling with past demons, and the revelations about his past are startling. Evans sells the tragedy without over playing the melodrama. He’s so committed to stopping Wilford that betrayal from an ally never crosses his mind. Swinton and Harris get more leeway to chew scenery and inject the right energy into their supporting roles. Wilford doesn’t even arrive until the finale, yet people talk about him for the entire film. It takes an actor with a huge presence to live up to those expectations. He’s hardly a standard movie villain, either. Despite the rampant collateral damage with Wilford’s approach, there’s a method to his madness. He’s become a clinical leader that pushes morality aside for the good of chosen few. It’s hardly a great scenario, but there are very limited alternatives. This unforgiving environment sets the stage for one of the year’s most thrilling films.
2014 Film Review