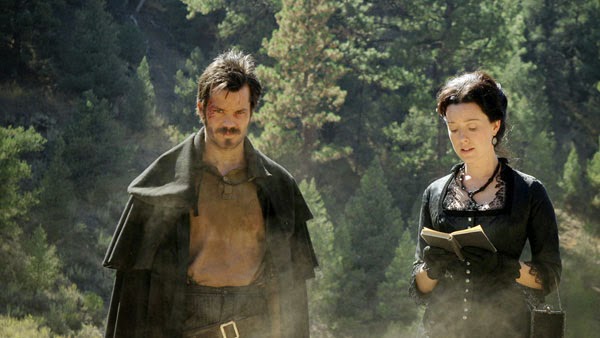 The first season of Deadwood has shown the dangers of messing with a guy like Al Swearengen. Dim-witted fools have fallen to his wrath, and only Cy Tolliver is a worthy match. That greedy guy is on a similar level to Swearengen and will do anything to keep his livelihood. They’re similar in that regard. Sitting in the opposite camp is Seth Bullock, who’s grown into a fearless adversary. His conversation with Swearengen in this episode sets the stage for a rivalry that should carry through the remainder of the season. After barely surviving a brutal attack, Bullock is changed and isn’t afraid to stand up to the bully. Threats of physical harm don’t intimidate him, and it’s clear there will be a future reckoning. Bullock is the only true opponent for Swearengen because his worldview is so different. It isn’t hard to understand what motivates a guy like Tolliver. A man who can’t be bought and honors his promises is a much different player to face. It will be interesting to see if Bullock has what it takes to stand up to Swearengen without destroying himself in the process.

The episode begins with Bullock and Charlie Utter (Dayton Callie) catching up with Jack McCall. It isn’t your typical Western showdown and feels anti-climactic but fits with his personality. This isn’t a brilliant gunfighter who refuses to go down without a fight. McCall is a dummy who got lucky when Hickok let go of his fears. I expect this may be the last we see of him if his story sticks with the history books. The sad part is that Garret Dillahunt won’t be part of the show. Bullock’s choice not to get revenge fits his new approach. Once you’ve bashed a man’s face in with a rock, it’s hard to think the same way about inflicting violence. Sticking with the very obvious title, it’s time to go back to camp. With the plague in full force at Deadwood, I’m not sure Bullock should hurry back to the chaos.

The new arrivals at camp are Miles and Flora, a brother and sister looking for their lost father. They seem naïve and easily corruptible, but all is not as it seems. I’ll admit to being fooled and worrying about their safety, especially for a girl like Flora. She’s played by Kristen Bell right before her starring role in Veronica Mars later in 2004. They seem overly innocent, but it’s all a ruse to fool the wealthy people in town. Flora makes a connection with Joanie Stubbs, which could represent serious danger for Bella Union. Miles (Greg Cipes) starts working for Swearengen as both try to determine the best score. It’s another reminder that trusting anyone in this lawless camp is rarely wise. Flora may look like an easy convert to the brothel, but she may have some serious tricks up her sleeve.

Deadwood has a new funeral every week, and it’s time to bury Brom Garret. Reverend Smith gets plenty of chances to stay busy, but he may need to slow down his preaching. His third seizure causes the doctor to speculate that he has a lesion in the brain, and that’s not good. The funeral also includes the ridiculous moment of Farnum offering bids on Alma’s gold claim while her husband is being buried. Despite trying to be sly and play every angle, Farnum can’t help but step into the wrong situations. William Sanderson is so much fun as he tries desperately to do something right in such a messy environment. When Swearengen finally sees through Alma’s deception and realizes she’s clean, Farnum is to blame. This does end the collaboration between Alma and Trixie, who can’t escape from Swearengen entirely. She avoids serious punishment for her transgressions with some quick thinking. Even so, she recognizes that there are few other options beyond staying with her powerful employer.

This episode gives the supporting players extra chances to shine, particularly Robin Weigert as Calamity Jane and Dayton Callie as Utter. Their heartfelt scene talking at Hickok’s grave shows how both will never be the same without their close friend. W. Earl Brown also gets to show another side of Dan Dority when he falls hard for Flora. He’s determined to protect her from the leering drunks even if it means killing them in front of everyone. How will he take her deception? Given the body count that he’s left in the first seven episodes, it isn’t going to be pretty. It’s also surprising to note that Andy Cramed survived the plague that he brought to Deadwood. Tolliver just can’t catch a break, and it couldn’t happen to a worse guy. I expect that his days are numbered given all the forces that are rising against him. Someone dies every week on Deadwood; will he be the next victim?
TV Review