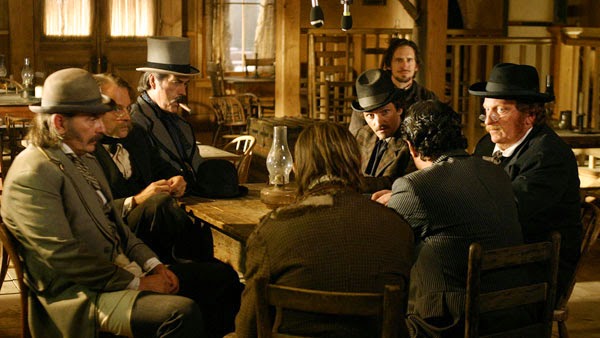 When you begin an episode called “Plague”, you know this isn’t going to be a carefree picnic. On a show like Deadwood, there are no easy days. When several other bodies fall, the risk of a massive infection keeps growing. Joey’s attempt to get the antidote in Nebraska has failed, and now he’s ill. In the days before the widespread smallpox vaccine, the risks of an outbreak were high. When you consider the brothels and gambling establishments in Deadwood, there’s a huge cause for alarm. It’s interesting that Swearengen and Tolliver are working together again, and the intimidating guys have a begrudging respect for the other. Even so, there will be a reckoning between them at some point. We learn plenty about the way that Tolliver runs his business in this episode, and he’s no better than Swearengen. He may be worse, which says quite a lot given all the nastiness that’s happened thus far.

When Tolliver and his Bella Union group arrived, they seemed like the more refined alternative to Swearengen’s rough-and-tumble business. This week, we learn why Tolliver is so intent on making craps a key part of his services. He cheats! Joanie Stubbs (Kim Dickens) looks for marks to set up, and the dice are hardly on the level. They’re running small-time hustles within their own establishment, which is pretty brilliant when you add alcohol and men of limited intelligence to the mix. We also understand more about the relationship between Stubbs and Tolliver. When she blinks and lets Ellsworth (Jim Beaver) slide without losing even more money, Tolliver’s anger offers hints of menace behind his smooth veneer. I get the sense that she’s faced his wrath in the past, and there’s nothing pleasant about it. There’s also a question of how much Eddy Sawyer (Ricky Jay) knows about Tolliver’s bad side. He’s part of their chicanery yet seems more innocent about the tricks behind the scenes.

The episode begins with Bullock riding after McCall but not getting far. After his horse is shot down by a Native American warrior, he barely escapes with his life. So many emotions flowed through my mind while watching this scene. There’s concern for Bullock and some humor from the over-the-top enemy. When he gets the upper hand and smashes the guy’s head to pieces, the worry shifts to wondering if Bullock crossed the line. After Charlie Utter (Dayton Callie) arrives and points out the markings of past kills, there’s a recognition that Bullock’s moves were justified (no pun intended). Despite the violent attack, their attempts to give him the proper ritual show the differences with Bullock. He doesn’t throw his fallen enemies to the pigs. This honor places him in a different world from Swearengen and many others in Deadwood. This moral conflict will certainly return in the future.

I’ve covered the limited portrayals of women in a previous post, and that’s remained a concern despite having a few great characters. This week, the trio of Trixie, Alma, and Calamity Jane give hope that they’ll play a more significant role going forward. The way they work together and deceive Farnum is clever and succeeds because they’re looked down upon as women. Paula Malcolmson is adding layers to Trixie each week, and her meek attitude towards Swearengen is quite a ruse. He’s able to see through men who try to fool him, but the powerful guy has no idea that the lies are happening. Trixie sticks her neck out to help Alma get over the drugs because she’s been there in the past. They have a bond on that front and connect with Jane over her interest in caring for the young girl. I hope we see more of these three very different women collaborating in the future.

Ray McKinnon’s over-the-top performance as the Reverend H.W. Smith is sometimes a bit much, but there’s a real intrigue with his character’s seizures. I was under the impression that epilepsy was a long-term condition for him, but Smith’s attack this week was only the second one. What is causing them in Deadwood? I hate to expect too much from this subplot, but it brings another layer to a character that could easily become a caricature in lesser hands. He’s so determined to connect with God and feel the spirit that he must be over compensating for past trauma during the war. His story is one of many that continue to expand as we head into the second half of the season. Great things are going to happen.
TV Review