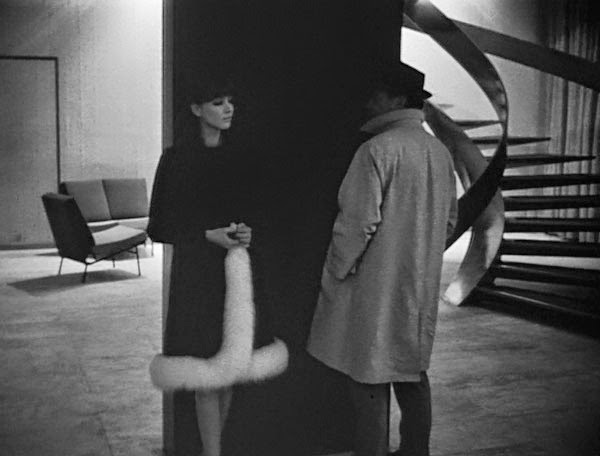 “Something’s not in orbit in the capital of this Galaxy.” – Lemmy Caution

There’s something easily complementary about the sci-fi and noir genres. The stylized dialogue and outfits can fit with the differences in a future civilization. We frequently see corrupt systems in sci-fi, and that allows the detective (or a similar character) to search for clues and uncover the mysteries. The noir world also helps to keep budgets down since it’s dark and confined, even when the ideas are fantastical. A film like Dark City does an excellent job molding those genres into something greater than either formula. Jean-Luc Godard put his own stamp on this hybrid with 1965’s Alphaville, which sends a loner into a restrictive and uncaring environment. Inexplicable events happen to Lemmy Caution (Eddie Constantine) right from the start, but he’s hardly a passive individual. His plans include bringing down the Alpha 60 system that runs everything, but it won’t be easy.

Shot entirely in Paris, Alphaville presents a futuristic land that looks a lot like ‘60s France. Godard spotlights the modernist architecture that was novel at the time and creates an interesting look. Many scenes take place in dank apartments and minimalist hotels, but the spare décor works. Godard excels when he’s playing around, and there’s a sense that the entire movie is kind of a lark. The score constantly adds a “duh duh duh” cue to moments that don’t seem to deserve it. It’s like we’re experiencing the resolution of a Perry Mason case every five minutes. Godard also employs jump cuts backed by gun shots and seems to enjoy keeping us confused. There’s a voice of a man with serious throat problems that serves as the narrator and also interacts with Lemmy. We eventually discover the voice’s identity, but it’s hard to take it too seriously with such a distinctive vocal delivery. 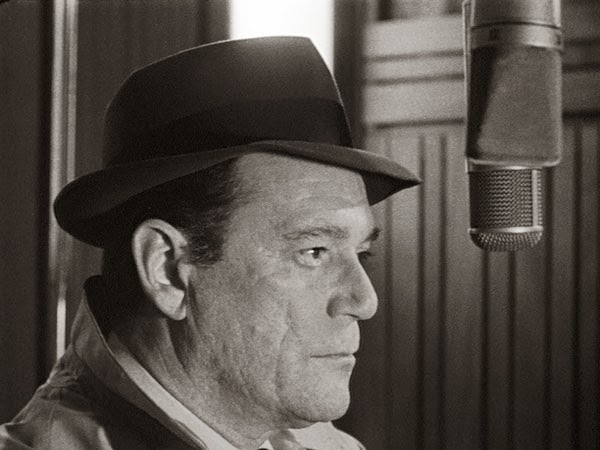 The opening scene sets the stage for Lemmy’s experiences throughout the movie. He arrives at a hotel and is escorted to his room by an attractive woman. She propositions him for sex, and then a random guy tries to kill him. Lemmy deals with both situations, but then he acts like nothing has happened. Later, he’s attacked by another guy and takes him out in a phone booth. It’s hard not to laugh when watching these moments, and one reason is how serious Eddie Constantine remains throughout the scene. He never lets on that he’s in on the joke, if there is one. It’s interesting to note that Constantine played Lemmy Caution many times in more straightforward detective stories. This character would be very familiar to French audiences, though I expect this version was pretty different.

Lemmy’s love interest is played by Godard’s muse Anna Karina, though she’s more subdued than usual. Natacha von Braun doesn’t understand love because it's been lost from this environment, and she isn’t sure what to make of this outsider. The camera frequently shoots Karina in close-up and explores what makes Natacha tick. I kept expecting her to end up being a clone since she’s so devoid of emotion. She’s the key factor in destroying Alpha 60, and it’s the lessening of her walls that makes the difference. Karina is gorgeous and mysterious, but she’s mostly secondary to the lead gumshoe. Even so, she’s the only woman in the story with any substance. The powers treat women like objects, and everyone but Natacha appears to be a prostitute or something similar. It’s a bleak look at a possible route for our society, which still has issues with male domination. 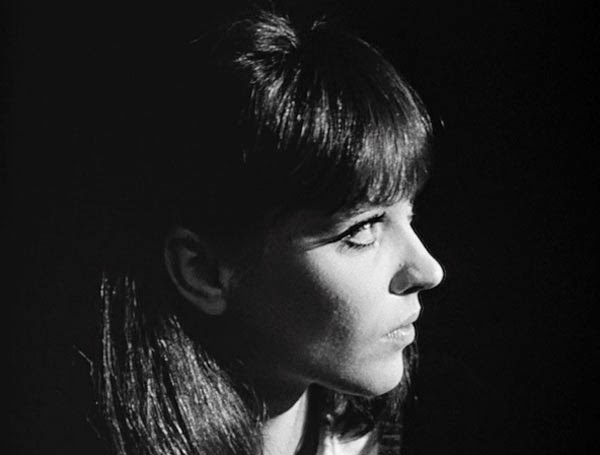 The challenge with Alphaville is staying on board with the low-key atmosphere. It’s an interesting take on the sci-fi and noir genres, and the gravelly voice makes the antagonist more than your typical electronic villain. The saving grace is memorable scenes that occur apart from the main story. Lemmy takes a ridiculous elevator ride where hoods knock him from side to side of the frame. We only see him moving back and forth like a tennis ball, and it’s a clever device. Another highlight is the execution chamber, which includes a swimming pool. Subversive guys are brought to the deck, given a moment to speak, and killed with a shotgun. Young women then swim to the victim and take care of the body. The callous look at murder is chilling, but Godard undercuts it with by using such an odd sequence. It’s this offbeat approach that keeps Alphaville afloat when the story drifts into long conversations between man and machine. It’s a slow grind and doesn’t rank among my Godard favorites, but there’s enough to appreciate to please at least fans of the genres.
Film Review