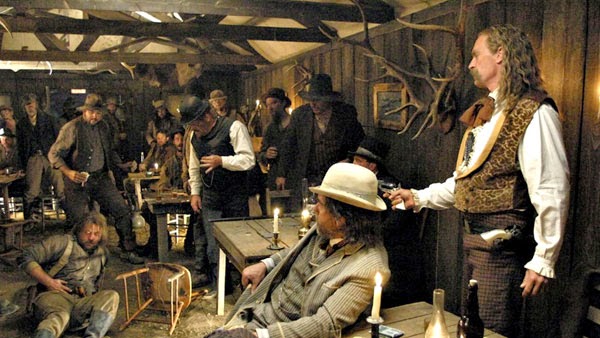 Ian McShane had acted for more than four decades when Deadwood premiered, but few roles made the cultural impact of Al Swearengen. The saloon owner and power broker is a force of nature that turns weaker players into mush. The pilot showed his willingness to get his hands dirty, but that was merely the appetizer. Swearengen enacts multiple plans this week and shows he’ll do almost anything. Former allies mean little once they’ve gone off track, and his targets aren’t just gunfighters. An innocent girl is trouble because she has the wrong information, and there’s suspense at how far Swearengen will go. The lines that normal villains won’t cross mean very little in Deadwood, and the Darwinian conflict is just getting started. The town is muddy and ugly, and characters use the street like a toilet. In this brutal universe, concepts of honor fly out the window. This is Swearengen’s world, and only bad things will befall anyone who stands against him.

What’s interesting about Swearengen’s role is that he’s essentially the protagonist of the show. Seth Bullock is the more standard hero that helps an ally in trouble and is angered by questions about honor. He also doesn’t spend time with prostitutes. On the other hand, Swearengen has no moral code and only wants to stay in charge. He’s a classic western villain but drives all the action. The others react to his moves and are pawns in his game. Bullock and Sol Star may try to stay firm, but they accept exactly what Swearengen wants. His connection with the road agents puts him in a little danger, but you never get the sense he won’t escape it. The question is if he’ll actually kill a young girl to protect the information. That chilling task goes to his right-hand man W. Earl Brown (Dan Dorrity), who’s more afraid of the boss than his conscience. What’s intriguing is the way that Swearengen uses the same road agents to go after Hickok. He’s a puppet master behind the scenes and playing for huge stakes, but that doesn’t mean he won’t step up and commit murder if needed.

Swearengen is a brilliant talker, but there is a question of whether he’s willing to commit the acts. That issue is solved by the end of this episode. Once his plans to take out Hickok and the girl don’t happen, he shifts gears and removes the final piece by stabbing Persimmon Phil (Joe Chrest). Swearengen isn’t dealing with brilliant criminal minds, but that makes them more volatile. A rational guy would recognize that his boss cares little for him. Instead, Phil just strolls right up to his death and joins his buddies in the grave. His very drunk and dim-witted buddy Tom Mason is actually played by a nearly unrecognizable Nick Offerman (Ron Swanson from Parks and Rec) in an earlier role. He’s no match for a seasoned veteran like Hickok, but the ridiculous guy makes an impression because Offerman takes him to the extreme. Rarely has male nudity been presented in such a matter-of-fact way.

Two key scenes reveal the impact that Swearengen has on even the more capable individuals. Calamity Jane acts tough and takes little flak from anyone, but she crumbles under his stare. She’s reduced to a bumbling state and can’t function versus such intensity. I don’t blame her. If Swearengen had been willing to kill the girl himself, there was little she could have done to stop him. The other surprise is seeing the usually calm Bullock get so irritated with Swearengen. He might be able to stand tall among the lesser beings, but his composure falls apart when facing such a tough antagonist. It’s going to be very interesting to see where their conflict heads in the future. Will Bullock step up and become the marshal of Deadwood? Another option is that he'll form a bond with Hickok and vow to take down the boss. Despite their skills, both won’t have an easy time battling such an adversary.

A surprising character turn comes from Doc Cochran (Brad Dourif), who is one of the most heroic figures on the show thus far. The casting of Dourif makes this seem impossible. How is that guy not creepy? Cochran is hardly imposing and stands up for the ailing girl while lying about her condition. He also convinces Brown to lie to his boss and save her, which isn’t an easy feat. Looking very different behind major facial hair, Dourif brings such heart to a guy who’s mostly around to keep Swearengen’s prostitutes on the job. He makes the right argument to Brown and earns a small victory against a guy who rarely loses. Maybe there is hope in Deadwood after all. Cochran joins Hickok, Bullock, and Calamity Jane as people who don’t seem willing to just follow the status quo. Of course, those same qualities put them in harm’s way. There’s no easy way to battle an enemy who plays by few rules.
TV Review