Into the Dark: Space Is a Nightmare 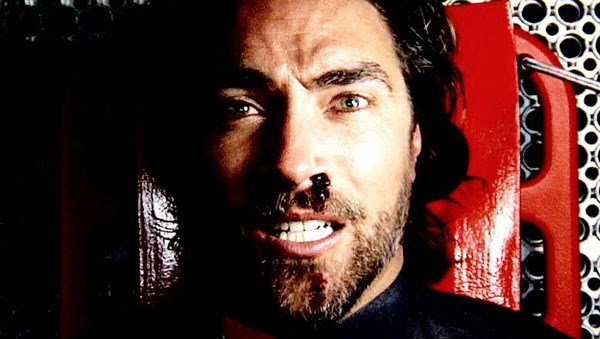 Since the early days of cinema, movies have presented the grandeur and mystery of space. Modern-day explorers venture into the unknown with a spirit of discovery to find the new frontier. Of course, there’s also a much different side to this vast emptiness. Our bodies aren’t built to survive in space, so we’re forced to strap into burdensome suits to work for even a few minutes. Gravity offered a worst-case scenario for all the different ways space travel could go wrong. Other films have gone a step further and revealed alien menaces that rarely have our best interests at heart. They may seem friendly on the surface, but nothing good usually comes from that encounter. Every new flight is just asking for trouble.

This landscape sets the stage for the short film Into the Dark, which offers a bleak depiction of a potential use for space travel. Lukas Hassel (In Montauk) directs and stars in this 14-minute film, which mostly occurs inside a tight capsule. It’s essentially the size of a casket and transports two men to an unknown destination. They appear to be heading for Earth from the Moon, but all is not what it seems. Hassel is known only as 58527, and our first shot reveals him screaming through a small window. He’s bound by tight straps and monitored by an unknown force. A robotic female voice counts down the minutes to some event and reminds him to consider what he’s done. There’s also a second passenger 33963 (Lee Tergesen), and all we hear is his voice from a nearby room.

There’s a real feeling of claustrophobia within this capsule that traps us with these guys. The camera rarely exits this spot and mostly stays on a close-up of 58527’s face. This dark location creates a feeling of dread for what’s the come. There’s little sense that escape is possible from the blackness. We learn very little about them and only catch snippets of a conversation that explains his past. The choice to keep that information from us works because it makes the actions seem even uglier. We hear enough to know that life has been rough for this captive. But why is he flying through space? The answer becomes clear in the end and strikes just the right chord in understanding the rest of the film.

Shot on a very low budget, Into the Dark offers solid effects because it doesn’t overstep its bounds. The visual effects set the stage and do just enough to convince us they’re in space. It’s a crude but effective way to create the environment without distracting us. The story appears straightforward, but there’s one last reveal that adjusts the theme considerably. It’s primarily a character study, but there’s also an allegorical look at modern entertainment. A well-placed Rudy Vallee song adds some levity to the proceedings, but it’s a brief respite. There’s no idyllic spot at the end of this rainbow. The final twist and credits song create an even more somber aura and show the trivial nature of the whole experience. We’ve spent a short time with these guys, yet it means little to the outside world.
Film Review