The Hunger Games: Catching Fire – Freedom Has a Price 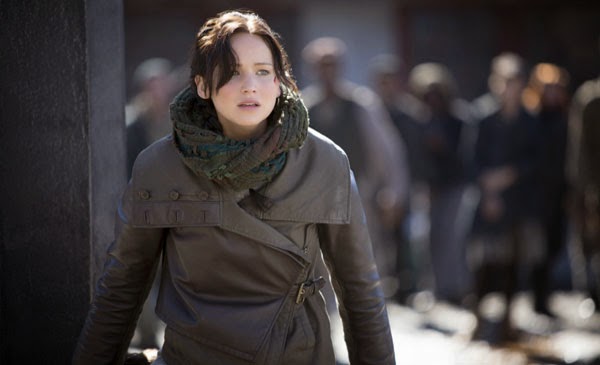 It’s surprising to think back on the build up to the first Hunger Games movie and remember that it was hardly a surefire hit. The $78 million budget showed that Lionsgate saw potential but wasn’t ready to go all in and risk disaster. Jennifer Lawrence had received acclaim for Winter’s Bone and done well in X-Men: First Class, but leading a franchise was another matter. Given her current stardom, it’s easy to forget that the situation was much different two years ago. The success of this series and her work in The Silver Linings Playbook moved her into the stratosphere. By the time of The Hunger Games: Catching Fire, there were few questions that it would become a massive success. The much higher budget and expanded universe helped to deliver one of 2013’s largest releases. Given the loftier expectations, could the sequel work creatively and do more than just earn gigantic profits for the studio?

The prevailing question that hangs over any high-profile adaptation is how faithfully it adheres to the books. This is a boring discussion unless you’re a super fan. I’ve read the Suzanne Collins novels but am hardly an expert. The more important subject is how the story translates into the visual medium. This action-packed adventure is tailor-made for the screen. Even so, we don’t benefit from having Katniss’ thoughts in the movies. That puts more pressure on the supporting players to be interesting characters. Some actors expand the parts and make them come to life (Woody Harrelson, Donald Sutherland, Jena Malone), while others still feel like one-note figures (Liam Hemsworth’s Gale). 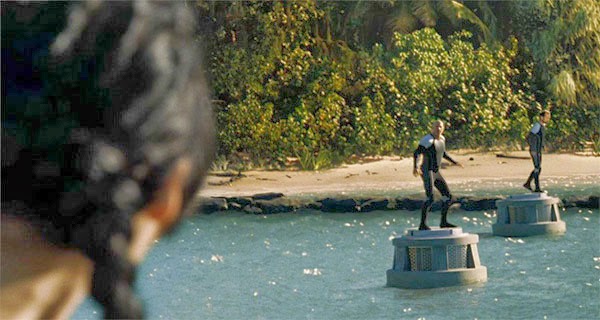 It’s easy to deride the 146-minute running time, but this story feels big enough to handle it. In fact, the Games during the final act seem rushed and could use even more time. It’s a challenge to match the books’ intensity, but Director Francis Lawrence does a solid job. The locations feel claustrophobic when the artificial creations appear, but there’s a vastness that keeps them epic. Lawrence (I Am Legend) uses long shots to show the expanded space and just how small the players are in this setting. The “clock” at the center of the field is stunning and lacks the artificiality of many CGI creations. When Katniss rises into the arena and stands on a perch above the water, we’re right with her in experiencing the initial panic.

The most interesting section is the first hour, which creates a sense of dread about the impending rebellion. Katniss and Peeta did the impossible and survived the Games, but it’s hardly a happy victory tour. When a man in District 11 leads the onlookers with symbols of the resistance, he’s murdered without a second thought. Despite the Peacekeepers’ silly outfits, there’s a real sense of danger when they arrive. When Commander Thread (Patrick St. Espirit) arrives in District 12, he’s just itching for someone to stand up to him so he can whip them into submission. Gale is just the man for the job. These scenes undercut the victories from the first movie and remind us that Katniss still has many obstacles in her way. The forces in power for 75 years will do anything to maintain their grasp. President Snow (Donald Sutherland) is just looking for a reason to remove Katniss from the equation.

With each successive book, Collins grew more confident in showing the nasty behavior of the decadent Capitol. We receive more glimpses this time at people so affluent they take pills to throw up and eat more food. You could easily make the leap that it’s a thinly veiled attack on the rich in this country. They care little about what’s happening beyond their walls, and that’s just the way the government wants it. Collins’ father was in the Air Force, so her background includes some understanding about war and conflict. Heroes like Katniss function as symbols driving the populace to stand up the oppressors, but what are the costs? The end of this movie reveals that negative ramifications are inevitable.

Catching Fire has the challenge of being a middle chapter in an ongoing story without a clear ending. The final outcome of this edition of the Games will surprise viewers unfamiliar with the books and might feel hollow. It also could ramp up expectations for the two movies coming from the final book Mockingjay. Similar to the end of The Two Towers, this conclusion sets the stage for the greater stakes to come. There are less convincing moments, particularly with the love triangle of Katniss with Gale and Peeta. I’m not that concerned with either guy and am glad it doesn’t occupy too much time. Josh Hutcherson brings out the genuine side of Peeta, yet the character just isn’t that interesting. Would we really lose that much if both men were dead? It would raise the stakes for Katniss, but I’m unsure if it would take that much away from the overall product. Thankfully, the romance takes a back seat to the predominant struggle, which has quite a long road to freedom.
2013 Film Review