One of my favorite things about the James Bond franchise is that it’s tailor-made for lists. When you have 24 official films to consider, there are plenty of different ways to tackle it. An obvious choice is looking at the bad guys, who can range between brilliant charmers and the most generic dummies imaginable. While it’s pretty easy to identify Goldfinger, Blofeld, Sanchez, and Silva near the top, picking the worst is trickier. There are many worthy candidates. It was a tough job, but I’ve stuck it out and uncovered my least favorite Bond villains. I doubt any of these will be a shock to long-time fans. I should note that I’m avoiding henchmen and sticking with the main enemies. That list is for another day. Let’s get this rolling! Will the guy with the most ridiculous plan for world domination please stand up?

5. Renard (Robert Carlyle), The World is Not Enough
"You can't kill me. I'm already dead."
I’m a big fan of Robert Carlyle and have enjoyed a lot of his performances, especially Dr. Rush in Stargate Universe. That fact makes the disappointment of seeing him fall short as a Bond villain even tougher. You could argue that Renard isn’t the main villain, and that question is debatable. The final battle in the submarine to save Istanbul is between Bond and Renard, so he’s driving the plot. The idea of a villain who can’t experience pain due to a bullet in his brain is silly, but that isn’t the real problem. Carlyle tries his best to inject menace into Renard, but he just comes off as a stooge. It’s more of a symptom of the Brosnan era than the acting, but he gets pulled into the muck either way.

4. Kamal Khan (Louis Jourdan), Octopussy
"Mr. Bond is indeed of a very rare breed... soon to be made extinct."
It’s hard to find a more forgettable Bond film than 1983’s Octopussy. While it’s more competent than its follow-up A View to a Kill, at least that movie had Christopher Walken and Grace Jones. Beyond seeing Roger Moore dressed as a clown and knife-throwing twin brothers, there’s little to remember. One of the issues is the main villain, Kamal Khan, who never grabs much attention. Jourdan is fine as the Afghan prince working with a rogue Soviet general, but there’s little that sets him apart from your typical villains. The movie is a weird hybrid of a silly comedy with a more traditional spy film, and it barely registers.

3. Ernst Stavro Blofeld (Charles Gray), Diamonds are Forever
"As La Rochefoucauld observed, humility is the worst form of conceit."
Sean Connery returns in this complete mess of a movie, which even wastes the iconic Bond villain. Instead of just having one Blofeld, we have multiple guys made to look identical through plastic surgery. Bond kills him in the opening, yet it means nothing. Charles Gray is so dull and pales in comparison to both Telly Savalas and Donald Pleasance. He’s a cookie-cutter villain who’s disposed of in a particularly lame fashion while trapped in a submarine. It’s unfortunate because this is his last appearance as the lead villain (not counting Never Say Never Again), and it’s such a wasted opportunity. It will be interesting to see if the Daniel Craig Bond gets a chance to face off with the iconic villain in the future. 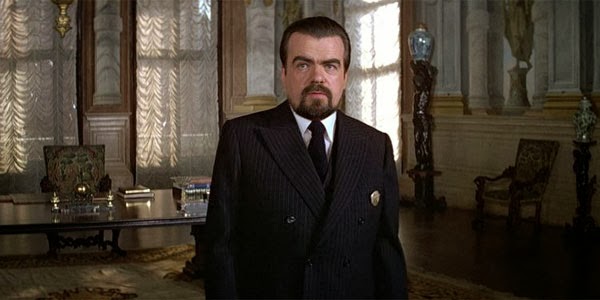 2. Hugo Drax (Michael Lonsdale), Moonraker
"James Bond. You appear with the tedious inevitability of an unloved season."
In The Spy Who Loved Me, Stromberg’s plan was to destroy the world and establish a new civilization in his water base. In the next Bond film, Hugo Drax wants to do the exact same thing! The only difference is the setting of outer space. With his serious face and villainous facial hair, Michael Lonsdale is the obvious villain as Drax. At least Stromberg had some style! Who wouldn’t want to live in his base? Designed to capitalize on Star Wars’ success, Moonraker is cheesy fun. It’s also terrible and suffers due to a bland villain.

1. Gustav Graves/Colonel Moon (Toby Stephens/Will Yun Lee), Die Another Day
"You see Mr. Bond, you can't kill my dreams. But my dreams can kill you."
The last Pierce Brosnan film opens with such potential. Bond is captured and imprisoned in North Korea, which is quite a change. This makes its utter failure even more painful. Gustav Graves’ ice palace is set up to match the famous bases of the past, but everything is so reliant on CGI. The plastic surgery twist doesn’t work because we didn’t get to know his original self. With invisible cars and high-tech lasers, who has time to develop the bad guy? He’s the victim of the excesses, and that leads to the franchise’s worst installment.
Top 5 Lists