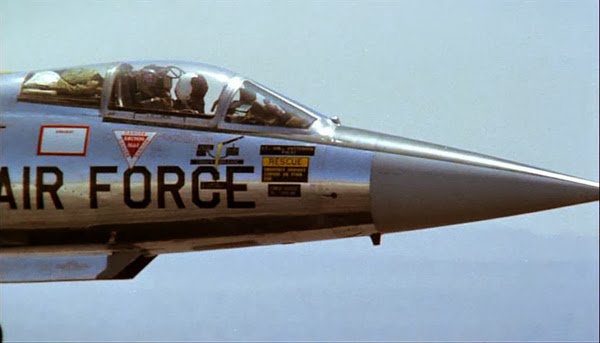 The myth of the American dream has made historic legends out of the loners who venture boldly into the wilderness. The conquistadors that discovered this continent were brave explorers, and the pioneers of the frontier possessed a courageous spirit. It’s easy to fall prey to the myths if we aren’t careful. It’s far less exciting to think of the arriving Europeans as vicious opportunists out for material gain. The old-school cowboys are presented as “real men”, but they also were obsessed with gold and power. Where is this all leading, you ask? In our modern age, do we have our own daring individuals willing to do anything to reach new territory? In Tom Wolfe’s 1979 book The Right Stuff, the heroes are test pilots risking serious danger to fly faster and higher than anyone else. His center piece is Chuck Yeager, the first to break the sound barrier and a legend from that group. The accomplishments were remarkable, but they faded into view once the public grabbed onto a new frontier. Space travel would dominate the U.S. landscape during the ‘50s and ‘60s, and the reasons are more complicated than a quest of discovery.

Philip Kaufman’s 1983 film adaptation of The Right Stuff does a remarkable job translating Wolfe’s ideas to the screen. Although the author disliked the film, it presents an intriguing look at both Yeager (Sam Shepard) and the seven Mercury astronauts. That first group of space travelers must face the prospect of being “spam in a can” while being heralded as the world’s greatest pilots. Was it all marketing spin, or did these guys really have the “right stuff”? Early American rockets always blew up, so even putting themselves on top of them was a big risk. Yeager’s statement on that point is a key moment where he (and the film) endorses those guys as the real deal. They might not have the flight records of Yeager or Scott Crossfield (Scott Wilson), but their bravery isn’t manufactured. When Alan Shepard (Scott Glenn) enters the capsule to be the first man in space, there’s a real chance he won’t survive. The scientists were working in uncharted territory, and they needed astronauts willing to trust them and risk everything. 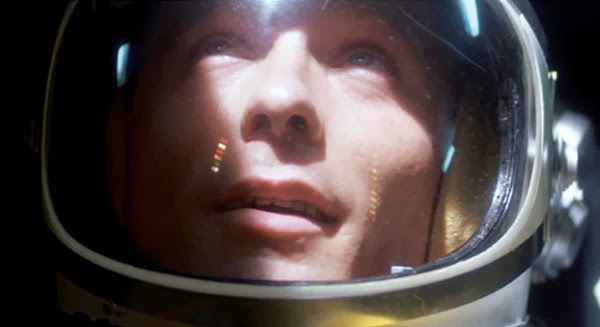 This 192-minute picture is very ambitious, and Kaufman risks losing the audience by putting so much in the story. It’s refreshing to note how breezy the pace feels right up to the end. The longer running time allows Kaufman the chance to include quiet moments like John Glenn (Ed Harris) marveling at “fireflies” in space during his orbital flight. We also get to know how things work at both Edwards Air Force Base and within the space program. Yeager dominates the first act but gives way to the astronauts for a majority of the remaining time. When he returns for one more flight, it doesn’t feel unnecessary and connects us with his original achievements. This is epic storytelling that stays personal despite having lofty aspirations. We rarely get the sense that Kaufman is reaching to connect the major themes. The character depth keeps it grounded and gives time to many in the talented ensemble. 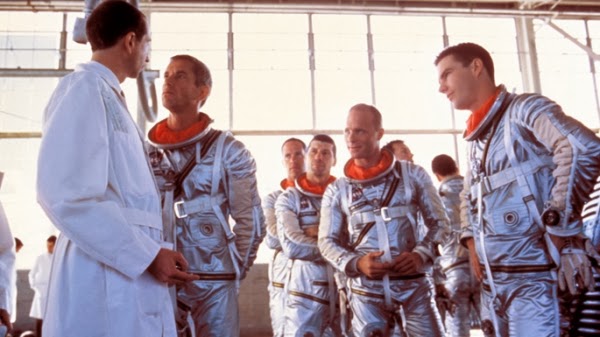 Another positive is the humor, which was a key element of Wolfe’s book. There’s an extended sequence of scientists testing the candidates in ridiculous physical ways. It was impossible to know how the human body would react to space, so they were looking for any evidence of a superior make-up. The true moment of Shepard needing to urinate in the capsule on the launch pad is another fun scene. It reveals the silliness in putting a guy inside such a cramped spot to do the impossible. The image of a chimp taking flights before the men is an exercise in humiliation. The real test pilots would never do that! This conflict between the guys in white lab coats and the pilots was constant throughout the space program. When Glenn and the others stand up and demand control, it’s a key event that changes the game. They’re no longer test subjects with little control over their lives.

The challenge to that theory comes with Gus Grissom’s (Fred Ward) second flight, which becomes a failure when he blows the hatch and sinks the capsule. There are questions about the real-life accuracy of this scene, but it works in this film to show the human fallibility that frustrates the scientists. They care more about the data from the vehicle than the man inside it. Meanwhile, the public gives ticker tape parades to the heroes who show U.S. dominance. Opportunists like Vice President Lyndon Johnson use the guys and their wives to further their own career. The pressures are far greater than simply performing the mission; that’s the easy part. Kaufman shows the competing forces that have little to do with flying. When Glenn backs his wife in refusing to see Johnson, it’s heroic because it pushes back against the manipulation of their great feats. For at least that day, an astronaut strikes back and takes control. 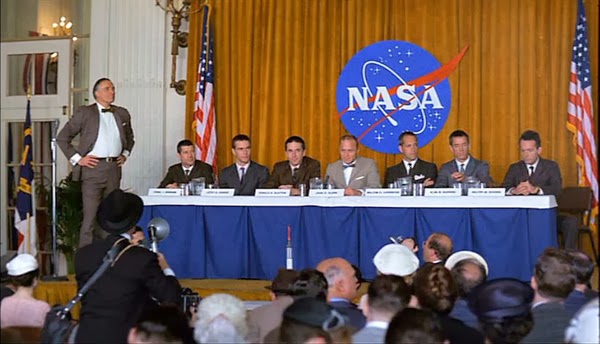 It’s surprising to note how rarely The Right Stuff is mentioned among the great films of the 1980s. It chronicles both the truth and fiction in the American dream during an intriguing era. Some of the best moments involve the success of the Soviet space program, which drives politicians crazy and inspires the U.S. program. Without the threat of a “red moon”, the expensive push to reach new milestones would have happened a lot more slowly. By the final Apollo mission in December 1972, the public had lost interest in space flight. More than four decades later, we’ve never come close to matching that push to explore the stars. Regardless of the real reasons for the Mercury program, it spawned a grand era of discovery. Will we see another in this century? Anything is possible, but the widespread nationalism behind this program is unlikely to prosper again. We’ve all seen too much, and the daily problems here on Earth make this greater challenge seem far away indeed.
Film Review