There’s something thrilling about getting that first job after college. In the right environment, you’re joining a young people with few attachments who are just getting started. My career began at a travel company editing materials sent to passengers before their trip. None of us made any money, but that loose feeling brought a sense of community with nights at bars just hanging out. There’s a similar feeling among the workers at Chicago’s Revolution Brewing in Drinking Buddies, who drift from the workplace right to the bar and repeat that pattern nearly every day. The challenge comes when the participants aren’t in their early 20s and have connections away from the workplace. Where does the life of constant drinking leave the boyfriends and girlfriends waiting at home? How can they compete with the tight bonds that grow among people who spend nearly every waking minute together? There’s no easy solution, particularly when the cycle keeps repeating right in front of their eyes. 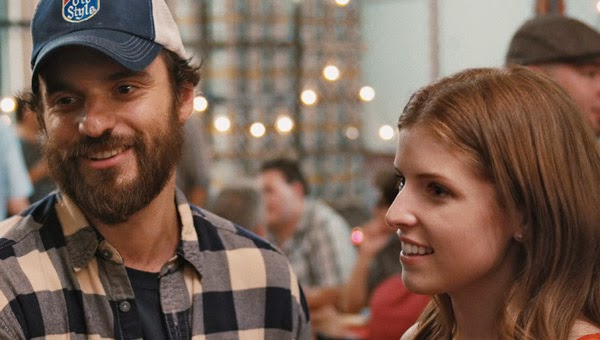 Writer/director Joe Swanberg has made his name directing micro-budget indie films like Hannah Takes the Stairs and Alexander the Last, and he’s only recently become well known. The major draw here is a cast of familiar faces with Olivia Wilde, Jake Johnson, Anna Kendrick, and Ron Livingston. Working without a real script, they shine and create believable characters with depth beyond what we see on the screen. They have actual jobs and aren’t in place just to further a thin romantic story line. Wilde in particular is a revelation in a part that’s much different from recent roles in blockbusters like Cowboys & Aliens and Tron: Legacy. Her chemistry with Johnson is evident from the start, yet the reasons for their characters not being a couple make sense. His grizzled Luke is clearly smitten with her, but he’s been in a committed relationship with Jill (Kendrick) for a long time. Meanwhile, Wilde’s Kate drifts through relationships and only shares a real connection with Luke. She’s essentially playing a character to try and stay together with Chris (Ron Livingston), and their distance stands out when compared to Kate’s bond with Luke.

The idea of two characters that are meant for each other but don’t act is hardly new. The difference here is that it isn’t fodder for one-note jokes or typical conflicts. Swanberg gives an intimate look at why Kate and Luke work together. They’re so comfortable and are able to let their guard down and just be themselves. It’s an unspoken bond that plays out through nights of drinking, playing pool, and just having fun. Meanwhile, their more reserved significant others sit at home and read books in a much quieter spot. Swanberg deftly shows this contrast, which plays out during a trip to a cabin on the lake. Jill and Chris go on a hike, while Luke and Kate hang out and play drinking games. The difference is almost too obvious and would fall apart with lesser actors. Johnson and Wilde are so relaxed on screen that it doesn’t feel like we’re being hit over the head about their connection. 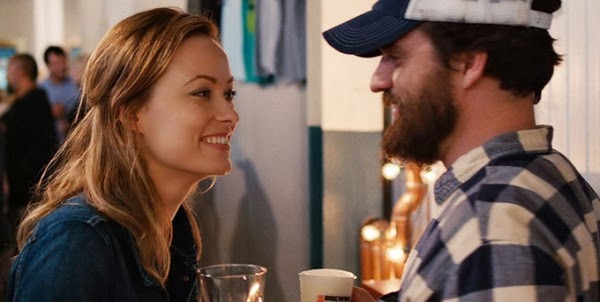 Looming over this story is the constant drinking, especially from Luke and Kate. This raises the question of how much their bond depends on it. Are they alcoholics who connect over consuming large quantities of beer? They work at a brewery, so there’s an obvious interest in it. Even so, the behavior goes beyond a normal passion. They’re having beers with lunch, hitting the bars, and then immediately grabbing a beer from the fridge when they get home. A lesser movie would nail this theme with a tragedy, but we’re living in more subtle territory. Beers are just a part of life, and removing them would essentially change their entire routines. Could they really work as a stable couple if the alcohol subsided? The evidence points against that possibility, which means that little will probably change in the future.

Swanberg works constantly, and there’s been a haphazard feeling to some of his work. That sense is missing from Drinking Buddies, which packs a lot of engaging character material into less than 90 minutes. There’s little forward movement for Kate and Luke on the surface, but there’s a quiet understanding that seems different. The silent final scene at the lunch table is dead-on in showing the shorthand that’s built up over the years. Will they get together? Swanberg leaves it open to interpretation, but I have a pretty strong feeling it’s going to happen. That doesn’t mean their long-term happiness is assured, however. Their hearts may be in the right place, but neither seems willing to truly grow up. Luke can’t bring himself to leave Jill, yet he isn't looking for the marriage she wants. Kate’s a great friend for a night on the town, but does that make her the right match? These unanswered questions bring such depth to this surprising, down-to-earth film. I can’t wait to see what Swanberg does next.
2013 Film Review