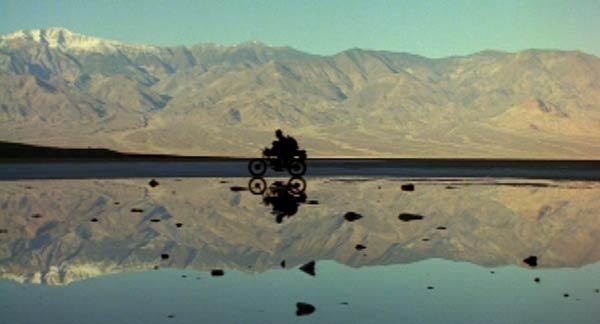 When I set up each marathon, I’m typically looking for blind-spot movies that have been on my radar for a long period of time. However, it’s also enjoyable to check out films that had completely escaped my notice. Thanks to suggestions from the fine folks of the Filmspotting Forum, I’m planning to check out several unknown choices during this marathon. The first pick is Six-String Samurai, Lance Mungia’s offbeat look at an alternate universe where Earth was ravaged during the atomic heyday of the 1950s. Released in 1998, it has built a cult following yet is largely unknown beyond those circles. Despite a $2 million budget, this movie earned little back at the box office during a very limited run. The combination of ‘50s rock ‘n’ roll and Chinese martial arts films isn’t usually a recipe for mainstream success.

What's this story about?
Buddy (Jeffrey Falcon) is hardly an imposing guy, but he packs a serious punch with his skills wielding a samurai sword. He’s also a fine guitar player and is heading to “Lost Vegas” to become the new king following the death of Elvis. In this alternate world, the Russians decimated this country with nuclear weapons in 1957. The shining star remains the Kingdom of Elvis, and Buddy is trying to reach the fabled city of that land. He’s joined by The Kid (Justin McGuire), a boy who apparently lacks the ability to speak. The duo faces off with many denizens from this nasty world, including a dark individual who may be Death himself. It’s a rough trip for Buddy, but he’ll do anything to save rock ‘n’ roll. 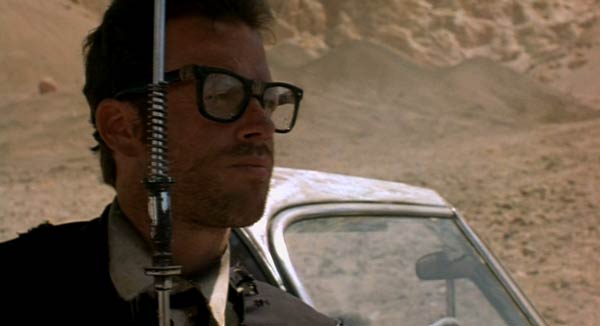 Is the post-apocalyptic environment believable?
This isn’t a realistic environment, but Mungia isn’t trying to create a believable future. Instead, he’s conveying his love for old-school rock icons by putting them in a much-different setting. It’s fairly easy to depict a future wasteland by shooting in the desert, and there are few memorable locations. Mungia’s shooting style emphasizes the goofy residents more than the locations where they live. Their clothes are worn down but hardly the best choice for this world. Buddy wears a jagged old suit that’s probably been on him for years. He’ll keep pressing ahead no matter what obstacles they face along the way.

Would I rather be dead or spend time with these characters?
The best part of Six-String Samurai is the collection of colorful characters. The lead is clearly set up as Buddy Holly and even wears thick glasses in that vein. His ultimate destination also fits with that famous source. The Grim Reaper (Stephane Gauger) closely resembles Slash, so read what you will about the point that Guns N’ Roses killed rock. Other characters resemble famous faces like Richie Valens and Jerry Lee Lewis, who face a similar fate. The Red Elvises provide the music, and they appear as a surf band in a fun scene. I also enjoyed the bowling team who make silly references while trying to take out Buddy. The odd characters help to overcome an inconsistent pace and meandering plot that threaten to grind the story to a halt in its middle act. 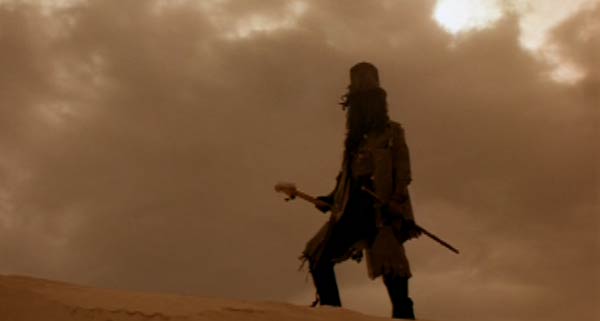 Beyond surviving in this dreary world, does our hero have a compelling quest?
Is there a bigger quest than saving rock ‘n’ roll? Death aims to kill everyone trying to take the place of Elvis, so Buddy may be our only hope. Without music, there’s little chance this post-apocalyptic world can survive. The question is whether this fun premise actually works on the screen. The results are mixed and deliver more of a whimper than a resounding bang. I admire Mungia and Falcon’s attempt to do something different, and there’s plenty of originality within this movie. It’s hardly a dull experience, but I’m not sure there’s enough material to fill a 90-minute feature. The side characters are fun, including an extremely crazy kid who loves the chaos. The little touches keep us interested in Buddy’s quest even when the momentum isn’t as strong.

What are some of the most memorable scenes?
The first act is great fun as we meet Buddy and the oddballs of this environment. It feels like anything can happen, but the scenes get repetitive by the midway point. I should mention the action scenes, which include some impressive stunt work from Falcon. He made his name in martial-arts pictures in China but did nothing after this film. Mungia’s direction leaves something to be desired in for the fights, but it’s clear that Falcon has physical talent. His dialogue also seems dubbed, though his mouth is speaking English. It’s another element that is clever but also keeps us at a distance from the material. 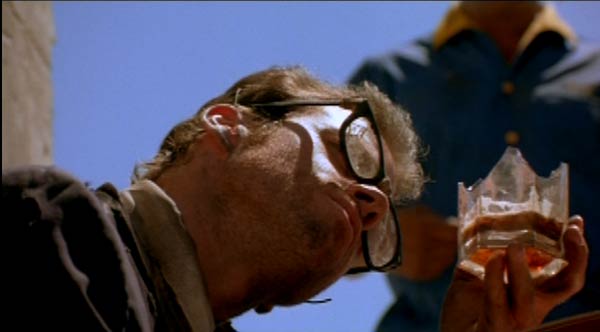 How heavy-handed is the thematic connection to our present-day world?
Thankfully, Mungia is not making grand statements about the horrors of nuclear war. It’s a fantasy film that frequently references The Wizard of Oz along with the music connections. I could read this story as reflecting the death of real rock ‘n’ roll in our modern age. Buddy is trying to save the day and remind us about rock’s origins in this wasteland. I expect that’s taking it too seriously, however. Six-String Samurai is more of a lark designed to build a devoted following. While it didn’t completely work for me, it’s one of those interesting gems that will charm some viewers attracted to less-conventional fare.
Film Review