Next week, the sequel to J.J. Abrams’ surprising reboot of Star Trek will certainly draw huge audiences. Given the resurgence of this franchise, it feels silly to admit that I was very skeptical of the 2009 film that went back to the origin story of the Enterprise crew. Before we’re exposed to scenery chewing from the wonderful Benedict Cumberbatch, let’s go back and look at my favorites from the long-running series. There have been tremendous changes from the original TV series created by Gene Roddenberry. The subsequent films with that cast ramped up the special effects and humor, yet they seem small-scale compared to the new blockbusters. Even so, there’s a definite charm to the work from William Shatner, Leonard Nimoy, and the entire group that started it all. None of these choices will be shocking. This is a case where the conventional wisdom is pretty accurate and has correctly identified the stinkers. Live long and prosper, my friends. 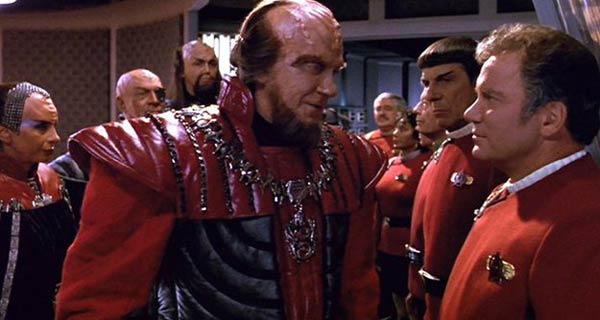 5. Star Trek VI: The Undiscovered Country (1991)
Classic Line: "How on Earth can history get past people like me?" - Kirk
The obvious Cold War allegory of the peace talks with the Klingons feels clunky today, but there’s still plenty to like with the final outing for the original crew. Nicolas Meyer returns and brings a graceful touch that was missing from its serious predecessor The Final Frontier. Christopher Plummer has loads of fun playing the villainous Chang, who quotes Shakespeare while trying to shoot down the Enterprise. Everyone is showing their age, but we know the characters so well that we love spending time with them. The adventure gets rolling in the second hour and provides a sharp conclusion for the first group of movies. It’s a sweet exit marred by the unfortunate send-off for Kirk in Generations three years later.

4. Star Trek (2009)
Classic Line: "Your father was captain of a Starship for 12 minutes. He saved 800 lives, including your mother's and yours. I dare you to do better." - Pike
It’s easy to charge Abrams’ vision of Star Trek with being too different, and I can see that point. Even so, there’s so much to like in this energetic movie that I can forget those concerns. Chris Pine and Zachary Quinto channel Shatner and Nimoy without doing impressions. They make the characters their own while still doing justice to the originals. Nimoy’s appearance is not stunt casting and plays a key role in the story’s success. The entire main cast does a good job, and Abrams brings a vitality that was missing from the final two TNG movies. Can the sequel possibly live up to this high level? I have my doubts, but there’s always a chance with such a skilled group working to keep the magic alive. 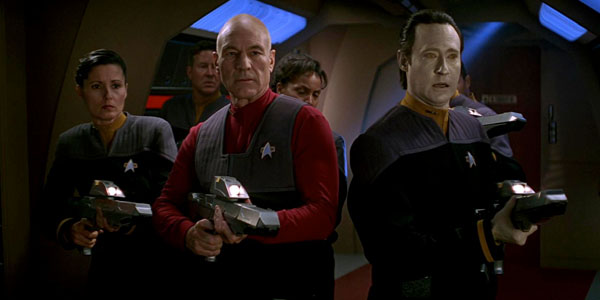 3. Star Trek: First Contact (1996)
Classic Line: "The line must be drawn here!" - Picard
Easily the best of the TNG films, First Contact brings that crew into an all-out battle with the Borg. The battle ends up happening back in time, which is a common trope in the Star Trek universe. The stakes feel so much higher this time, and Patrick Stewart really gives his all as Picard. His experiences with the Borg during the TV series play a big role in his feelings towards that nearly unstoppable enemy. James Cromwell and Alfre Woodard slide in nicely as guest stars and bring life to the more stoic crew. It’s an action-packed affair and a lot of fun, and they don’t waste the chance to show off such classic villains.

2. Star Trek IV: The Voyage Home (1986)
Classic Line: "Are you sure it isn't time for a colorful metaphor?" - Spock
Choosing between the top two choices was difficult. After the more emotional third chapter and Spock’s return, the series shift gears and has fun sending the gang to 1980s San Francisco. There’s a lot of silliness in this entry, including a goofball premise of saving humpback whales. Who knew that Spock was such a good straight man? Up until the Abrams reboot, this was the most accessible Star Trek film. There are no crazy aliens with bad make-up, little space flight, and just a few examples of techno-babble. Instead, it forces the group to navigate through a strange world and figure out how to save the world of the future. It’s endlessly re-watchable and glides through its two hours without any letdown. 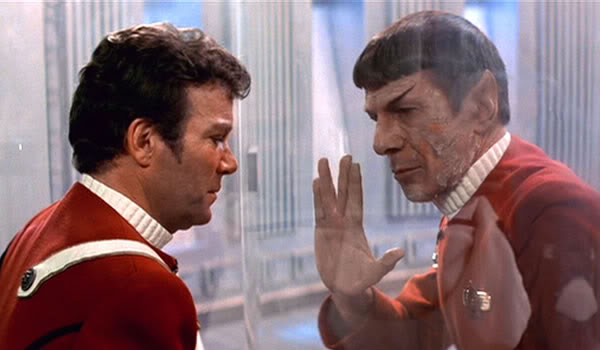 1. Star Trek II: The Wrath of Khan (1982)
Classic Line: "Khaaaaaaaaaaaaaaaaaaaaaaaaaaaaaaaaaaaaaaannn!" - Kirk
It was a close call, but the top pick had to be Nicolas Meyer's thrilling sequel to the bloated first feature. Working from an $11 million budget that was one-third of the previous movie, he delivers a tense battle of wills between Kirk and Khan. The comparison to a submarine battle is accurate and shows the broad possibilities of this universe. Without this success, the franchise might have died and never produced all the films and TV series. There are fewer visual effects, but that takes nothing away from the excitement. Shatner has never been better as Kirk, and Ricardo Montalban finds the right mix of cheesiness and menace as the villain. More than 30 years later, it still packs a punch, especially in the emotional final scenes. If you've missed out on the early movies, see this one as soon as possible.