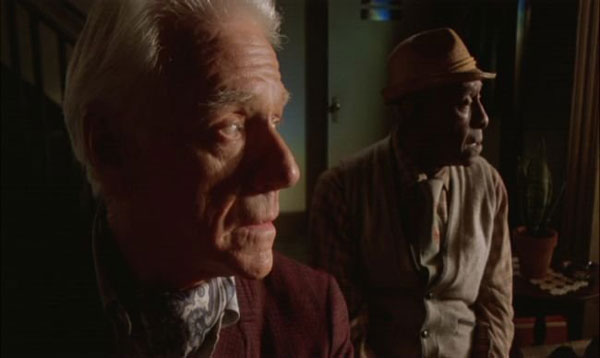 Steven Spielberg frequently identifies with the joys of childhood. Movies like E.T. the Extra-Terrestrial and Hook tackle this subject directly, while Empire of the Sun and A.I. Artificial Intelligence explore the tougher side of being young. Given this fact, it's no surprise that Spielberg's entry in the anthology film Twilight Zone: The Movie covers this theme. This is a tricky movie to consider because there are dramatic tonal shifts between the segments. Three of the four parts remake an original episode of the famous TV series, and the other doesn't feel out of place. It opens with John Landis' new story about an angry racist sent back in time to encounter Nazis, the KKK, and U.S. soldiers in Vietnam. It's an obvious approach but employs the sense of dread that exists in the later segments from Joe Dante and George Miller. Those parts are the highlight and present two nasty scenarios with thrills and clever special effects. Given Spielberg's talent, you'd expect that his contribution would at least match up with the other guys. Unfortunately, his approach is too straightforward and negates what could be an interesting premise.

Scatman Crothers (The Shining) stars as Mr. Bloom, an extremely upbeat senior citizen who's a new arrival at the Sunnyvale Rest Home. The residents seem resigned to living out the rest of their days with quiet rest. However, it's clear they're not a happy bunch. Even the grumpiest old man Leo Conroy (Bill Quinn) wants to connect with his son and live a fuller life. Bloom convinces everyone except Leo to go outside one night for a game of "Kick the Can", and they magically transform into kids. This seems like a wonderful miracle, but most decide to actually return to their older selves. One guy just can't resist and ventures into the night as a boy once again. It's clear that Bloom is reminding the residents that being old is a state of mind and not a prison. Leo doesn't become a kid, but he's saved by the experience and seems ready to enjoy the rest of his life. This differs considerably from the original episode, where the transformed children don't return to their original bodies. Bloom is also a new creation and adds a sense of mysticism to this tale. 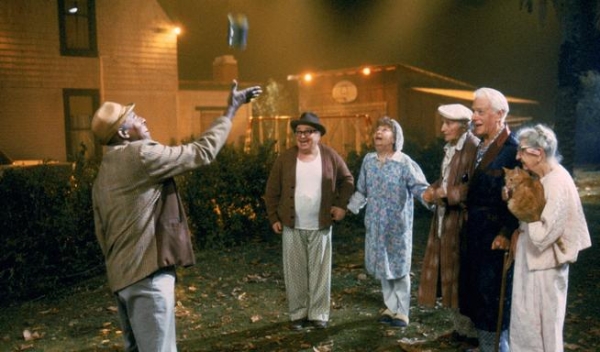 The "Kick the Can" remake has an engaging premise that could have been interesting. Instead, the themes are so blatant that it's too generic. Jerry Goldsmith's music constantly reminds us that we're seeing something "amazing", and forcing the charm is rarely wise. Spielberg's critics push the idea that he's too sentimental, and that's usually a simplistic take on his career. In this case, however, that claim is accurate. This literal representation of what happens when you're "young at heart" is so obvious that it loses its steam. It also suffers from the use of "magical black man" who saves the lives of white people. This tactic is rarely seen these days yet still remains through movies like The Legend of Bagger Vance. Crothers does a good job, but it's impossible not to consider this unfortunate convention when watching this segment. The movie has some great moments, particularly in Miller's chilling "Nightmare at 20,000 Feet" final segment. Spielberg creates the most forgettable story and needs more subtlety to make this concept succeed.
Film Review