Amazing Race 22, "My Cheese is Out of Control" 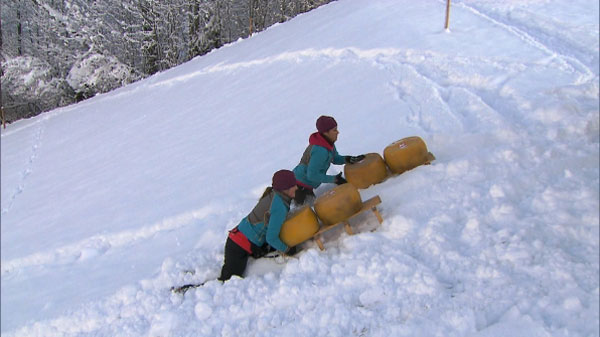 The challenge when analyzing teams on The Amazing Race is realizing that survival is all that truly matters. Pairs have bumbled their way across the globe but ended up winning it all because they never finished last. The latest players to fit this description are Chuck and Wynona, who have remained near the back of the pack throughout this season. Even when they’ve finished higher, it’s been the result of struggles from other teams. This week, their luck finally runs out because of a penalty at the mat. The amazing thing is that they almost survive once again. When an exhausted Joey and Meghan struggle to find the Pit Stop, it gives the Alabama couple another shot to grab a life boat. This time, they aren’t so lucky and face an unfortunate exit. Even when a team’s clearly overmatched by the competition, it’s rarely fun to watch them go out this way. Standing helpless at the mat, they watch as the YouTube hosts arrive and are awarded with the fifth spot.

The difficulty in watching Chuck and Wynona is noticing the huge disparity in their excitement about the race. She’s physically weaker, but that isn’t the main problem for them. Instead, it’s her downbeat attitude about every new task that makes it painful to watch them. This race includes some strong players, but there are few superstars within this group. Chuck is capable and willing to dive into anything, and they might have a chance if Wynona could take a different approach. She psyches herself out right away, and that makes their success nearly impossible. He has gotten nastier with his comments in the past few weeks, so that probably doesn’t help her outlook. Even so, it has to be frustrating to hear frequent complaints about her weaknesses. One of the best aspects of this show is watching teams go way beyond their comfort zones and overcome a difficult challenge. Chuck and Wynona could have been fan favorites with an attitude change. His outrageous mullet and unique skills make them prime candidates to achieve that label. Instead, they became frustrating and lose the underdog story because of a poor attitude. 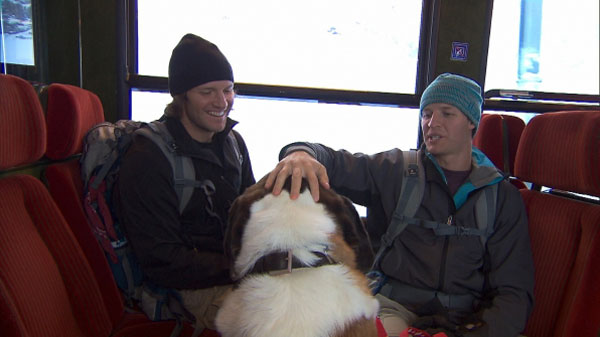 The episode begins with a large amount of material that plays no role in the outcome. There’s a flight to Switzerland and multiple train rides, but the group ends up bunched together. The YouTube hosts and roller derby moms miss a connection, but later operating hours keep them even. Fifteen minutes have passed in the episode before a task separates the teams. Thankfully, there are some exciting challenges that make up for the slow start. Teams must choose a very cute St. Bernard rescue dog and deliver it by train to a rescue guide. This episode takes place among the Bernese Alps, and the scenery is amazing. The Roadblock sends players up the Eiger peak to retrieve a Travelocity Roaming Gnome. It’s a simple task of walking across a wood plank, but it’s complicated by the serious heights. Looking down isn’t wise. Most players roll through it, but Wynona struggles mightily. Her confidence is at an all-time low, and moving gingerly through this task keeps her downbeat. Chuck doesn’t help matters but harping on her slow speed either. They fall behind and slow down a waiting Joey and Meghan, so it’s clearly a two-team race to avoid elimination.

The week’s major challenge is a Switchback, which brings back a famous task from a past season. This one comes from the premiere of the Amazing Race 14 and involves transporting 50-pound wheels of cheese on a sled. The difficulty comes from the steep hill, which makes them nearly impossible to navigate. The extra fun this time comes from the deep snow. Climbing up the hill is even tougher than heading down, and it takes a rope to make the hike even possible. Unlike the Switchbacks in previous seasons, this one remains very difficult on the second run. Katie has an awful time climbing up the hill, and it’s even worse for Wynona. Most teams just ride the sleds and hope for the best, and they eventually reach the end. Anthony and Bates grab their third first-place finish in a row and are clearly pulling away from the pack. The top four teams finish strong, and Meghan and Joey pull well ahead of Chuck and Wynona. They decide to throw the cheese down the hill, which would be smart without the penalty. A lack of cabs and bad directions for Meghan and Joey almost knock them out. Even with these difficulties, they provide a model for the right attitude to have on the race. She is moving slowly and not doing well, but they keep moving and stay in the competition. He keeps supporting her and calls the race the best time of his life, so they aren’t just focused on the top prize. 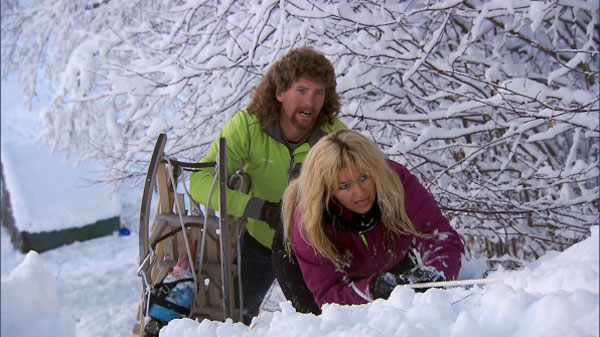 Despite the craziness of this season, the five teams remaining are the right group. The hockey players may be the front runners, but they’ve had problems with navigating in the past. There’s no guarantee they make the final three given the unpredictable nature of this race. After a rough start, this episode provides good entertainment and a spectacular location. It’s easy to look at the massive peaks and call them “amazing”, which hasn’t been the case as often lately. Could the inconsistent show be heading for a strong finish? It’s hard to say at this point, but this episode reveals more promise for the season’s final act.