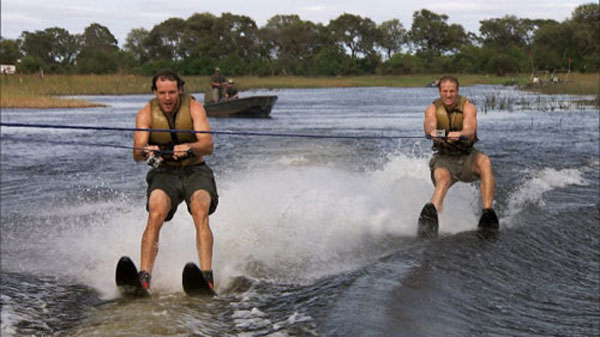 In some of its best seasons, Survivor thrives on making its strong competitors look silly. Players talk about being in control and running the show, then they’re immediately booted by the “weaker” contestants. This trend rarely happens on The Amazing Race, which frequently has teams dominate the seasons. There are notable exceptions like the Beekmans’ win last season, but it isn’t uncommon to watch a team roll through challenges and stay near the top of the pack. The audience believes the smart and physically capable players will do well, especially in the race’s first half. Those expectations have been thrown out the window in the 22nd installment. John and Jessica rolled through the early episodes and then self-destructed in stupendous fashion. David and Connor were clearly a top team but were felled by a serious injury. On the other hand, a very limited pair like Chuck and Wynona have benefited and even found a way to advance in the standings. This week, Pam and Winnie join the list and fall apart in a pretty simple Detour. After finding their groove and becoming a contender in recent weeks, they’re quickly booted right out of the race.

Beyond the surprise exit, this leg includes plenty of strange moments that fit this race’s tone. Two teams receive speeding tickets and must go to a local station to pay the fines. Apparently, Botswana also funds its police departments with speed traps. Caroline and Jen try to flirt their way out of a ticket, but the stern officers aren’t fooled. They waste a lot of time exchanging money and quickly fall towards the back of the pack. Max and Katie start in last and continue their unfortunate run by also getting a ticket. This is a particularly grumpy week for a lot of racers, and Katie takes the cake. Max does make it easy by crashing into a pole leaving the station, so it’s clear that he’s feeling the pressure. Meghan and Joey also struggle with navigation and luck out by accidentally spotting Max and Katie on the road. If not, they might still be looking for the clue. This second leg in Botswana is a bit tougher than last week, but it remains small scale and confined to a fairly limited area. 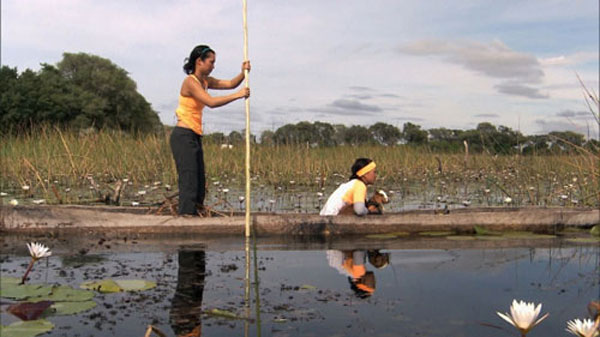 Teams start by heading to Boro Village, where they immediately learn about the Fast Forward. This placement is frustrating because it basically hands the victory to the leading team. Since there are a limited number of Fast Forwards in this race, there’s no downside for Anthony and Bates to take it. Assuming it’s a doable task, they get a free pass that’s a lot more important than the Express Pass. This challenge involves water skiing for a mile in waters that could possibly include crocodiles. Bates wonders if he can stand up on the skis, a feat that is no joke given personal experience. His concerns are unfounded, and they roll through the task and win the Fast Forward. They’re clearly thrilled and are the definite front runners at this point. Getting the chance to relax at the Pit Stop while the others struggle should also give them an edge in upcoming legs. The remaining six teams head for the goofy Roadblock, which requires them to transport goats on a makaro canoe. It’s trickier than it looks because of the balance needed to keep such a slim canoe from tipping.

This Roadblock brings out the worst in some players, particularly Mona. Wynona seems ready to quit while trying to keep them rolling, but she powers through it. This task recalls the infamous moment when Flo was ready to quit in season three. Zach desperately got some locals to help them cross the water in an even trickier vehicle. Reminding long-time fans of this nasty scene isn’t wise. Pam and Winnie maintain their second-place spot up to the Detour, which gives the options of “Brains” or “Brawn”. These are strange titles, and neither is accurate. The former is really just about spotting cut-outs of 10 animals and remembering them. It’s hardly a complex mental puzzle. This is the wiser choice since it doesn’t involve actual living things. “Brawn” involves finding a way to get the donkeys to move once their cargo is loaded. Hilariously, the method involves dangling a carrot in front of their mouths. Pam and Winnie quickly realize this is challenging and switch to the other Detour. That feels like a wise choice, but that assumes they’ll have keen eyes in that task. 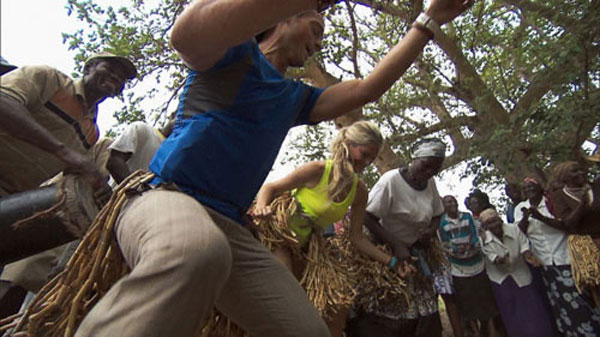 This episode feels designed to set up a final battle with Max and Katie trying to survive against Joey and Meghan. They’re scrambling through the donkey challenge, and it’s tense when the animals start revolting. That’s just a smokescreen once Pam and Winnie switch Detours again, however. It’s a stunning drop because they’ve rolled through most tasks. Without their struggles, Max and Katie would have been eliminated. They also face an easy Speed Bump of doing a ceremonial seduction dance after getting their face painted. It slows them down a bit and would have been the difference. Will they recover again? Beyond the hockey players, the remaining teams all have major issues. Limited players like Caroline and Jen and Chuck and Wynona struggle every time yet still avoid elimination. The unpredictable contest might go anywhere at this point, which should provide an exciting finish.
Amazing Race TV Review