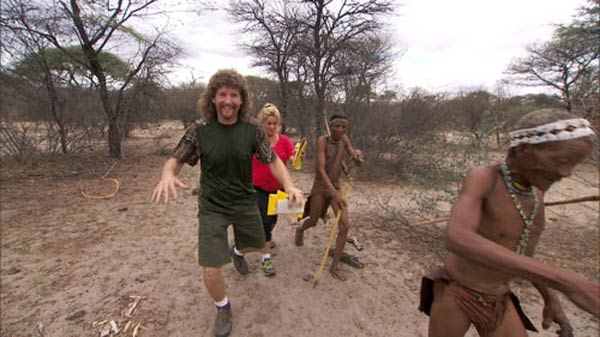 This week’s Amazing Race opens with an apology for insensitivity towards Vietnam veterans in last week’s episode. Phil’s statement is a response to an outcry led by Fox News that included calls to boycott the series. While those claims seem over the top, it spotlights a challenge for a show that’s moving so quickly through other cultures. A downed B-52 bomber was used as the backdrop for a clue, and a goofy song described the wonders of socialism. The current version of this competition plays out so quickly and rarely takes a breath to consider whether it’s cheapening the countries on display. This standard may be unfair for a reality competition, but that’s the challenge for a show that’s using aspects of these locations. While the apology is understandable, it’s harder to take it seriously when it’s followed by yet another odd venture into Botswana. The local Bushmen play a key role and are used almost solely for laughs about their customs.

“Scorpion King Hunter” begins in Hanoi and sends teams flying a long way to Maun, Botswana. There’s a really simple task of determining where Maun exists before they can book tickets. Sadly, the increasingly dim Chuck and Wynona just start throwing out countries from all over the world like Australia and Paraguay. That doesn’t seem like the best tactic. Predictably, they end up on the last charter flight in Botswana despite all teams landing at the same time. The teams are only 15 minutes apart on each flight, so there are chances for improvement. After choosing three Bushmen at the Roadblock, the players must go hunting for a scorpion. These guys are very cute and fun, but it’s still a little awkward to watch the contestants interacting with them. Admittedly, most city dwellers would have a similar reaction, so it’s hard to be that tough on the racers. A notable exception is Katie, who complains about the smell while standing right next to them. That’s not cool. The Roadblock does include the striking moment when a Bushman puts the scorpion inside his mouth. Explanations include putting it to sleep or cleaning it so the player can hold it, but he’s really just showing off for the cameras. Several contestants nearly lose it with fear, particularly Joey. His over-the-top expressions aren’t winning him a lot of fans among the cast, but he’s charming on screen. Wynona finally does another Roadblock and spends a lot of time complaining. They head for the Detour in last place and need something positive to give them a chance. Thankfully, it’s time for a challenge that’s tailor-made for Chuck’s unique skills. The Detour options are “Fire” and “Fowl”, and the latter choice is the perfect solution for an outdoor tinkerer. The task requires them to set a rudimentary trap, which seems a lot easier than making fire with zebra manure. Along with Pam and Winnie, they leap from the back of the pack and into second and third place. The reason is the much greater difficulty of the fire challenge, which only the hockey players can master. Anthony and Bates are clearly strong competitors and finally pull it together to grab the top spot.

This is one of the most glaring examples of a serious discrepancy between the Detour options in a while. Making fire requires a delicate touch and isn’t easy to master, while putting together the trap seems pretty straightforward. Four teams end up switching Detours, which shows the surprising gap between the choices. Max and Katie stick took long with the fire, and it causes their doom. While it’s a non-elimination leg, it gives a reminder that no team is safe with this cast. Because of the double leg and David and Connor’s quick exit last week, it feels like this race is running in place. It’s surprising that this is the season’s first true non-elimination leg. The lack of a departing team adds to this episode’s very light tone. When you have three barely clothed Bushmen hanging out in the back seat of a modern SUV, it’s hard to take anything seriously. The teams are having fun playing around in Africa, so it’s a breezy leg. It’s also a major shift from the tense battle to avoid the U Turn in the previous week. 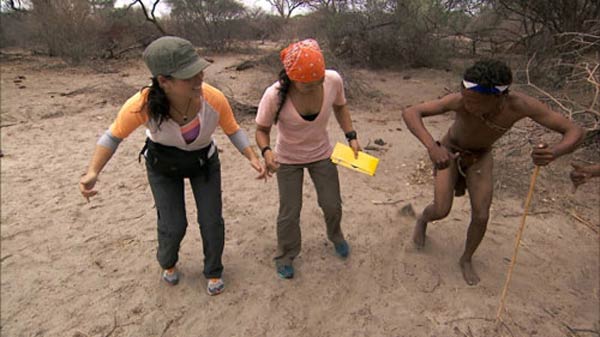 The Amazing Race frequently visits famous locations, including the Hanoi Hilton and the cell where Nelson Mandela was imprisoned. The difference in more recent examples is the breakneck pace, which doesn’t give them a chance to show reverence. In season six, Gus was moved to tears by a visit to a Slave House in Senegal, and it was a touching moment. Hearing Ian talk about returning to Vietnam in season three after fighting in the war was also handled well. The producers aren’t willing to slow down the pace to take a moment and prefer to go for silliness over depth. It’s still an entertaining series, but something has been lost over the years. The latter seasons are starting to flow together and don’t have the same classic moments. It’s still a popular show that draws viewers, so it’s hard to fault them for sticking with a proven formula. However, there’s definitely more wiggle room for them to do something more. They’d rather draw a goofy laugh about Bushmen than teach us about their culture, and that’s a shame. It’s more easily digestible and provides some thrills, but the issues just offer a reminder of the much greater past achievements.
Amazing Race TV Review