Survivor Caramoan, "She Annoys Me Greatly" 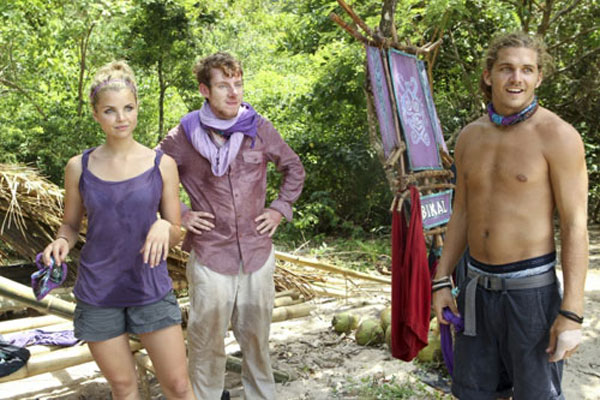 For their second version of “Fans vs. Favorites”, the Survivor producers are clearly going for memorable television with their returning players. There are few examples of people who dominated their original seasons, and only one made the Final Tribal Council. A surprising choice is Francesca, who was voted out first in the Redemption Island season. She was good television and clearly knows the game, so bringing her back is an exciting change of pace. Strangely, Francesca enters this new season with a reputation as a strategist despite her limited time. Her former tribe mate Phillip is also back with her again, so the risk is high for a quick exit. Despite the dangers of repeating her prior difficulties, she falls into the same traps. Arriving with a big chip on her shoulder, she plays too hard in the early days and receives the same cruel fate. A 6-4 vote sends her packing once again right at the start. She’s intelligent and doesn’t deserve the reputation as the worst Survivor player ever, but that label’s now been certified in the show’s long history.

An interesting counterpoint is Malcolm, who’s a mystery to everyone because his season aired after this filming. He clearly recognizes the danger and immediately warms himself up to the entire group. He also sits back and doesn’t strategize much (at least on camera), which is wise because he’s an unknown. Andrea and Francesca are playing the hardest from the start, and this puts them both in jeopardy. Despite their status as experienced players, this group clearly hasn’t mastered the strategy. The exceptions are Dawn and Cochran, who quietly sit back and choose the best option for their long-term success. In a large group of 10, having an ally to trust is a key factor in surviving the early chaos. Their understated approach is going to keep the target off their backs and towards more aggressive players like Andrea and Phillip. Wild cards like Brandon can’t stay this contained for long, so moving away from his group is another smart choice. Even so, the scrambling right before Tribal Council shows that this tribe is a long way from reaching a consensus. 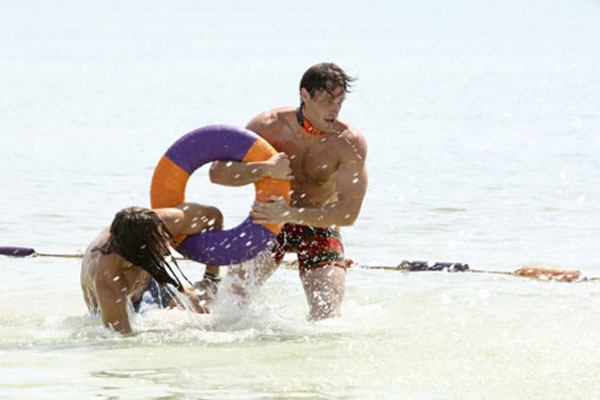 The show begins with the introductions of the favorites as they exit a helicopter to the smitten fans. It’s clear that most have no idea who some of them are, but Cochran and Dawn get big receptions. Brandon is described as “Russell Hantz’s nephew”, so it’s clear that he’ll never escape that bruiser’s shadow. They battle it out in an opening water challenge with plenty of tackling. Malcolm even loses his pants to win a point, which recalls a topless Sugar running to victory in the opening Heroes vs. Villains challenge. His prospects in the game are a bit higher than hers, however. The favorites seem united and enthusiastic, but that camaraderie is not going to last. One of the most prominent fans is Shamar, a very large marine who served in Iraq. His decision to sit back and not help with the shelter seems disastrous, but his fire-making skills compensate quickly. His choice to step up at the last minute and save the day is actually pretty brilliant for a short-term win. They struggle at first to get rolling, but the fans actually seem pretty capable at setting up the camp.

Starting too hard in Survivor is dangerous, but there are some basic strategies that anyone should use the right way. An important one is having a strong understanding of basic math. When a tribe has 10 people, building an alliance of four is no guarantee of dominance. This mistake is compounded when the other players see the connection and band up against the foursome. It isn’t rocket science! The self-proclaimed “best-looking” duo of Eddie and Hope immediately bond, while Reynold and Allie decide it’s wise to hook up on the first night next to everyone. If these four make the end of the game, it will be shocking. Reynold is athletic and smart, but he also cites one of the reasons for choosing Allie is because she isn’t the most attractive girl. Even if it works for him, this is still icky reasoning. Most of the other fans receive limited screen time, but they seem more likely to do well. Michael is forming solid relationships with everyone, and even bearded Matt seems to understand the game. Sherri also looks like a force who’s in the right position in this tribe. 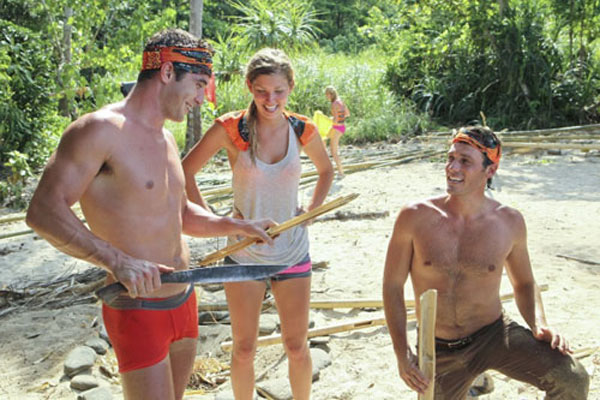 The immunity challenge takes place in an impressive structure that stands four stories above the ground. The favorites grab a significant lead thanks to superhuman feats from Erik. This changes dramatically when Reynold proves his talents in throwing sand bags. He’s clearly had some practice at some local bars. He comes from behind and passes Malcolm to take the win. Phillip seems likely to exit, but no one seems that excited to get rid of the volatile guy. This makes sense because he’s unlikely to form real bonds with other players. The likable strategists are going to be a target if they don’t form the right alliances. Both Francesca and Andrea do plenty of legwork to solidify their position, but it’s tougher within such a large group. Even with some last-minute flips from Erik, Brandon, and Brenda, it still isn’t enough to change Francesca’s fate. This 90-minute premiere moves swiftly and has plenty of fun moments. Even with some dim-witted fans, there are enough solid players to make for an exciting season. Francesca’s exit is assured when the editors show her comments about “eating a rock” if she goes out, but it wouldn’t have been shocking to see Andrea leave. This unpredictability should lead to plenty of surprises and thrills going forward.
Survivor Survivor Caramoan TV Review