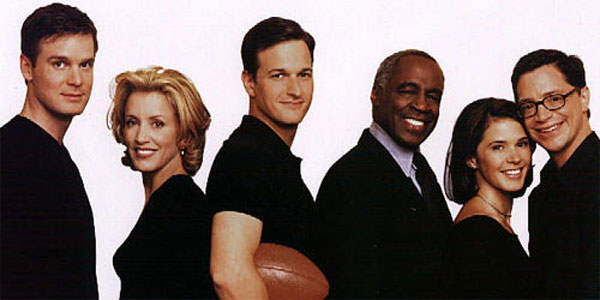 This week, I was thrilled to join Kate and Simon from The Televerse to discuss one of my favorite shows. Sports Night is an entertaining take on the half-hour comedy from Aaron Sorkin that works because I love the characters. There's so much to like about this show, which aired on ABC from 1998 to 2000. The main cast is remarkable and includes Josh Charles (The Good Wife), Peter Krause (Six Feet Under), Felicity Huffman (Desperate Housewives), and Joshua Malina (The West Wing). This fast-paced look at a Sportscenter-like TV show includes plenty of wit and a relaxed atmosphere. I just enjoy spending time with these characters. Kate, Simon, and I discussed why we like this series, but we also delve into some of the murkier issues. Sorkin often struggles to write his female characters, and the trend is present here. This segment on The Televerse is their DVD Shelf, which appears at the end of the show. They also do a great job covering the shows currently airing each week. You can check out this episode through this link.
podcast The Televerse