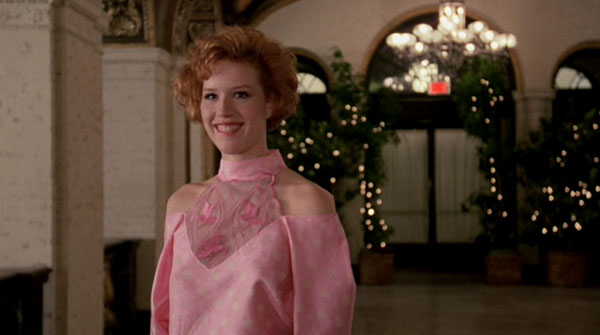 My first post for this blog covered Sixteen Candles, which I hadn't seen prior to that time. It was part of my 1980s Comedies marathon, which also included The 'Burbs, Trading Places, and After Hours. I was still developing the format, and these movies offered a perfect way to get started. More than a year later, I figured it was time to go back to the subject of my first marathon. There still are some major '80s comedies that are blind spots for me. I grew up during that time, but I was a bit too young to identify with the high-school films of John Hughes. He didn't direct Pretty in Pink, but his stamp as the writer is all over this 1986 tale of romance and class. Molly Ringwald returns once again to play the lead role for Hughes, and it remains well-known more than 25 years later.

What's this movie about?
Andie Walsh (Molly Ringwald) has a good sense of fashion but doesn't get along well with the rich kids at school. She lives with her heartbroken Dad (Harry Dean Stanton), who's struggling to get back on his feet. Her best friend Duckie (Jon Cryer) has feelings for her, but she doesn't see it. Andie's charmed by Blane McDonnagh (Andrew McCarthy), a fancy lad from the other side of the tracks. She's embarrassed by this gap, and he faces nastiness from his friends. His best friend Steff (James Spader) is rough on him about their relationship. With the prom approaching, Blane must decide where he stands. Does he care more for Andie or his shallow rich friends? Meanwhile, she tries to deal with growing feelings for a guy who may be ready to run for the hills. 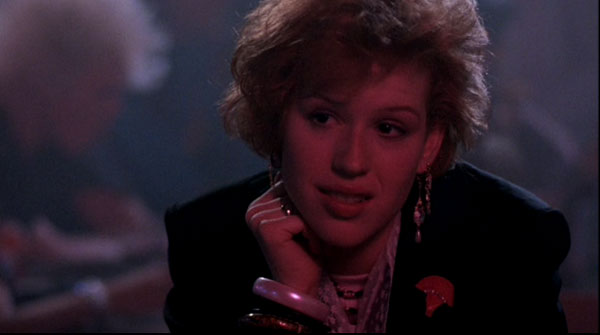 Does the story hold up well today?
Pretty in Pink is definitely locked into the 1980s with its fashions, music, and specific take on high-school romance. However, it also conveys that Hughes touch that makes it feel timeless despite being connected to the time period. I'm likely responding this way because I grew up in the '80s, but I know that younger people have similar reactions to Hughes' work. Teenagers can identify with finding romance with someone from another social circle and dealing with the ramifications. The conflict might not be as simple as the rich kids/poor kids situation presented here, but it still works. It's not as sharp as other Hughes films like The Breakfast Club and Ferris Bueller's Day Off, however. It might be easy to blame Director Howard Deutch for this difference, but that's too easy. The Hughes elements are all there, and much of it still works, but it's hard to catch lightning in a bottle every time. 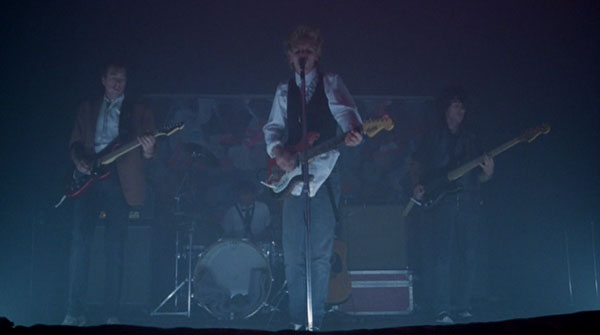 What are the signature moments that embody the ‘80s and its movies?
There are plenty of good examples for this question, but I'll just focus on the soundtrack. The final scenes with "If You Leave" by Orchestral Manoeuvres in the Dark playing are iconic and firmly connect that song with this movie. I challenge you to listen to it and not have it stuck in your head all day. It's an endlessly catchy melody that's only usurped by the painful events on the screen. But I'll return to that later. Several scenes take place in a bar with a house band, and those performances fit perfectly in the mid-'80s. Bruno plays "Rudy" early in the movie, and The Rave-ups perform several rockabilly tunes during Andie and Blane's big date. Also, the Psychedelic Furs' title track still gets airplay on retro shows to this day. The music sets just the right tone for this breezy picture and helps it to glide quickly through its 96-minute running time. 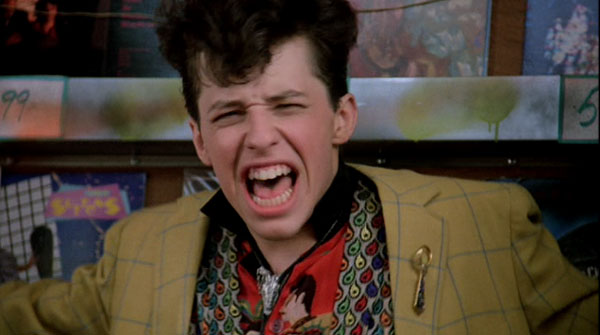 What performances stand out as remarkable and/or ridiculous?
Molly Ringwald plays her typical role, but she can't compete with the unstoppable force of Jon Cryer as Duckie. He steals every scene, and the movie suffers when he takes a back seat in the second half. His best moment is the dance performance while lip syncing to Otis Redding's "Try a Little Tenderness" in the record store. It's the highlight of the movie and makes us wonder why Andie can't see him as more than a friend. Duckie's unrequited love takes center stage in the early going, but she only has eyes for Blane. James Spader brings his trademark arrogant and sleazy demeanor to Steff, the evil rich guy. He throws lavish parties, hooks up with Ellen Tigh from Battlestar Galactica (Kate Vernon), and wreaks havoc throughout the movie. Annie Potts is also a lot of fun as Andie's boss and friend Iona with her many different hairstyles. I also have to mention Andrew Dice Clay showing up as a bouncer named the "Dice-man", which is a nice touch. 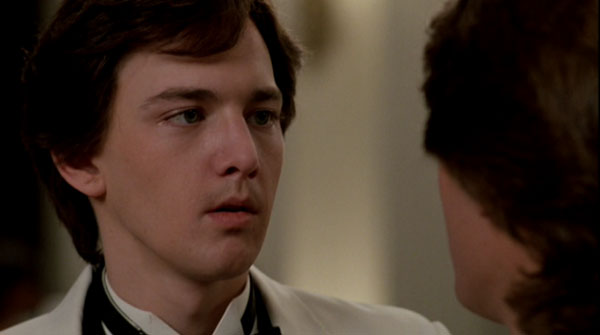 What are some of the most memorable scenes?
It's impossible to cover Pretty in Pink without discussing the ending, which has riled up audiences for years. It makes sense that Andie might have problems seeing Duckie as more than a friend. The problem is that the movie spends so much time showing why he's a great guy. Blane means well, but he has little in common with Andie. Also, he seems to have very little personality. All it takes is some pressure from Steff to get him to turn his back on her. Andrew McCarthy gives a speech in the end to win her over, but her response seems out of character. Hughes wrote the entire film intending to bring Andie and Duckie together, but test audiences didn't like it. Ringwald talks in a DVD feature about not feeling the connection with Cryer, and her behavior sabotages Hughes' intentions. This makes it trickier to decide what I think about the end. It feels like a betrayal of Duckie's arc, but would that have been completely satisfying either? On a related note, Iona's final scene also feels out of place. Her conservative makeover reminds me of Ally Sheedy's change in The Breakfast Club, and neither feels like the right move for the character. 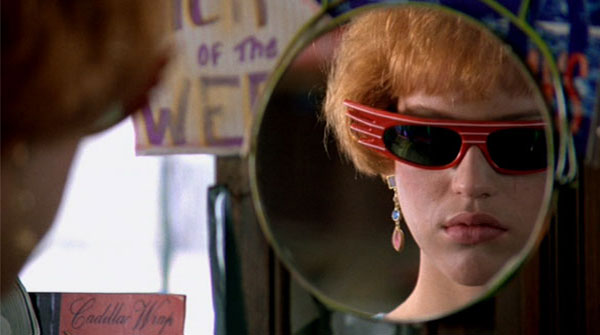 Have I really missed anything by not seeing this movie?
Despite some issues in the final act, there's enough within Pretty in Pink to make it worth the time. It mainly suffers in comparison to other superior films from Hughes. It maintains that classic '80s feeling that's hard to recreate and makes for an easy viewing. The music is top-notch, and the environment is populated with colorful supporting characters to enhance the main story. I didn't care whether Andie got together with Blane, and their romantic moments were the least interesting part of the movie. However, that plot sets the framework for Cryer, Potts, Spader, and others to leave their mark. It's worth checking out if you're a Hughes fan or just looking for nostalgia for a decade filled with great comedies.

On a related note, my wife noticed an interesting connection between Pretty in Pink and a poster hanging right behind our TV. For more details, check out this post from her excellent blog Lansdowne Life, where she takes on creative projects and home decorating.

Next week, I'll join Tom Hanks and Shelly Long as they wade into The Money Pit.
Film Review