Top 5 Moments from The Cabin in the Woods 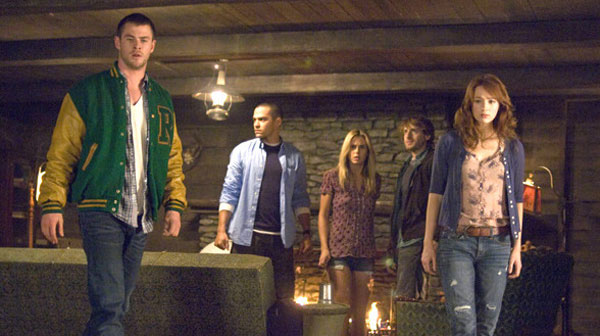 I was planning to write a full post about the excellent Drew Goddard/Joss Whedon creation The Cabin in the Woods, but it seemed unnecessary. So many bloggers have already crafted excellent articles that delve into its subversion of the horror genre. A great example is this post from James Blake Ewing of Cinema Sights, which explores the clever ways that Goddard and Whedon sidestep our expectations. Since it’s Friday, I decided instead to post my Top 5 favorite moments from this entertaining movie. Narrowing the field down to five was extremely challenging. How can you rank the scenes from a film that’s filled with in-jokes and surprises? My horror film knowledge is pretty low, so I may not be the right guy for the job. Regardless, I’ll give it my best shot. The fate of our world may depend on it. I’d love to hear about your favorite scenes, which I’m guessing will differ from mine.

WARNING!: This list contains spoilers that could ruin the movie; proceed at your own risk. 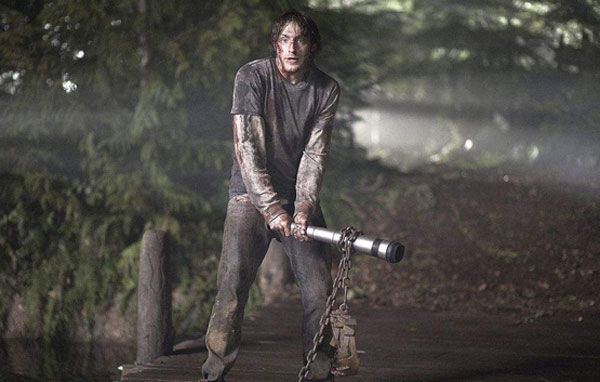 5. Marty Discovers the Camera
Pretty much everything involving Fran Kranz’s stoner Marty is great, so you could pick a variety of scenes that fit this spot (including the one from this picture). My favorite is his discovery of a miniature camera inside the lamp in his room. Since his drugs counteract the effects of the scientists’ mind-influencing substances, he sees a bit more clearly than the rest, which isn’t saying too much. His bemused expression as he inspects the camera is classic. Finding the clue puts a huge target on Marty, so he’s likely mincemeat for the redneck zombies. You know his time is up, though Whedon and Goddard show they’re not ready to kill such an entertaining figure this early. Marty is pegged as “The Fool” for this sacrifice, but he ends up being the most perceptive character. Franz stole nearly every scene as Topher in Dollhouse, and he fits perfectly with Whedon's voice. 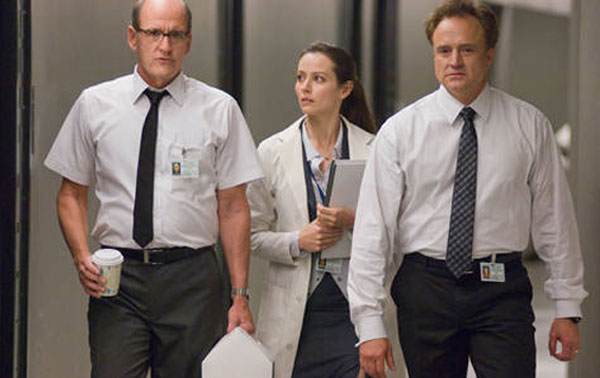 4. The Merman
Throughout the movie, there are several jokes about Hadley’s (Bradley Whitford) hopes that the victims will summon the merman. He puts his money on that fact and loses, and it’s not the first time it’s happened. When all hell breaks loose in the end, the merman enacts his revenge and crawls in the control room to chow down on Hadley. Whitford’s reaction is priceless and generates one of the biggest laughs in the movie. Watching the merman crawl across the decimated control room is a great image because it’s such a ludicrous moment. Whitford is the right choice for this character and brings his signature style to the fast-talking Hadley. His smarmy character finds a way to channel his work in The West Wing and Studio 60 while adding a layer of callous indifference to the formula.

3. The Speaker Phone Conversation
If any scene epitomizes Whedon’s sense of humor, it’s the speaker-phone conversation between the scientists and Mordecai (Tim De Zarn), the stereotypical gas station attendant. He calls them with ominous threats about the world's end but quickly changes his tune when he realizes he’s on speaker phone. Mordecai warned the victims about their danger at the start of the story, but they didn’t listen. He’s a standard horror film character, and this scene reveals that he’s really just a goofy actor playing that role. The moment goes on for a while and adds little to the plot, but it’s a silly respite from the grislier action at the cabin. It subverts a genre standard but does it for humor and isn't just a clever device. 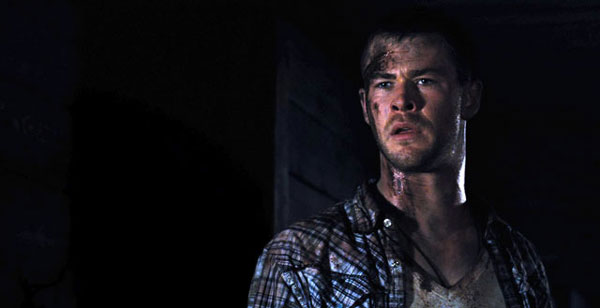 2. The Motorcycle Jump
Like most good horror movies, the victims seem to have a chance to escape in the middle act. Curt (Chris Hemsworth) is all set to make a courageous motorcycle jump to save the day. He gives a rousing little speech and performs the daring leap across a chasm. Success would be way too easy, however. The invisible force field is revealed early, but we’ve forgotten completely by this point. Curt’s deadly crash into the barrier is a wonderful gag and shows how deftly we’re being manipulated. The impact is even stronger because of the confident build-up, and both the scientists and the filmmakers prove who’s in control. It’s also a really funny moment that perfectly epitomizes the movie’s overall tone. Even though Curt has been programmed to be the "jock" and isn't that way normally, there's also a certain glee in watching a guy who thinks he's the hero get rejected in such a grand fashion. 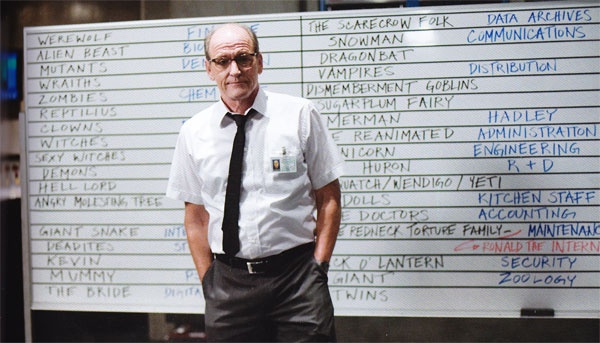 1. Release the Monsters!
During its first hour, The Cabin in the Woods plays out like a fun subversion on the genre, but it’s not clear where it can still go. When Marty and Dana (Kristin Connolly) step into the elevator, I figured they were heading for a big explanation from the scientists. Instead, they uncover basically every type of monster from the history of horror films. The wide shot with all of them is impressive, but it goes to another level when Marty and Dana release them all. The ensuing chaos is totally insane and ranks as one of the great “oh shit!” moments of recent years. Words can’t do justice to all the mayhem that ensues. A highlight involves a Unicorn skewering a helpless grunt with his horn. Earlier in the movie, all the monsters were presented on the scientists’ betting board, and just the inclusion of the Unicorn on that list was a clever touch. I had no idea this was just a set-up for a classic gag later in the film.

What were your favorite moments from The Cabin in the Woods?

Next week, I'll close out the Here Come the Aliens! marathon by watching the original television miniseries of V, starring the great Marc Singer and Jane Badler.