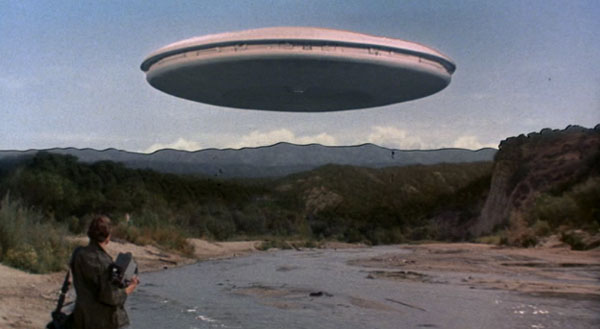 Although the regular marathons usually just include movies, I’m hoping to post more in the future about TV shows that I missed during their first run. The alien-invasion topic gave me the opportunity to check out a huge sci-fi miniseries from the '80s. I was only six years old when V premiered in 1983 and was a bit too young for it. The big-budget production was a huge hit for NBC and drew more than 40 million viewers on its opening night. I have vague memories about the hype, which focused on the aliens and their love of eating rodents. Beyond that small element and Beastmaster Marc Singer being involved, I pretty much entered this show cold. Would it live up to the hype and warrant the more than hours of running time? Let’s check out the questions before I get converted by the fascist aliens!

What's this story about?
Our world changes forever with the arrival of the Visitors in mother ships. They seem friendly and human, but this familiar form hides a nasty enemy. The reptilian aliens have nefarious plans and will do anything to keep the populace from discovering them. Scientists are the primary target and are rounded up for “conversion” on the ships. Meanwhile, the Visitors mount a propaganda campaign to keep everyone subservient to their will. It’s a brilliant strategy, but individuals like investigative reporter Mike Donovan (Marc Singer) and Dr. Julie Parrish (Faye Grant) mount a resistance. Their odds of survival are slim, but the determined group has a chance if they stick together. As the casualties rise, they enact a daring mission to strike at the Visitors and discover their true plans. 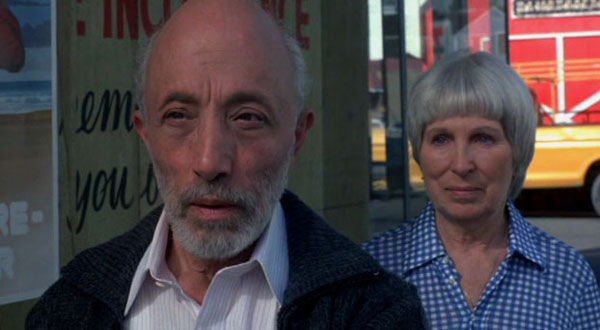 What are the key themes of this film?
This story was inspired by the 1935 Sinclair Lewis novel It Can’t Happen Here, which warned against fascism at the time of Hitler. It’s interesting to note that the original premise for V didn’t involve aliens and was a direct look at this type of regime. Sci-fi was huge at the time, so transforming the villains into aliens expanded the audience. Creator Kenneth Johnson clearly depicts the Visitors as fascist overlords who institute martial law. The fact that so many lie down and let them take over also relates to Hitler’s Germany. This connection is epitomized by the character of Abraham Bernstein (Leonardo Cimino), who lived through the Holocaust and lost his wife in a concentration camp. It’s a bit heavy-handed, but Cimino makes it work and delivers the emotions. His grandson Daniel (David Packer) works with the visitors and sells out his family. This paranoid atmosphere comes from Johnson’s original ideas and fits within the sci-fi framework. There may be aliens, but it rarely goes beyond offering a realistic look at humanity’s reaction to this opposing force. 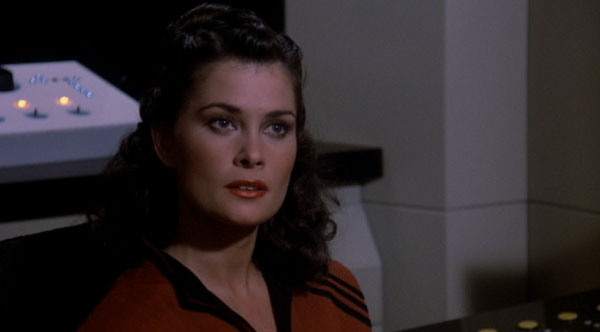 Are the aliens interesting and original?
For most of the first half, the aliens resemble humans and only vary with their mechanical-sounding voices. Diana (Jane Badler) draws the attention for her guise as an attractive woman, even if John (Richard Herd) is technically the leader. The Visitors understand what makes us tick and exploit those fears. Some people are attracted to their technology, while others like Mike Donovan's mom Eleanor (Neva Patterson) just want to be on the winning side. One reason they work is because the entire species doesn't agree with their vicious plans. Martin (Frank Ashmore) saves Mike from Diana's wrath and is part of a resistance group. We only scratch the surface of understanding the Visitors' social structure in this miniseries, but it's likely explored more in the follow-up shows. 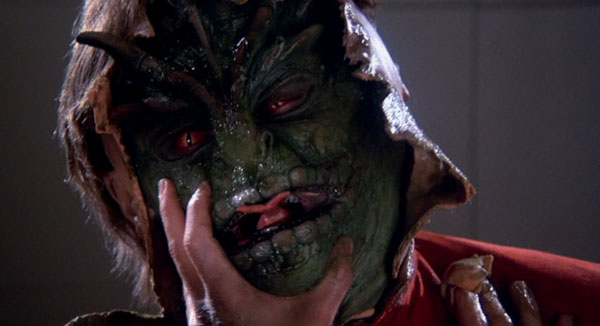 How is the creature design?
Although the alien make-up looks pretty silly, the first reveal is a shocking moment because there's been little indication they don't share human physiology. For a 1983 television production, even one with a sizable budget, the creature effects work out pretty well. We learn in the second part that they can also spit some type of acid that blinds their prey. The classic scene that people still remember involves Diana engulfing an entire guinea pig by stretching out her mouth. Words can't do justice to the surreal look of this sequence. It's obvious the face isn't Jane Badler's anymore, but it's effective if you're willing to go for it. I still remember hearing people talking about the Visitors eating mice, and that one scene has remained infamous nearly 30 years after its original appearance. 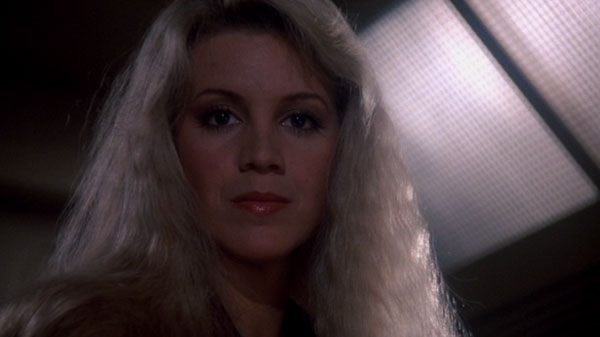 Are the characters believable and fully drawn?
The cast of V is huge, even for a four-hour miniseries. This means that Johnson must focus on a limited number of characters and then give the others limited scenes. Most actors do their best with the screen time, with a few exceptions. Singer does a nice job as the journalist who takes the breakthrough video that pushes the Visitors to crack down. Faye Grant brings weight as the leader of the resistance, even if it's not entirely clear why she's been picked to lead them. Richard Lawson also shows depth as a character who doesn't make the final credits. Less inspiring are the one-note performances from Neva Patterson, Daniel Packer, and especially Jenny Sullivan as the journalist who works with the Visitors. Finally, I have to mention a strange brief appearance that feels really out of place in this television production. Jenny Neumann shows up briefly as Barbara, an alien sympathetic to the human resistance. She helps to save Donovan and spends most of her time undressing to give him her outfit. The camera lingers enough on her to show that she's on the screen for just one reason. It stays within the boundaries of network television, but it's still pretty random for a generally safe presentation. 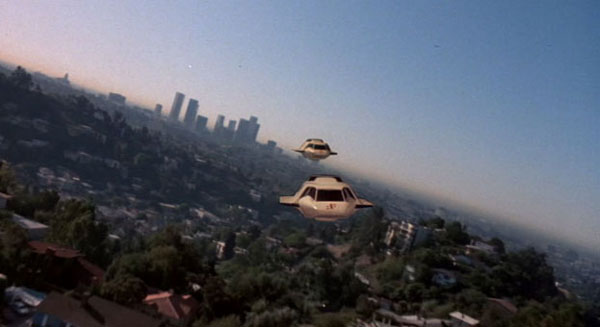 What are some of the most memorable scenes?
The opening reveal of the visitors' mother ships is excellent and shows the massive scale of their arrival. While the visual effects aren't completely believable, they don't take us out of the production. With a little suspension of disbelief, it's easy to believe the ships are hovering above the major cities of our world. There's a bit of a lull in the middle, but the final hour provides an entertaining conclusion. When Martin shows Donovan the Visitors' true plans and the stacks of bodies waiting for consumption, it's a chilling image that remains powerful today. The shootout at the armory lacks this scale and feels a bit silly, even as some humans are dying. Obviously inspired by the TIE fighter pursuit in Star Wars, the final chase (pictured above) is exciting even with the limited budget. Like much of V, it doesn't transcend its time period, but there's enough fun on screen to make it worth our time. The acting power and effects might not match the best examples from recent years, but that shouldn't discourage you from checking out this engaging miniseries.
Film Review