Here Come the Aliens! Marathon: The Man Who Fell to Earth (1976) 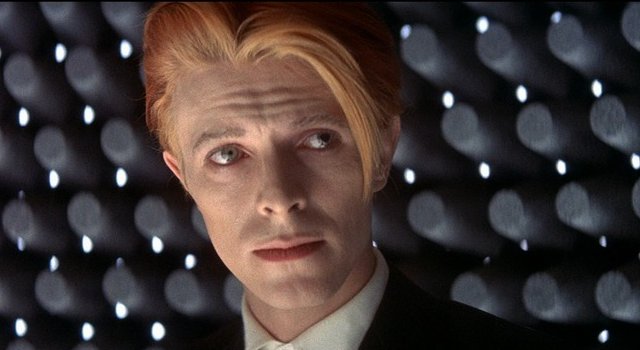 David Bowie has a unique androgynous look that he's used effectively for years to sell a cool, otherworldly image. He's appeared in a limited number of films but always provides an interesting presence. Prominent examples include Labryinth, The Prestige, Basquiat, and Twin Peaks: Fire Walk with Me. His first starring role was the title character in Nicolas Roeg's The Man Who Fell to Earth in 1976. Bowie is the perfect choice to play the mysterious guy who doesn't seem so different, at least at first. Based on the 1963 novel by Walter Tevis, this movie has a strong cult following and remains popular more than 35 years after its release.

So, what's this story about?
Thomas Jerome Newton (David Bowie) crashes on our planet and stumbles through the countryside. Armed with secrets to technology beyond our capabilities, he builds a serious amount of capital and begins his experiments. He also strikes up a relationship with Mary-Lou (Candy Clark), an elevator operator who knows he's quirky but doesn't realize he's an alien. He also hires Nathan Bryce (Rip Torn), a womanizing professor who's in need of a change. While Newton's plans start to take shape, both Mary-Lou and Bryce start realizing that this guy is a lot different than they initially expected. The government's also keeping an eye on Newton, which could bring his plans to a crashing halt.

What are the key themes of this film?
Summing up the different threads of this story  is not easy. The film begins like a standard sci-fi mystery and morphs into something entirely different. Once the government intervenes and halts Newton's plans, he's treated like a caged animal. Director Nicolas Roeg and Writer Paul Mayersberg identify Newton as the "other" who's pushed aside by the dominant forces of society. Instead of trying to understand him, they create a prison and perform invasive tests. By the end, Newton's has become an alcoholic mess. The poor treatment connects to the way our society treats anyone who's considered different, particularly other races and cultures. Although it was released in 1976, you can still connect the main themes with the immigration issue and the extremely volatile political environment today. Although Newton comes from another planet and differs from humanity, his goals aren't that different from our own. The problem lies with the power he gains, which immediately makes him a threat to the people in control.

Are the aliens interesting and original?
With a few exceptions, Newton is the only alien that we see. He drops out of the sky at the start, and we follow his story. Bowie is cast more for his look than his acting ability, but he remains intriguing because his motivations aren't clear. He uses technological advances to build major capital, though we're not sure why he's on Earth. During the first act, he lacks much emotion and is still acclimating to the new world. Another reason that Newton is engaging is Roeg's direction, which throws so much outlandish imagery at us. This energetic approach sells the idea that the world's already gone mad, and Newton's just another part of that out-of-control atmosphere. He often seems like the most sane figure in the frenetic environment, though his stability only lasts for so long.

How is the creature design?
For much of this story, Newton resembles a human with a clever sense of style. His bright red hair and attractive clothes are distinctive among drab guys like Nathan Bryce and Oliver Farnswoth (Buck Henry). We're far into the movie before Newton shows us his true form, and the change mostly comes from the eyes. Roeg pushes the sexuality of this being, who charms Mary-Lou and seems anatomically compatible with her. That beauty is what separates Newton from most humans, who seem ugly in physical and ethical terms. The shots of his home planet aren't as successful and nearly become a parody. They appear infrequently and remind us of his origins, even if the events depicted aren't clear.

Are the characters believable and fully drawn?
Newton dominates this story, so it's difficult for other characters to make a major impression. The closest is Candy Clark as Mary-Lou, a girl who doesn't seem too smart but makes a connection with him. It's not clear how much he cares for her, but she sticks around for a while. The villains aren't memorable, which creates the feeling that the entire populace is conspiring against Newton. Rip Torn is more subdued than his typical performance, but he isn't given much to do. Bryce plays a key role in unraveling Newton's plans, but it's never clear why he acts against him. Bernie Casey gets an even slimmer role as Peters, a businessman who strikes at his competitor. By giving these characters such a limited scope, Roeg pushes the story more towards an allegory than a complete narrative.

What are some of the most memorable scenes?
There's so much happening on the screen during this film that's it difficult to nail down a few scenes. Newton's dream sequences are some of the most creative and envelop you even as you're not sure what's happening. It feels like the events might be taking place, but the cross-cutting with Newton on a bed throws us in disarray. Another over-the-top scene is a sex scene after Mary-Lou arrives at his prison. Firing blanks from a gun and sneering maniacally, Bowie brings a new level of craziness. He was apparently drugged out during much of the production, which actually works for playing the alien. Like much of The Man Who Fell to Earth, it's a memorable sequence because Roeg and Bowie seem out of control. I enjoyed their huge ambitions, but the experiments are so great that they risk losing the audience. The fact that we stick it out until the end is due to the charismatic star and the offbeat nature of the entire production. It's not a complete success and has its dry spells, but there's enough here to make it worth a recommendation.
Film Review