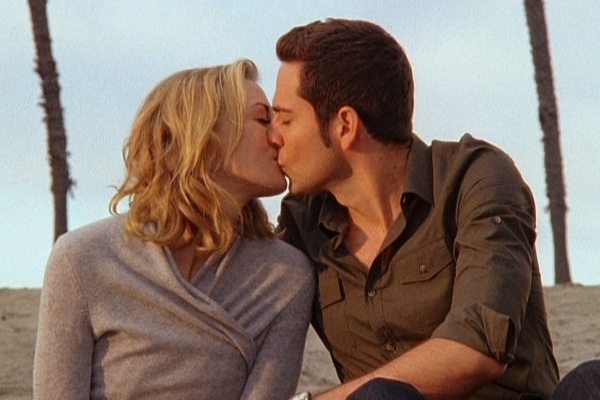 After five seasons and 90 episodes, Chuck has finally reached its closing act, and the show’s primary relationship is still up in the air. Chuck Bartowski and Sarah Walker have encountered many ups and downs over the years, and their ultimate happiness is well-deserved. It’s too bad that it’s not that simple. Sarah’s still trying to recover her memories, which include the feelings that grew for Chuck. This emotional undercurrent of her search drives the finale, even when their last mission (the third one!) gets rolling. Chuck convinces Sarah to let him tag along with her to find the evil Nicolas Quinn (Angus Macfayden), but her approach is cold and clinical. A happy ending should be inevitable for the couple, but the spy world again interferes to keep them apart.

Before discussing the end, there are plenty of other great moments to spotlight while the entire team tries to stop Quinn. With Morgan helping out from the van, Chuck and Sarah track Quinn’s attempts to buy “The Key” to unlocking the Intersect. It’s a wonderful touch to have the duo keep arriving at locations that hearken back to their early seasons. A Mexican restaurant resembles the site of their first date, and they even arrive at a German franchise of Wienerlicious, where Sarah first worked in California. Chuck’s reactions to all these coincidences are priceless, and Zachary Levi plays the comedy just right. The clever move of having Sarah rearrange the cups at the Wienerlicious is also a nice touch. The stakes for this mission are extremely high, but it still gives Chuck and Sarah an opportunity to relive their romance.

Co-creator Chris Fedak’s script provides a clear reminder of why fans have adored Chuck during the past five years. All the main characters get their moment to shine, and past baddies like the Ring and Fulcrum even get a mention. The showdown with Quinn culminates at a concert hall, which sets up one of the episode’s most inspired comic moments. One word: Jeffster. Their performance of “Take on Me” saves the day and works so well because the band hadn’t appeared much lately. Involving Jeff and Lester has felt like a stretch at times, but Scott Krinsky and Vik Sahay shine during their last time on stage. It’s a ridiculous moment but again reveals the goofball charm that’s driven the show since the beginning.

Another callback to the first season is Chuck’s bumbling attempts to help the real spies catch the bad guy. This different Sarah doesn’t respect his abilities, especially when he refuses to fire his weapon. While trying to do the right thing, Chuck ends up stalling the mission in the grandest fashion imaginable. Beyond the comedy, this scene gives Levi another great opportunity to show his emotional range. Each subsequent example slowly wears down Sarah’s defenses, which feels like a sped-up version of the opening year. Yvonne Strahovski has the tricky role of reverting back to a nearly emotionless Sarah, and she never hits a wrong note. Her character hasn’t received as much to do this season, but the past few episodes have gone a long way to fixing that issue. They remind us that Chuck is truly about Chuck AND Sarah (plus Casey, Morgan, Ellie, and the others), and her final destination is just as important.

The final 10 minutes of “Chuck Versus the Goodbye” send off each character on just the right note. Ellie and Awesome are off to Chicago with Clara, and even Linda Hamilton’s Mary Bartowski gets one last appearance. Morgan and Alex are taking the next step and moving in together, and Jeffster is poised for stardom in Germany. Even the long-running endorser Subway gets one last plug from Big Mike as they’re set to purchase the Buy More. The emotional impact of each final scene shows how lovably effective this entire group has been during the five-year run. Adam Baldwin is so good as Casey, and leaving him will be just as tough as Chuck and Sarah. Fedak and co-creator Josh Schwartz realize that the characters drive this show, and the devoted fans deserve one last exit for each one.

This brings us to the final scene on the beach, where Chuck tells Sarah the story of the entire series. Played over a tear-inducing montage, this sequence offers the perfect reminder of the great times from the past five seasons. Viewing the series as one big story told by Chuck to his lost love is a stroke of genius. It’s possible some fans won’t enjoy the slightly ambiguous ending, which fails to reveal if Sarah regains her memories. This doesn’t really matter in the end. Having Sarah utter the final lines “Chuck? Kiss me” and pulling away from their moment is just perfect. Regardless of whether Sarah remembers the past or starts over, this couple has found happiness. It’s a surprising move to leave it open-ended, but it works much better than a more obvious ending. The emotions are just right and wonderfully send Chuck and Sarah into a bright future.
TV Review