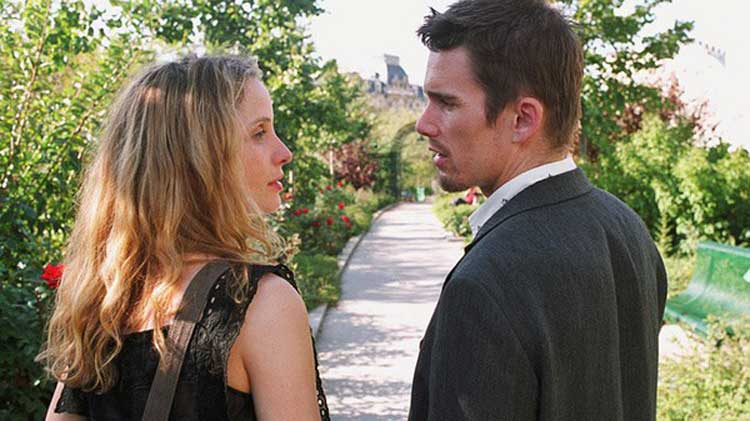 Inspired by the dialogue in Steven Soderbergh's The Girlfriend Experience, I've decided to chose some of my favorite films that rely more on conversations than explosions. These might be considered boring or slow in some circles, but I find them consistently rewarding on repeat viewings. The tricky part in making this list was not simply populating it with movies from the same director like Richard Linklater or Woody Allen. I've restricted each of those guys to one choice, though I did cheat and place one more as an honorable mention. I should also mention that I've yet to see My Dinner with Andre, an obvious candidate for this list. This was one of the easier Top 5 lists to put together, so I'm curious to hear what you think about it. Without any further unnecessary dialogue, let's get to the picks! 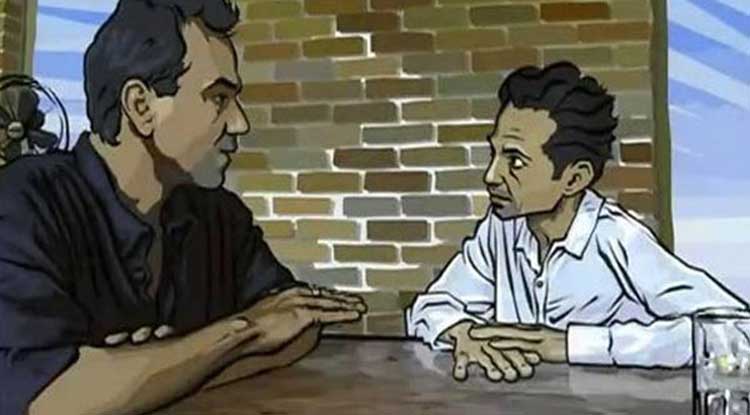 Honorable mention: Waking Life (2001)
Shot in live action and then animated using a clever rotoscoping technique, Richard Linklater's Waking Life is a stunning film. Along with the impressive visual style, it presents a diverse group of thinkers discussing weighty topics of life, death, and beyond. Another great Linklater option for this spot was the intriguing early indie Slacker, but the entrancing quality of this movie gave it a slight edge. Wiley Wiggins stars as a young man having strange encounters with various characters while questioning his lace in this strange dream world. The heavy topics could easily feel pretentious in lesser hands, but Linklater maintains a light enough tone (aided by the animation) to make the experiment an intriguing success. 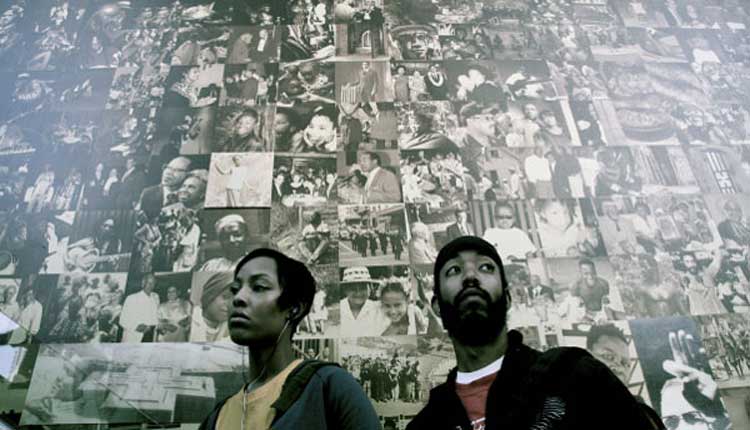 5. Medicine for Melancholy (2008)
This charming indie romance from Barry Jenkins presents an eventful day for Micah (Wyatt Cenac) and Jo (Tracey Higgins) following a one-night stand. They stroll around the attractive streets of San Francisco and discuss race, politics, and relationships in the process. In a short period of time, Jenkins create two fully fledged people who are intelligent and have vastly different viewpoints. Cenac and Higgins are both excellent in this unconventional love story that never feels like an experiment. Supported by a great soundtrack, this remarkable film is one of my big surprises from the past few years. 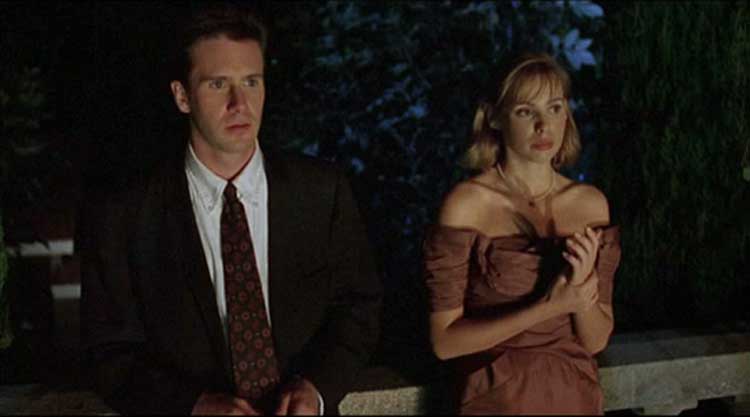 4. Kicking and Screaming (1995)
I can't rave enough about Noah Baumbach's (Greenberg) debut film, which shows a group of intellectuals struggling to find their way after graduation. More of a series of interludes than a straightforward story, this consistently funny movie includes a top-notch young cast that sell Baumbach's dry sense of humor. The best is the great Chris Eigeman as Max, the most cynical of the bunch, who still manages to find love in an unexpected way. I graduated from college in 1998, so it's possible this strikes closer to home for me than younger viewers. Regardless, it's worth your time to check this out, even if you haven't enjoyed recent Baumbach films like Margot at the Wedding that had a rougher edge to them.

3. Metropolitan (1990)
Along with having the quote that led to this blog's title, Whit Stillman's debut film offers a clever look at witty yuppies, or the UHB (Urban Haute Bourgeoisie) if you will. His style isn't for everyone but can be charming if you're willing to accept his characters' mannerisms. Metropolitan holds up best of his three films (not counting the upcoming Damsels in Distress) and is surprisingly well-designed for a debut. The story's told from the perspective of the outsider Tom (Edward Clements) entering the world of "deb" parties. He's on the same page intellectually, though, and catches the eye of Audrey Rouget (Carolyn Farina). This set-up provides the backdrop for some great dialogue, particularly from Chris Eigeman (again) and Taylor Nichols, who excel at this type of material. 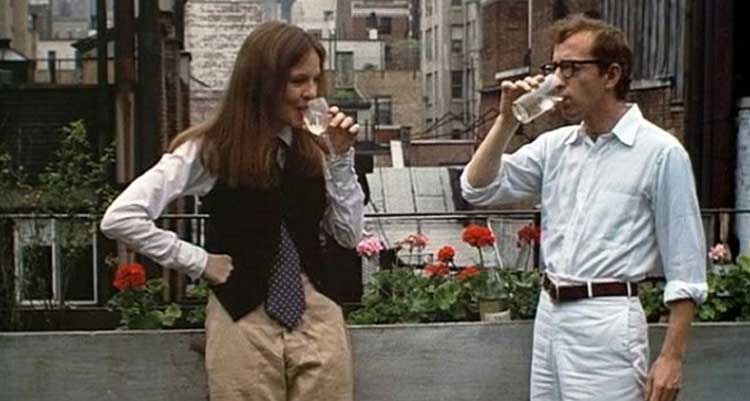 2. Annie Hall (1977)
What more can I say about this classic Woody Allen film? I do feel that it's starting to get the "Citizen Kane treatment" where the hype is so high that it's guaranteed to disappoint new viewers. That said, the story of Allen's Alvy Singer and his romance with Diane Keaton's title character remains a remarkable film. It provides an excellent structure, clever dialogue, and plenty of stand-out moments. My favorite scene involves a cameo from Marshall McLuhan, who appears to scold a snobby guy in a theater line. This is just one of many great scenes in my favorite Allen film. 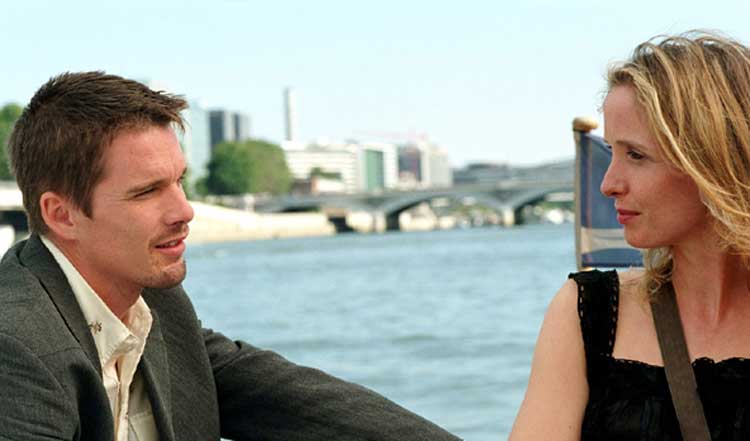 1. Before Sunset (2004)
The quintessential conversation movie, this charming and intelligent Linklater sequel was a no-brainer for the top of this list. I could easily place Before Sunrise in this spot, but its follow-up speaks to me today because  of the issues faced by Celine and Jesse. They're struggling to figure out what it means to be an adult while trying to rediscover their romantic idealism. Does that spark still exist nine years after their first encounter? It's clear from the start that it remains, but it's not your typical courtship. They bond over words and ideas, which makes this wonderful film the perfect pick for the top spot.
Top 5 Lists