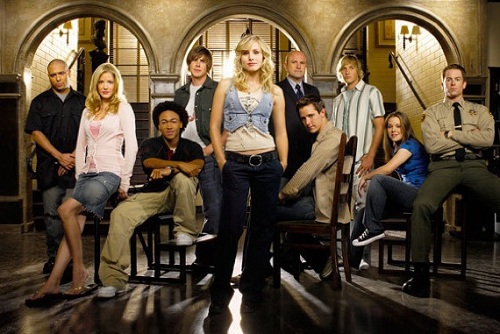 This week, I made a guest appearance on the Televerse, the great TV podcast hosted by Kate Kulzick and Simon Howell. Our DVD Shelf topic was Veronica Mars, the excellent teenage detective series that starred Kristen Bell and Enrico Colantoni. It aired for three seasons on UPN and the CW and built a cult following due to its fun combination of film noir and high school drama. Set in the fictional town of Neptune, California, it uses a serialized format to present intricate season-long mysteries (for the first two years). If you haven't seen it, this show deserves to be at the top of your must-see list.

The Televerse is a fairly new podcast where Kate and Simon review many of the current TV shows airing during that week. They've recorded 12 episodes so far and cover a nice balance of comedies and dramas from both broadcast and cable networks. It's definitely worth a listen if you're a TV fan with a DVR full of the latest shows. The weekly DVD Shelf spotlights a bygone series that's deserves more acclaim and might have slipped through the cracks for some viewers. Check out this episode and let me know what you think!
podcast The Televerse