When Am I? Marathon: The Time Traveler's Wife (Robert Schwentke) 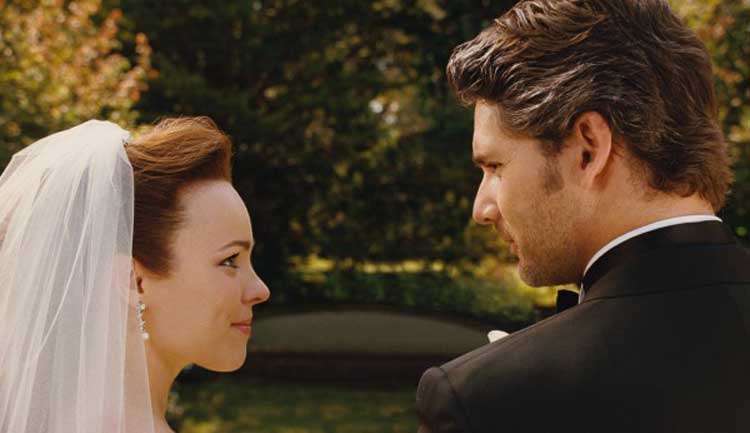 I hadn't really considered seeing The Time Traveler's Wife for several reasons. First of all, it was dismissed by most critics with either average or negative reviews. Also, I knew the novel was a major hit, but it seemed more like a mainstream romance than a sci-fi film. Largely due to the recommendation of my wife Erin (check out her great blog!), I decided to give it a chance during this time-travel marathon. Let's get to the questions before I find myself in a new place without my clothes!

Henry DeTemble (Eric Bana) is a time traveler who jumps around his life in disjointed fashion and always arrives without his clothes. This can be tricky, especially when it's cold outside. His leaps usually lead to Claire Abshire (Rachel MacAdams), who's mysteriously connected with his destiny. Henry first meets her as a young girl, and they eventually connect as adults and get married. Life with a time traveler is not always easy, and their relationship goes through some peaks and valleys. When hints arise about a sad future event, Henry looks for a way to avoid this unfortunate fate.

Henry doesn't need to hop in a Delorean or telephone booth to travel through time. He simply fades away and appears in another time period. The explanation for his ability is a genetic defect, and his father doesn't share this gift. It's not clear if there are others like him in the world, and Henry doesn't appear concerned with searching for them. The time travel plays an important role but is really a backdrop for the love story between Henry and Claire. The toughest part about the time travel is that it can take over at any time. He even disappears right before his wedding, which is quite a downside of his gift. Henry also must steal clothes after each jump, so that's not always an easy task. Of course, even if he's arrested for theft, he'll likely disappear anyway.

Henry and Claire are likable characters and live in an idealized world of true love and beautiful meadows. This is definitely not the same territory as The Butterfly Effect. I wouldn't mind spending time with them, even if his habit of disappearing at random times would become difficult. What if he was my ride home? Their best friends Charisse (Jane McLean) and Gomez (Ron Livingston) also seem nice and are surprisingly accepting of Henry's talents. The one exception is Claire's father Phillip (Philip Craig), a hunter and Republican who seems like a big idiot. Craig's also the only actor who chews scenery to take advantage of his brief appearance. That's rarely a good idea, especially in this understated, generally positive world. 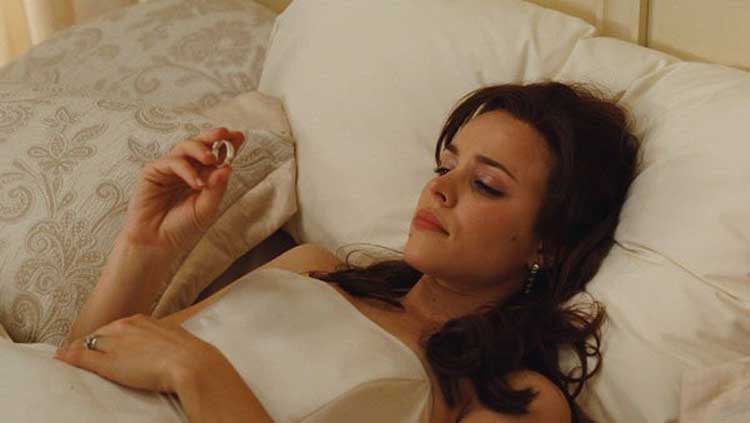 Nearly everything is shot with bright, colorful images that sell the enchantment. In most instances, it works pretty well. One example is the wedding scene, which seems primed for disaster but ends up being sweet thanks to some help from a future Henry. Of course, this happiness is undercut when he disappears on their wedding night. This couple has no luck! Another good moment is their first meeting as adults, where she obviously loves the guy but he doesn't know who she is. Henry is confused, but how can he resist such an attractive girl? There's not much silliness in this movie, but we do get one goofy scene with Henry fighting off a band of hoodlums after putting on women's clothes. I expect he can't be picky with his outfits, but these close-minded guys don't get it.

Unlike many time-travel films, this one doesn't spend much time explaining the specific time of each jump. Henry's leaping within Claire's lifetime, so it's typically from the early '80s to the present. The story takes place among the classic architecture and subways of Chicago, so those wouldn't change as much as some newer cities. Our main way to tell his age is the length of his hair, which shifts between near-mullet status and cleaner short hair. The latest versions of Henry also have some gray hair, but the rest of him looks the same. It is odd to see Bana say lines like "I look older to you" when the changes are so minor. The lack of focus on the details of the time travel fits with the overall approach from Director Robert Schwentke (Flightplan) and Writer Bruce Joel Rubin (Ghost). It's no coincidence that Rubin wrote Ghost, which also uses the supernatural elements as a backdrop for the love story. 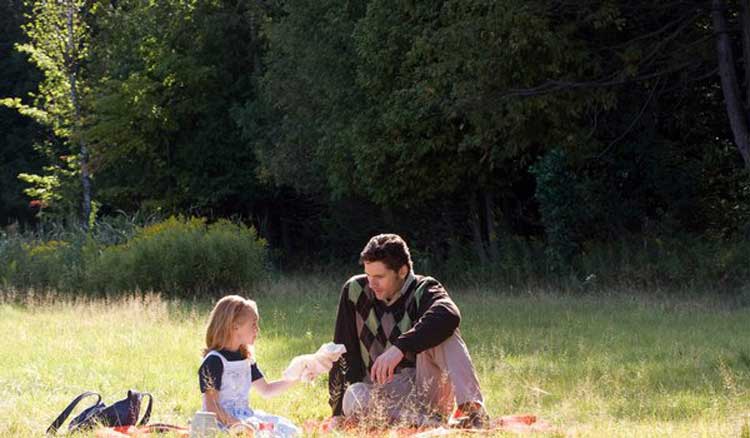 As I've stated in earlier posts from this marathon, I'm willing to take the leap and accept some plot holes if the material is well-done. That's generally the case with this film, but I do have some questions about the logistics of the time travel. First of all, Henry and Clare meet when he arrives in the bushes while she's playing in her giant backyard. He already knows her at that point from their adult connection, but it's a first for her. This leads her to strike up their relationship as an adult when they meet at the library. So it's a circular pattern without a clear entry point.

How did it all start? My guess is that we're supposed to accept their connection as fate or driven by a supernatural force, but it's hard to turn off the brain completely. Later on, we learn that it might be possible for someone to control the time travel. Was his subconscious mind driving the leaps without his knowledge? Also, I wonder how Clare keeps the different versions of him straight. At one point, she's purposefully cheating on her husband with another version of him. I doubt the characters would read it that way, but it becomes a difficult proposition.

The Time Traveler's Wife is a suitable piece of mainstream cinema with likable characters, attractive cinematography, and an interesting premise. It takes a few chances but never goes much beyond offering a nice love story. Cynics shouldn't bother to check out this movie. When my brain started shifting into that mode, I forced myself to stay focused and just roll with it. The end result is mildly forgettable but still provides a pleasant experience.