Throughout its storied history, the Star Trek franchise has made frequent use of time travel in both its movies and television series. The most prominent example is Star Trek IV: The Voyage Home, which sends the original Enterprise crew back to 1980s San Francisco to capture two humpback whales. In that case, the device is used for comedy, which leads to one of the most popular Star Trek movies. A less successful attempt is Star Trek: Generations and its meeting of the two great captains, Kirk (William Shatner) and Picard (Patrick Stewart). That use of time travel had great promise but ended up providing a clunky resolution to Kirk's story. Finally, Star Trek: First Contact sends the Next Generation (TNG) crew back in time for an action-packed battle with the Borg. This conflict meshed nicely with the story of Zefram Cochrane (James Cromwell) and the first meeting between Earth and an alien race. It's easily the best TNG movie and avoids the sloppy pratfalls of its predecessor.

The five television incarnations of Star Trek have delivered many seasons of entertainment and head-scratching science. For novices, the Fan Collective DVD release on Time Travel is a good primer for some of the best episodes. I reviewed this set back in 2006, and it was fun to finally catch up with some classic shows. The highlight is "The City on the Edge of Forever" from the original series. That episode introduces the tragic side of going back in time when you're unable to change someone's fate. Another good example is the TNG episode "Yesterday's Enterprise," which sends the Enterprise gang into an alternate timeline with a mostly different crew. This is another case where tough choices are needed to escape the obstacles of time travel.

This brings us to J.J. Abrams' 2009 reboot of Star Trek, an action-packed attempt to bring the series to a mass audience. Amazingly, the approach works and delivers an entertaining ride from start to finish. It's not a perfect movie and has some flaws, but the story remains accessible while retaining the feel of the franchise. One of the key elements is the use of time travel, which accomplishes several important feats for this new version. First of all, it allows Abrams to present an origin story that fits within the original time line. Because Romulans from the future have altered the past, this is not just a different approach to the same material. Screenwriters Alex Kurtzman and Roberto Orci can show a different Kirk and Spock without hearing incessant complaints about continuity. 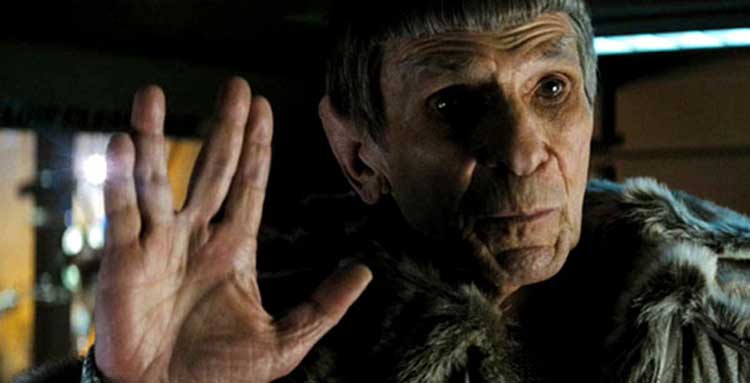 The other major benefit of using time travel is the chance to bring back Leonard Nimoy as Spock 18 years after his last appearance in Star Trek VI: The Undiscovered Country. His appearance is more than a cameo and plays a major role in the story's key events. In essence, Nimoy brings relevance to Abrams' film just by appearing on screen. He's giving his stamp of approval to the new version and proclaiming that it's more than just a studio money grab. The 80-year-old Nimoy has largely stepped away from acting, so his appearance is a rare achievement. He brings emotional weight to Spock's journey and does more than simply wink at the camera. It shows his underrated talents with this character and really helps the film. Nimoy also appeared briefly on Fringe as William Bell, and he brought the same weight to those scenes.

Amazingly, Star Trek involves time travel, wormholes, and red matter, yet it still finds a way to provide entertainment to mainstream audiences. The main reason it works is the relationship between Kirk and Spock, which often set the foundation for the best moments in the original series. Chris Pine and Zachary Quinto create their own versions of Kirk and Spock without doing impressions of the famous duo. Neither winks at the camera, which makes this more than just a light-hearted throwback to a beloved franchise.

This focus on characters serves Abrams well, and I hope the sequel continues this trend. Don't get me wrong; the visual effects are top-notch. Watching the Enterprise glide through the wreckage of a nasty space battle is breathtaking, especially on the big screen. Finding a way to combine high concepts and classic entertainment is no easy task, which makes Star Trek a remarkable achievement.