Back to the Future Review (Robert Zemeckis) 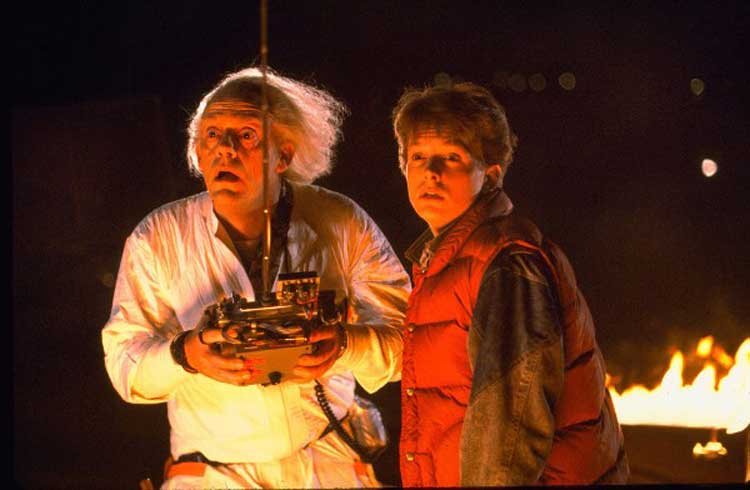 This week, I'm taking a look at several movies that involve fun devices for traveling through time. This gives me a perfect chance to revisit Back to the Future. It still frequently appears on TV, but I hadn't sat down and watched the entire movie in a long time. Now the proud owner of the trilogy on Blu-ray, I was ready to travel back to 1955 to hang with Marty, Doc, and the gang. I don't see the point of doing a straight-up review of a movie that's so well known. Instead, I'm going to give my observations about specific parts of the story, including the time travel itself.

Watching the extras from the Blu-ray release, it's clear that Back to the Future could easily have gone off the rails. It's common knowledge that Eric Stoltz was originally cast as Marty McFly, and I can't imagine him in that part. He's an accomplished actor in the right role, but his sense of humor is so different from Michael J. Fox's. I was surprised to learn of a different way for Marty to return to 1985. An original idea had him traveling to a nuclear test facility in the desert to use that explosive power. It was changed due to expense, and the choice to use the lightning strike in town was almost certainly a better move. Watching Doc Brown (Christopher Lloyd) scramble to keep his crude contraption in play while Marty struggles to exist is a great example of cross-cutting. The end result is suspenseful and full of excitement while keeping us within the setting of the rest of the movie. 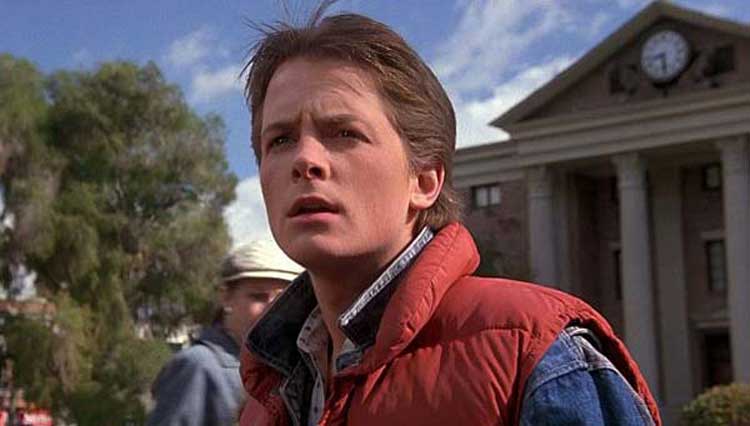 Looking at the time travel itself, the actual method is silly but not crazier than what we see in many films. The Delorean is one of the classic examples of a time machine, and it also is a pretty cool ride. It does seem like Doc might consider putting some back-up power sources inside the car, but he is a bit crazy. Stealing plutonium from Libyan terrorists doesn't seem like the best way to secure a long life. Also, if Doc was a better planner, there would be no movie. A note to time travelers: If you're heading into the past, be sure to bring a picture of yourself. That might help if you start changing the future. Marty does seem very sloppy with everything, not just when dealing with his parents. Who knows what effect he had on the driver of the manure truck? Did the owner of the diner take his idea for Pepsi Free? Along that line, Marty seems to have inspired Chuck Berry and possibly invented the skateboard. That's quite a successful run for such a bumbling time traveler.

Another interesting element is Marty and Doc's plan to get Lorraine (Lea Thompson) and George (Crispin Glover) together at the dance. Basically, he's going to put the moves on his mom and go over the line, giving George the chance to save the day. This is a terrible idea. I know they're desperate, but will this really put the future back to normal? If George punched out Marty, we can be sure that Lorraine wouldn't be ready to name their kid Marty. It'd be like calling him Biff. They're super lucky that Biff (Thomas F. Wilson) arrives and pretty much tries to rape Lorraine. He's really the guy who saves the timeline, in a creepy way. I'm relieved that we didn't have to see Michael J. Fox trying to pull off that scene. That would be a scarring moment, especially for nine-year-old Dan in the theaters. 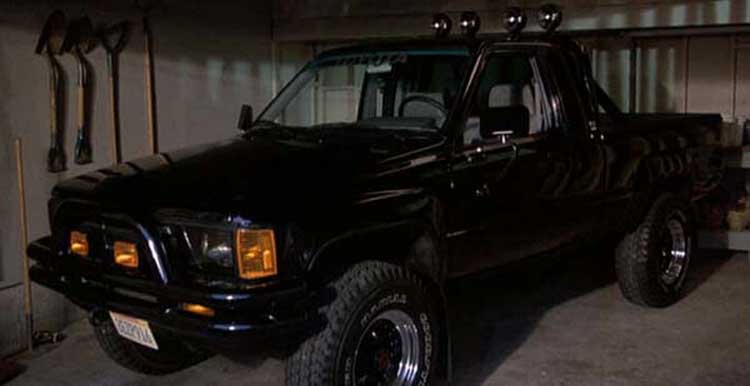 Finally, let's take a look at the closing sequence back in 1985. Marty wakes up at his house and strolls into the living room to meet his deadbeat family. But everything's changed! They're rich and dress like yuppies. First of all, would his brother and sister still live at home? It seems like his brother has a great job, so he might want a bit more living space. Also, this might be skewed by my personal feelings about big trucks, but Marty doesn't seem like the kind of guy who would want that type of vehicle. I know it might impress Claudia Wells' original Jennifer (not that fake Elizabeth Shue), but he's a rocker who skateboards, right? I guess that even Marty can't be immune to the excesses of the 1980s.

While much of this post has nitpicked at the silly parts of Back to the Future's plot, it's still an excellent film. Unlike its sequels, which I'll have to cover in the future, it's a precise movie that doesn't waste time on excessive plot strands. Robert Zemeckis and Bob Gale deserve major credit for keeping the story lean and focused, which allows the humor to really shine through. I should also mention Alan Silvestri's score, which plays a key role in keeping the energy high. It does seem overplayed at certain points, but that feeling comes more from the sequels than the original movie. Providing great fun and plenty of memorable scenes, the original remains a time-travel classic more than 25 years after its initial release.
Film Review