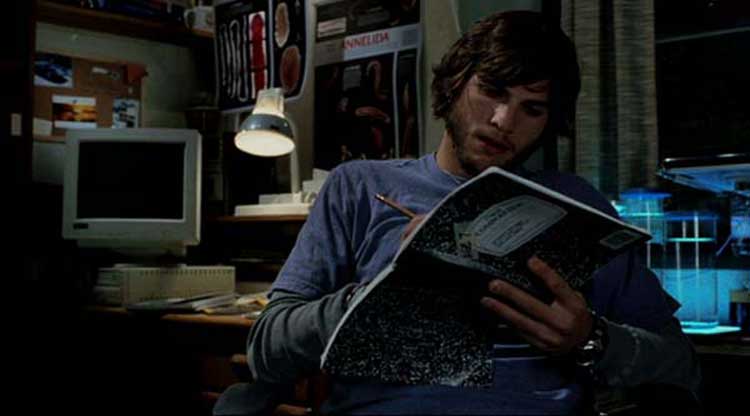 After checking out the time-travel plot of The Girl Who Leapt Through Time, I decided to explore another film that shows how messing with the past can harm the future. In this case, the changes are a lot more blatant and wreak major havoc in everyone’s lives. Loosely drawing from Chaos Theory, The Butterfly Effect reveals the darker side of time travel. Ashton Kutcher stars as Evan, a guy whose life has been filled with death and sadness. His dad has gone crazy and eventually dies, and his friends have faced their own difficulties. The group accidentally killed a baby with an explosive prank, and one of them turned into a psychopath. His childhood crush Kayleigh (Amy Smart) grew up with an abusive father, and her brother is the crazy kid I just mentioned. This is not your typical happy childhood.

This was my first time watching this film, and its opening act is jarring and confusing. Evan suffers from unexplained blackouts and doesn’t remember significant periods. We join him for these leaps of time, so it’s not clear what’s happening. We return to these moments later to fill in the gaps, but the early scenes are purposely disorienting. The story follows Evan through various stages of childhood and eventually reaches college, where he rooms with his giant Goth buddy Thumper (My Name is Earl’s Ethan Suplee). His life seems like a fairly typical college kid, but then he experiences another tragedy. This causes Evan to discover an exceptional power — he can travel back in time. 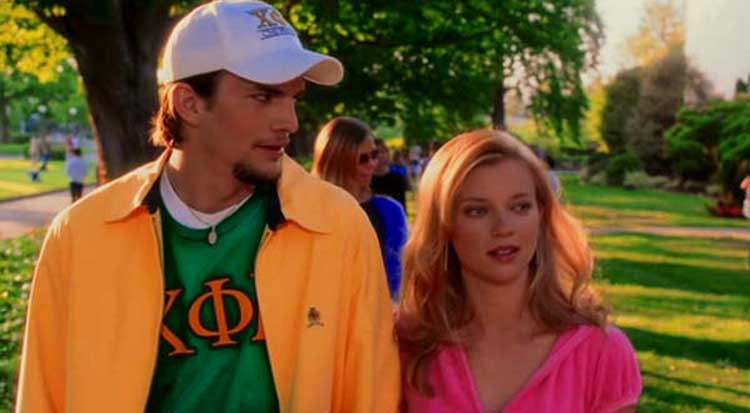 While some time-travel movies take a “what if” approach to historical events, this film covers the personal effects. Evan doesn’t actually travel physically into his past. Instead, his consciousness takes over his body as a younger man. His entry point for this journey is his childhood journals, an interesting method for reaching the past. When he reads the words, they shimmer and disappear and brutally send him back to those described moments.

The scenes when Evan takes over his younger self are some of the movie’s best and don’t always work out like expected. Even though his intentions are good, the consequences can send the characters into nastier territory. One strange example has Evan threatening Kayleigh’s father (Eric Stoltz) and changing their fates. Somehow, this change turns them into an upstanding sorority girl and frat guy, which is a fate worse than death! These are their happiest moments, so I shouldn’t complain too harshly, but it does seem like a goofy destination for a guy who started out as a more unconventional figure.

Released in 2004, The Butterfly Effect was hammered by many critics for its messy plotting, but it has some devoted fans that are intrigued by its time-travel premise. My feelings rest in the middle of this spectrum. I’m a sucker for this genre and enjoyed watching the different ways Evan screwed up his life. Another silly set-up has Evan waking up and thinking he’s improved things. Unfortunately, the camera pans back to reveal that he has no arms. Of all the luck!

Other scenarios make Kayleigh a drug addict and send Evan into a brutal prison. There are very few positive results from his meddling with the time line. I wasn’t as engaged with the characters themselves, who are constantly changing. The relationship between Evan and Kayleigh isn’t given time to develop beyond their childhood connection. Kutcher does solid work trying to make us believe in the love, but it never completely works.

Writer/Directors Eric Bress and J. Mackaye Gruber never did another movie after this one, which is surprising given its financial success. Instead, they’ve worked on the TV series Kyle XY, which incorporates their interest in sci-fi. This film has a killer premise, but it lacks the style to move beyond offering mild entertainment. The music and tone feel more in line with movies from the mid-‘90s than 2004.

I will say that I was still thinking about the time-travel aspects a few days later, so Bress and Gruber deserve credit for presenting intriguing concepts. Evan is basically choosing a specific chapter in his life and going back to craft it differently. It's like going back into a movie or book and picking a different path for the characters we love. The execution is chaotic and inconsistent, but it’s still a worth seeing if you’re interested in the genre.
Film Review