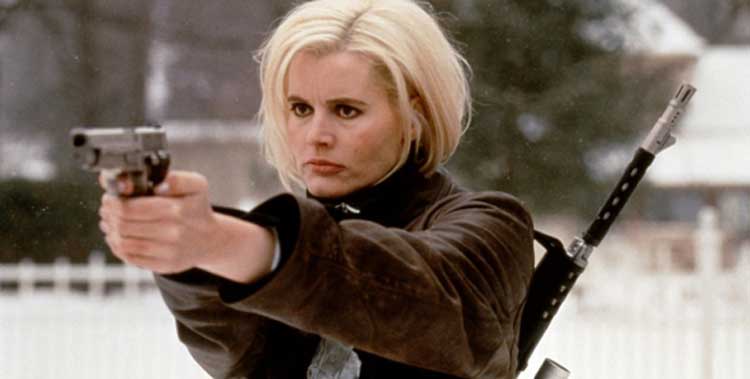 The Long Kiss Goodnight strives ambitiously to make Geena Davis the world’s greatest action hero. Let’s journey back to 1996, when a young man from Finland ruled the action world. Before discussing this movie's illustrious director, let’s start with its hotshot screenwriter, Shane Black. Bursting onto the scene as a 26-year-old with Lethal Weapon in 1987, he quickly became a highly sought commodity. It's a well-written, classic action film that made stars out of Mel Gibson and Danny Glover. Earning big money for The Last Boy Scout and The Last Action Hero, Black gained a reported $4 million for The Long Kiss Goodnight. Perhaps this price came for his skill in crafting four-word titles starting with “The L…”. Following this film, he wrote and directed Kiss Kiss Bang Bang, and that was it until recently with Iron Man 3.

Revisiting this movie, it’s surprising that any producer was willing to spend big bucks on such bad dialogue. The conversations are filled with lame one-liners that fall flat on their face. It’s like reading a script from a 12-year-old who thought he could write “cool” characters. Even the great Samuel L. Jackson can’t save lines like “when you make an assumption, you make an ass out of u and umption”. He gets off easier than Davis in the lead role and Craig Bierko as the heavy. She’s forced to utter statements like “I let you touch me, cowboy. I think I need a bath” without sounding silly, which is impossible. Bierko gives odd threats like “you’re about to have 2.4 children” while holding a knife to a woman and her kids. These lines actually sound a lot better on paper than on the screen.

Before continuing, it’s time for the obligatory plot summary in case you’ve traveled this far without seeing the movie. Davis plays Samantha Caine, a typical suburban mom with one exception — she woke up eight years ago with no idea who she was. Private Investigator Mitch Hennessy (Jackson) uncovers clues about her background, which coincide with a brutal car accident that jars her memory. Before we know it, the government’s killers are after Sam, but she’s slowly transitioning into her older self, a nasty killer named Charlie Baltimore. Her skills return just in time to save a violent death, and she joins Mitch to discover the truth. This pursuit uncovers a possible conspiracy that could lead to the death of thousands of innocent people. Cue the explosive final shootout with everything at stake.

The Long Kiss Goodnight offers a perfect example of a ridiculous, over-the-top action movie from the 1990s. In two cases, the characters must outrun a massive explosion, a device which appears repeatedly in this type of film. During another sequence, Charlie ice skates across a large pond while destroying scores of bad guys who are terrible shots. She fires with amazing precision, while these guys are completely useless. Even Mitch finds a way to shoot his way out of trouble in the unlikeliest fashion. The most interesting supporting characters (played by David Morse and Brian Cox) die quickly, so we’re stuck with Bierko’s Timothy and the feeble Leland Perkins (Patrick Malahide). These guys don’t stand a chance once Charlie cuts her hair and dies it blonde. She starts smoking cigarettes, using sex as a weapon, and belting out terrible one-liners. There’s no way they can stop her now!

This brings me to Renny Harlin, who deserves a special place in the hall of fame for over-the-top action movies. Along with this movie, he directed Die Hard 2, Cliffhanger, and Deep Blue Sea. He was married to Davis during the production of this film and the great flop Cutthroat Island, and that fact might explain his attempts to make her an action star. In this movie, Harlin shoots way too many close-ups and brings limited style to the action scenes. It takes talent to make so many shootouts look dull. We have no concept of how the participants relate to the others because of the mess of quick cuts and close-ups. He focuses way too much on Davis (understandably) and loses sight of how to film the sequence effectively.

There are times in The Long Kiss Goodnight where it feels more like a spoof than an actual movie. In a train-station sequence, innocent bystanders are gunned down crazily while the bad guys try to shoot our heroine. I can think of many approaches that would be more effective to kill her, but that would rob Harlin of the chance to try and craft a memorable sequence. Unfortunately, it’s more laughable than exciting, and the scene ends with an outlandish leap into the frozen ice.

Before I get too negative (too late), I will admit there’s a certain fun in watching such a hokey, over-the-top exercise. For all of its flaws, this movie’s off-the-cuff approach is more entertaining than a lot of duller films that take a safe route. One dream sequence has Charlie taunting Sam in the mirror and urging her to do “crazy” things like smoke a cigarette. Once that happens, you know she’ll eventually turn into a killer (doesn’t everyone?). There’s also a totally outlandish and really long final battle that keeps raising the stakes until it can only end with a stupendous explosion.

Another interesting element of The Long Kiss Goodnight is the terrorist plot, which has an eerie resemblance to conspiracy theories about 9/11. Basically, the government agents are going to kill several thousand people and blame terrorists to help the dwindling military budget. This isn’t an officially sanctioned operation, but it does involve federal officials and criminals working together. The difference becomes pretty hazy as everyone starts freely shooting at Charlie, her daughter, and Mitch. In the post-9/11 world, I’m guessing that filmmakers would make the distinctions between the government and the bombers much clearer.

Compared to the understated tone of the Bourne series (which has a similar plot), Charlie’s quick discoveries and rapid personality change feel sloppy. They fit the screenplay but don’t make us care about her situation. Even with its crazy action, the Bourne franchise made us care about the lead character and hope for his survival. In this case, Charlie is better than her pursuers, but she’s still self-centered. This changes near the end, but even that shift feels abrupt and unbelievable. Even the largest explosions only do so much if we’ve lost interest in the people on the screen.
Film Review