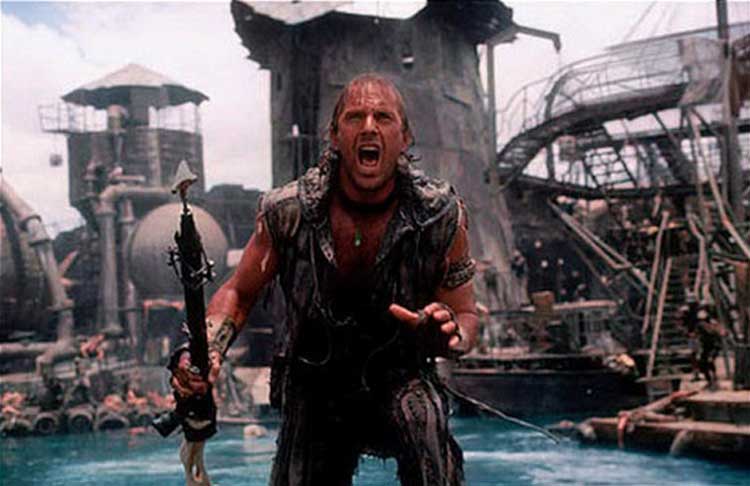 Waterworld: Sailing Further than Most Men Have Dreamed

In the current era of blockbusters with budgets over $200 million, it’s hard to remember a time when a $175 million budget was considered out of control. Let’s journey back to the olden times of 1995, when a reluctant hero named Costner was still a box-office superstar. Following multiple Oscar wins for his 1990 directorial debut Dances with Wolves, he rolled along with starring roles in Robin Hood: Prince of Thieves, JFK, and The Bodyguard. The audiences flocked to his movies in droves, but cracks were starting to appear in the armor. Costner next starred in Lawrence Kasdan's 191-minute epic Wyatt Earp in 1994, which paled in comparison to the more action-packed Tombstone from 1993. Viewers didn’t seem ready to brave three hours for the slow-moving story. His next project was primed to be his biggest movie yet — a futuristic tale set almost completely on water. What could go wrong?

Long before its July 1995 release, Waterworld earned a notorious reputation due to a spiraling budget that would eventually become the highest ever to that point. Weather problems cursed the production, which couldn't function because of the water setting. Director Kevin Reynolds and Costner clashed over the direction, which led Reynolds to walk off the set before the end of filming. It was pretty much a disaster from start to finish, according to reports from a wide array of sources. This information didn’t deter me from seeing this movie in the theaters as a 19-year-old in 1995. Similar to Titanic two years later, the press beforehand was so bad that even seeing a competent film would be a miracle. Walking out of the theater, I remember thinking that it wasn’t as bad as I expected. That’s not a ringing endorsement, and I hadn’t sat down to watch it since that time. 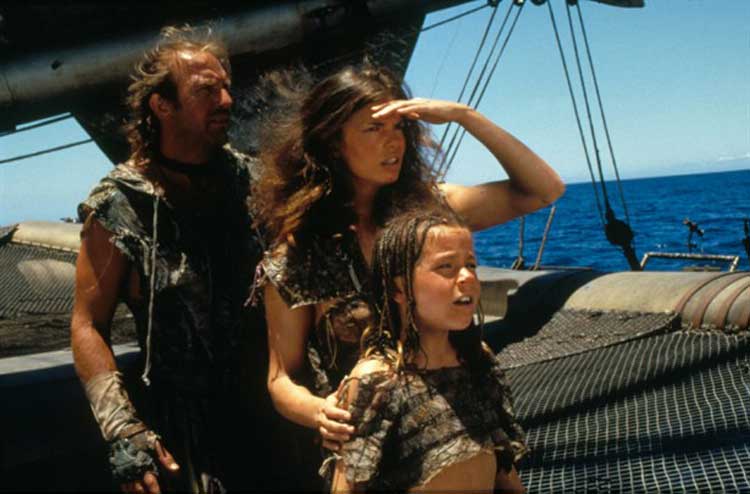 This marathon gave me the right opportunity to take another look at Costner’s post-apocalyptic journey to find dry land. He plays the Mariner, a grumpy loner with bad hair who sails his makeshift boat all over the marine wasteland. There are marauders everywhere who will do anything for the most basic of resources, including a few ounces of dirt. The uses of this dirt aren’t clear, but it’s apparently a valuable commodity. His grumpy solo world changes when two passengers join by chance. Helen (Jeanne Tripplehorn) and the young girl Enola (Tina Majorino) end up on his boat after a nasty attack. The Mariner’s not a friendly host at first, but he slowly warms up to the girls, especially Enola. Unfortunately, they’re being pursued by the evil Deacon (Dennis Hopper) and his band of villainous Smokers. A strange tattoo on Enola’s back may hold the key to finding the fabled dry land, and everyone hopes to discover this precious secret.

Waterworld is constructed to be a grand epic on the scale of classic films like Lawrence of Arabia, but something’s different right from the start. Our introduction to the Mariner shows him peeing into a bottle, which isn’t really a stirring beginning. He’s also an unapologetic jerk to everyone he meets, which makes the journey less pleasant for everyone, including us. The idea of a world where water has covered everything is pretty intriguing, but we spend way too much time with dull characters. The action is okay and includes some impressive stunts; it just never transcends the hokey material. The plot also makes little sense. Apparently Reynolds’ first cut was over three hours, and a big internal conflict involved plans to chop it down by an hour. I’m not very interested in seeing a much longer version of this movie, but the cuts did introduce strange plot holes. Another 10 minutes might have smoothed out the rough edges that mess with this movie’s flow. 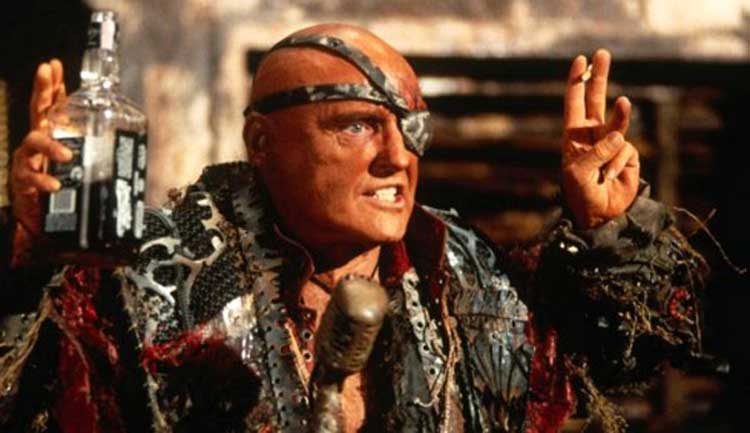 The story takes place well into the future, but there are still connections with our world. The Deacon’s band rides around in the infamous Exxon Valdez tanker and worships its driver Joseph Hazelwood. A memorable sequence has the Mariner taking Helen far underwater to see his only vision of dry land, which resembles our current cities of today. He’s able to swim down this far because he actually breathes with gills and has webbed feet. In a world full of water, these are the greatest mutations ever. Of course this makes him more of a loner from the suspicious population. Once again, Costner is playing the unique western hero, doomed to live alone but having great powers to save common humans like us. This guy is more reluctant that some of his other protagonists, but the framework is similar.

In one sense, this movie has a lot in common with George Miller's The Road Warrior, including its loner hero and the silly makeshift outfits. The rough physical stunts and motorized vehicles in the action scenes also recall Miller's classic film, but that's where the similarities end. First of all, The Road Warrior is a brisk 95 minutes and wastes no time on character development. The ambitions don't go beyond creating a white-knuckle chase film in a believable futuristic world. On the other hand, Waterworld tries to do way too much, and a lot of the ambition falls flat. I realize this contradicts my earlier comments about the cuts hurting the movie. My point is that Costner could have learned from Miller's ability to create an efficient story without leaving massive plot holes.

Revisiting Waterworld after many years, I enjoyed it less than I remembered because there are so many clunky moments. The Postman was ridiculous and over the top, but it actually was an easier viewing for me. Costner has no chemistry with Tripplehorn, which makes their connection ineffective. Hopper chews the scenery as the one-eyed Deacon, but it’s really hard to see any menace in this goofball. There are some impressive long shots of the Mariner’s ship rapidly gliding across the water. That’s just not enough to warrant another viewing of this up-and-down film. It’s not a complete disaster like many reported, but there way too many obstacles along the way to deliver consistent entertainment.
Film Review