This blog typically focuses on films, but there are rare cases where a strong television episode is worth exploring because it connects with the marathon’s theme. Battlestar Galactica (BSG) is a perfect example of a series that moves well beyond its genre and delves into some serious human issues. Its characters are three-dimensional and fascinating, and the excellent cast makes even the supporting roles memorable. Creators Ronald Moore and David Eick connect these stories thematically with our world without being heavy-handed or distracting us from the action. The result is a riveting drama that offers great rewards on repeated viewings. BSG aired its final episode about two years ago, and I've decided to focus on one of the pivotal episodes of that final season.

“Sometimes a Great Notion” begins the final 10 episodes of BSG’s run after a seven-month hiatus. The previous episode “Revelations” had ended on a stunning cliffhanger — the fleet had finally discovered the lost planet of Earth. Unfortunately, this triumphant arrival quickly turned into a post-apocalyptic nightmare. The final shots showed the characters standing on the desolate wasteland in complete disbelief at their misfortune. How would they cope with yet another setback in this long and painful journey? Would they grit their teeth and go on, or was it time to just give up hope? 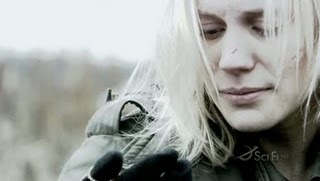 This episode is packed with plot revelations that have been building since the start, but the scenes that resonate strongest involve the stark emotional reactions of the Galactica crew and their Cylon allies. Kara “Starbuck” Thrace (Katee Sackhoff) makes an unbelievable discovery that raises questions about her very existence. The Cylon Leoben (Callum Keith Rennie) had served as a spiritual advisor to Kara and pushed her to discover the truth. At this moment, however, their find is too shocking for him to take. Leoben basically says “I’m outta here!” and drifts into the distance because of his shaken faith. Sackhoff plays Kara’s desperate pleas of “what am I?” perfectly and it’s one of her finest moments.

One of the big questions raised in post-apocalyptic stories is whether life is even worth living. Should we continue to struggle when so many have been lost? After discovering the dead Earth, you can see the devastation in everyone’s eyes. Even for a risk-taking show like BSG, it still seemed unlikely that they would actually push a major character over the edge. However, Moore and Eick have sidestepped our expectations at every turn. When a likable character commits suicide, it’s a nasty blow to us and the characters. In his podcast commentary, Moore admits that it’s a “sucker punch” to the audience. That said, this choice makes sense given the dire situation facing the fleet. It supports the soul-crushing effects of their loss of the dream of Earth. This is not something that everyone will forget about the next week. 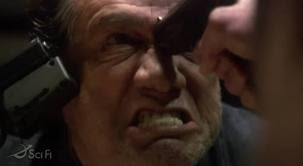 This loss of life is the last straw with Admiral Adama (Edward James Olmos) that leads into one of the nastiest conversations in the show’s history. Grabbing a sidearm, he strolls through the decks of the Galactica, where crew members are fighting, crying, and just sitting lost to the world. They’re inches from heading into pure chaos. Adama arrives at the cabin of his best friend Saul Tigh (Michael Hogan), who now represents everything he hates. Spitting out his vile words and urging his friend to act, Adama shows how far this once-stoic man has fallen. The emotions reach the level of a dramatic stage play, and these actors give everything they have, especially Olmos. It’s a perfect example of why BSG rises above other genre shows and ranks with The Wire and Lost as the best series of the past decade.

“Sometimes a Great Notion” ends with the revelation fans had been anticipating for the entire season. We finally learn the identity of the final Cylon, but it’s also a big surprise because it arrived so early. Many fans (including this one) were expecting this answer to stay unknown until the last few episodes. The great part about revealing this Cylon now is that it gives this character a chance to play a major role beyond solving the mystery. The final shots of a stunned lone figure standing in the wasteland provide a classic ending to one of BSG's greatest episodes.
TV Review