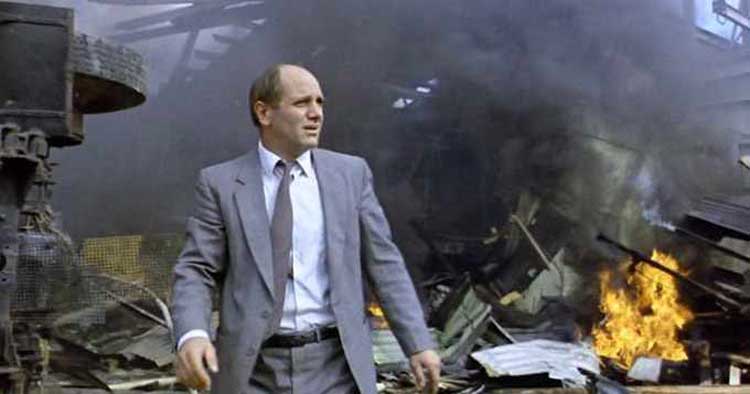 Now that we’ve entered the stifling heat of summer, I figured this was the perfect time to check out some movies that present our world nearly destroyed. These post-apocalyptic films aren’t always uplifting, but they show filmmakers creatively attempting to connect the disasters with our current actions. There’s no better setting than the end of the world to cover deep thematic material. Many fail completely, but you can’t blame them for trying. I have already seen many of the popular choices from this genre, including The Road Warrior, 28 Days Later, and The Omega Man. This forced me to dig a little deeper when arranging this marathon. The first choice is The Quiet Earth, which shows an empty New Zealand following a cosmic event.

Zac Hobson (Bruno Lawrence) wakes up one morning and makes a shocking discovery — he may be the only person left on Earth. He wanders around New Zealand and tries to understand the situation while slowing going crazy. With little hope left, he meets the attractive Joanne (Alison Routledge) and strikes up a relationship. The arrival of the trucker Api (Pete Smith) changes their bond, but there’s a larger threat on the horizon. It’s possible that the event could happen again, ending their lonely existence.

Director Geoff Murphy (Freejack) presents a convincing world because he doesn’t overplay the situation. It would be easy to attempt inventive shots to reveal what it’s like to be completely alone on Earth. But there’s no real need to mess around. All Murphy needs to do is shoot the empty city streets to convey Zac’s isolation. The footage of the vacant city likely inspired similar moments in 28 Days Later and Vanilla Sky. The absence of CGI actually helps in this case because Murphy’s not tempted to waste time developing the environment. The limited technology, combined with a modest budget, kept the focus on the characters, which helps us connect with their plight.

Zac starts as a stuffy scientist, but surprising revelations shows the humanity that shines through. When he begins going crazy and puts on a dress to perform for an empty world, it shows how even a loner can’t survive without a few friends. When Joanne arrives, it’s like an angel swooping in to save his soul. Api’s stoic approach makes Zac seem like a party animal, but we also don’t spend nearly as much time with him. He arrives near the end and creates a rift, so it’s tougher to like this guy. In his first movie role, Hobson mostly underplays his role, which is the right way to go. The others struggle at times, particularly with the emotional scenes, but their work doesn’t hurt the movie.

Zac has two main quests: learning the reasons for the catastrophe and finding other people (if they exist). He discovers a few dead bodies along the way, including the grisly image of his boss slumped over the controls of their top-secret facility. It takes a while before Zac begins doubting whether his actions even matter. He may be stuck in an empty world and doomed to a maddening solo existence. The others’ arrival refocuses his efforts, but strange events hint that his quest may still be futile.

Although it lacks the ridiculous antics of Charlton Heston like The Omega Man, this movie includes some tragically comic scenes. The best involve watching Lawrence go crazy, especially his “performance” that I mentioned earlier. After taking over a fancy mansion, living in luxury isn’t enough to keep him from losing his marbles. Of course, they didn’t have DVRs, IPods, and the Internet back in the ‘80s. I’m thinking the only thing that would help me catch up with my recorded TV shows and movies is this type of dire event. Of course, as we see in this movie, the power stations only keep functioning for so long. The other classic sequence is the surreal event that involves a possible splitting of the characters from our dimension. The creative mix of bright colors, strange gravitational forces, and other mysterious images are the most haunting images from the movie.

This story contains statements against humans meddling with scientific forces we don’t understand, but it’s never too over-the-top. The Quiet Earth is based on Craig Harrison’s novel, so I’m unsure of how close this story and the message adhere to the source material. The obvious thematic connection is the real-life creation of the nuclear bomb and its potential destruction. Although it was winding down, the Cold War was still in place in 1985. The novel was written four years earlier, so the climate was even more divisive at that time.

The Quiet Earth feels a bit hokey at times, and the slow pace isn’t always fascinating, but it leaves a powerful impression. The final scene (which I won't show here) is intriguing because it explains little and is open to many interpretations. The mystery is enhanced by a gorgeous outer-space image that ranks among the classic finishing shots of the sci-fi genre.

The Book of Eli
Carriers
The Postman
On the Beach